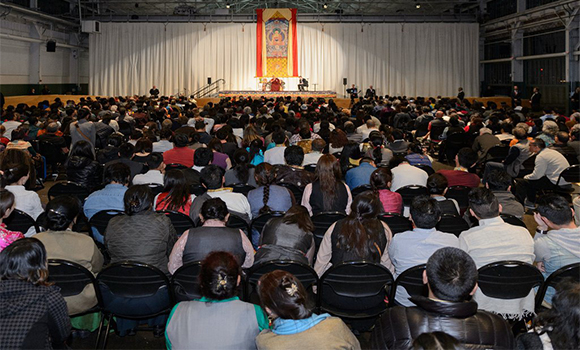 (March 19, 2015, San Francisco, California) After delivering a public teaching in the morning and visiting the Kagyu Droden Kunchab center and American Himalayans Foundation in the afternoon, His Holiness the Karmapa continued devoting time to connecting with Tibetans. At the invitation of the Tibetan Association of Northern California, in the evening His Holiness the Karmapa proceeded across the bay to Richmond to deliver an address to over 1,300 Tibetans from around the region.

The event took place in a warehouse space on the waterfront. The setting was reminiscent of His Holiness the 16th Karmapa’s first major Dharma activity in San Francisco in 1974. At that time, thousands of people had crowded into a harborside hangar in Fort Mason, right across the water from where the 17th Karmapa addressed the Tibetan community.

This time, the 17th Gyalwang Karmapa spoke to a gathering of over 1,300 Tibetans, who had assembled from all across northern California and beyond.

Addressing this gathering of the Tibetan community in diaspora, His Holiness spoke from the heart, describing how important it was to him to have such opportunities to meet with his fellow Tibetans, and reflecting on ways to address the challenges that Tibetans collectively face as a people in exile.

“I’m always very happy to meet with members of the Tibetan community wherever I go in the world,” he told the large assembly. “These opportunities to meet together with you are very important to me. This is because we are all the same in terms of being Tibetan. We are all refugees, we have all been separated from our homeland and we all share the same sorrows and joys in connection with our experience as Tibetans.”

His Holiness the Karmapa reflected that since Tibetans living in the United States have the tremendous good fortune of seeing and receiving advice from His Holiness the 14th Dalai Lama frequently, as well as other great masters of the various traditions of Tibetan Buddhism, he himself did not come prepared with anything in particular to communicate to them. “Nevertheless,” the 17th Karmapa said, “since we are all Tibetans, we are like one big family, and one does not need to prepare any kind of speech to give when you meet your own family members. Since we’re all family, I feel it would be suitable for me to share some spontaneous thoughts and ideas with you this evening.”

In perfect keeping with the sense of a family gathering, the discourse was punctuated by the delighted shrieks of children playing together at the far back of the vast space. Parents had brought their children, and the far end of the hall served as a makeshift playground for them. His Holiness at a certain point quipped that he might need to speak louder to be heard over the children, but this just seemed to make them louder. Old, young and the very young were all turned out in traditional Tibetan attire.
He began reflecting about the overall state of the Tibetan refugee population worldwide, noting that although Tibetans have scattered to many areas of the globe, those Tibetans living in the United States have many opportunities to come together as a community, since so many important leaders do visit the USA often.

“It is very important for Tibetans to come together when such occasions arise,” he said, “because when we are scattered, we tend to begin to forget our collective situation and our collective condition, and focus more exclusively on our own individual lives, as opposed to what’s going on with everyone else. These gatherings are an important reminder of what our collective situation is like, how we’re doing as a people in general. It is a chance for us to remind ourselves of this, and refresh our concern for one another and our support and closeness to one another. I think it is important for us to use these opportunities to try to gain a sense of continuous harmony, cooperation, and friendliness with each other. Harmonious cooperation is actually the most powerful force in any society to bring about positive change.”

He encouraged the Tibetans living in diaspora to make special efforts to ensure that their children grow up knowing not only the Tibetan language but also its culture more broadly.

“I am not saying this is just your responsibility alone,” the Karmapa said. “We all share this responsibility together, so I think it is very important for us to think together about ways that we can take this seriously and be effective in our goal to share the Tibetan culture, language and so on with our Tibetan children.”

Even as he stressed the importance for young Tibetans to embrace Tibetan culture and language, he continued to reflect on ways to ensure that second- and third-generation Tibetans growing up in diaspora do not come to feel that their identity as a Tibetan is at odds with their identity as a member of whatever community they are living in. “Our project,” he said, “is to figure out ways to make Tibetan culture relevant for them in such a way which it does not force them to struggle against the culture that they’re living in. We need to figure out how to get the Tibetan culture to be a harmonious fit with the culture that surrounds them, so that what we are giving our children in terms of Tibetan culture on the one hand is not in conflict or constantly struggling against the culture that surrounds them. We should try to make these two things harmonious with each other.”

He added, “I am not saying that we should try to get our children to seize and hold to Tibetan culture to the detriment of their learning about the culture that surrounds them. That wouldn’t be skillful. Sometimes what happens is that the Tibetan traditions and cultural habits and so forth that we try to teach our children are seen as just an old way of doing things, an old tradition, whereas our children are surrounded by the culture that they live in which is filled with new ways of doing things.

“One of our biggest challenges as a community is to figure out how to take away that sense of struggle and teach them Tibetan culture in a way that harmonizes with the culture that surrounds them in a more general way. I think that one key avenue might be some connection with the dharma centers. There are many different dharma centers in the US, and some of these dharma centers are quite well developed in terms of the resources they can bring to bear. Perhaps there be could be a closer interface with the dharma centers, as well as more activity amongst various Tibetan community groups.”

The 17th Karmapa further observed that Tibetan society in exile has come to adopt greater diversity of opinions than had been the case previously in Tibet. Given not only their geographic dispersal but also the acceptance of greater diversity of view, the 17th Karmapa said that it was absolutely crucial that the Tibetan people stand united behind His Holiness the Dalai Lama’s leadership.

He observed that even around buddhas there may be conflict. Speaking of Tibetan society in general, the Karmapa said, “We do have a few problems here and there, but just think of how many more problems we would have without the unifying leadership of His Holiness the Dalai Lama, which brings us all together in a harmonious way. If we proceed in that way it’s no problem at all. There will be diversity of opinions, diversity of thought and diversity of views among us. We can still bring that diversity on the path and use it for the benefit of others. But if we don’t recognize His Holiness’s precious leadership and allow that to unify us and hold us together then I think we are not looking good in terms of where we are heading in our future. Therefore it is very important to appreciate this and move forward together in unity.”