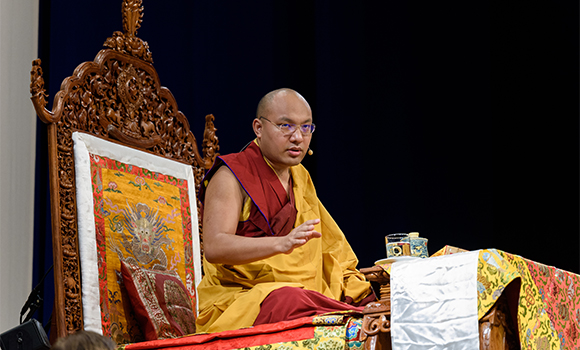 Increasing our Compassion: A Meditation Instruction and Transmission of All Pervading Benefit of Beings

A major theme during His Holiness’ second visit to Europe is how spirituality can be integrated into our everyday lives. Yesterday, when speaking of the need to develop empathy and compassion, he used the refugee crisis in Europe as a real-life example. He developed this further this morning when he referred to two recent events: the discovery of the bodies of 71 migrants abandoned in a truck in Austria, and the hundreds of migrants feared drowned when two boats capsized off the coast of Libya. “It is not sufficient to just say, ‘Oh those poor people’, and have sympathy,” he commented. “We should give rise to genuine compassion… genuine involvement, and more action.”

His Holiness acknowledged that, given our relatively comfortable existence, we often find it difficult to fully empathise with the suffering of others, but if we wish to practice genuine compassion there should be no sense of separation between ourselves and the object of compassion. If we can use our imagination skillfully to truly identify with the sentient beings who are suffering, we can generate true compassion which “goes beyond dualistic concepts, beyond perceiver and perceived, and beyond separation between the generator of compassion and the object of compassion,” he advised. Taking refugees as an example, he described how. “We should use our imagination to identify ourselves as refugees. In that way we will be able to make a more intimate connection with their suffering and experience… to actually feel that suffering and undergo the experiences the refugees are undergoing.”

The refugee crisis also clearly demonstrates the nature of the interconnectedness which transcends man-made borders. Europe is experiencing the results of instability in the Middle East, he said.

To carry a sense of personal responsibility when witnessing such suffering can be very daunting. It can feel like a heavy burden to bear. However, if we operate from the basis of true compassion, such situations can become a source of strength and courage and inspiration.

On Thursday His Holiness had explained that he intended to give a special gomlung [meditation instructions and transmission] rather than the empowerment of Four-Armed Chenrezig originally scheduled. This gomlung of the Chenrezig liturgy All Pervading Benefit of Beings: The Meditation and Recitation of the Great Compassionate One belongs to the lineage of the siddha Thangtong Gyalpo, who was renowned in Tibet for many things: he lived an extraordinarily long life, dying in his 125th year; he recognised and taught the first Dorje Phagmo; and he is also venerated as the originator of the Tibetan operatic tradition, lhamo.

During his teachings, His Holiness has been emphasising that compassion is active not passive, and Thangtong Gyalpo is a great example of active compassion. Out of his concern for the people, who had no easy way to cross the great rivers in Tibet and Bhutan, he organised an extensive programme of iron chain bridge and ferry building across the region. For this reason, he was nicknamed Iron Bridge Builder [Tib. chakzampo], and the lineage he founded is known as the Iron Bridge tradition of the Shangpa Kagyu.

There followed a short Refuge Vow ceremony, which His Holiness prefaced with a short explanation of the nature of the refuge vow as “mainly promises we make to ourselves, agreements we make with ourselves”. The refuge vow precepts are supports for maintaining our promise in a continuous way. “Some people worry that they shouldn’t take the refuge vow,” he commented, “because they feel they won’t be able to continuously keep the precepts. They don’t need to worry because the desire to make a promise or agreement is up to oneself… If you have a natural inclination or sense of enthusiasm towards maintaining the commitments of the refuge vow, then the precepts will come naturally to you.”

The Karmapa then began guiding his audience through a practice session of the shorter version of the Chenrezig liturgy from the Iron Bridge tradition. He explained the visualisation of Chenrezig for each stage, and the audience was asked to focus on the visualisation as he read that portion of the sadhana. During this transmission, he raised two topics of general importance to practitioners.

“Visualising Chenrezig from within this state of being moved,” His Holiness said, “our practice will definitely be one of living compassion. That is the best way of doing this practice rather than focusing on the visual details.” We should understand that the form of the deity is not like a sculpture but “a living being and living compassion”.

Secondly he spoke about the 6-syllable mantra of Chenrezig: Om Mani Padme Hung.
“When we recite the 6-syllable mantra, each of the 6 syllables of the mantra corresponds with liberating one particular realm from among the 6 realms of samsara. Each of the 6 syllables performs the function of liberating all the beings of one specific realm of the 6 realms of samsara.”

Finally, His Holiness concluded the practice session by dedicating the merit so that all sentient beings might benefit. In the evening he would return to the theme of compassion once more, this time exploring its role in protecting the environment.