Inaugural Meeting of the Karma Kamtsang Directors of Publications 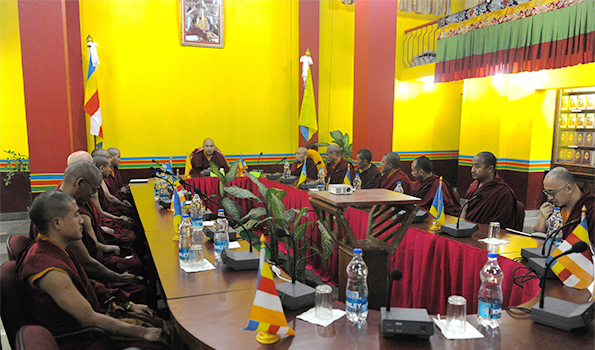 For the purpose of establishing cooperation and unity between the publishing groups of the different Karma Kamtsang monasteries, His Holiness called a meeting of their leaders at Vajra Vidya Institute, Sarnath. Khenchen Thrangu Rinpoche graced the conference with his presence, offering his full support and encouragement towards this important endeavour. As His Holiness explained, until now, the publishing groups of the different monasteries have been working hard within their own spheres, but because of a lack of communication between them, there have been some problems such as multiple printings of a common text, while more rare and important texts have been overlooked. Since the readership of Tibetan is relatively small, he expressed that it is important for the groups to come together to pool their resources, and share the responsibility for preserving the full Karma Kamtsang textual tradition and the Buddha’s teachings in general.

His Holiness pointed out that, of the three kinds of activity of a master – those of body, speech and mind – it is the speech activity which is principal. Why? Because it is through his or her speech that the Dharma can be preserved and remain accessible to future generations of students. For instance, if a great and scholarly master appears in the world but does not compose texts or offer teachings during their lifetime, within a few generations, it will be as if that guru had never appeared on the earth. And furthermore, if the writings and oral teachings of past and present great masters are not preserved, then likewise, we lose a great treasure.

In this vein, His Holiness wishes to publish this coming year the full compendium of the 16th Gyalwang Karmapa’s works, as well as an album describing his life. He also presented a list of texts from past lineage masters which would be important to publish soon. Furthermore, he expressed the importance of preserving the teachings of present lineage gurus as well, and recording their life stories.

Two important items that His Holiness introduced to this group are the need for a uniform design for all the books published by the monasteries, and the need to develop a more sophisticated computer program for correcting and preparing the texts for printing. With regards to design, the group discussed in some detail the different aspects of layout and cover design, acknowledging that though the styles used in the Western and Chinese traditions can helpfully inform the printing of Tibetan texts, it is nevertheless important to find a design that is particularly suited to the Tibetan language and readership. The layout needs to make the texts more accessible and also respect the correct forms of the written language.

His Holiness had clearly spent considerable time considering how the current computer program for imputting and correcting texts could be improved. He offered a detailed description of what a new program should look like and what functions it should perform. In fact, preliminary work on the program has begun, and His Holiness has named it Ketaka, after a certain jewel stone that was used in former times to purify water. The texts need to be cleansed of the impurities of spelling errors and such which cloud and confuse their meaning, and thus to become high quality reliable wellsprings of Dharma.

The assembled khenpos and publishing directors discussed with His Holiness many aspects of the work of publishing, from Tibetan punctuation rules to finances to long term vision. They participated with energy and interest, sharing their thoughts and experience. This was an inaugural event marking the beginning of a new stage of development of publications within the Karma Kamtsang mandala. As per His Holiness’s direction, the groups will continue to meet yearly and even more regularly at a local level.

His Holiness Participates in End-of-the-Year Mahakala Puja
On February 25th, His Holiness attended the first session of the annual Mahakala puja at Vajra Vidya. This puja is traditionally performed at the end of the lunar year to clear away obstacles before the new year begins. Khenchen Thrangu Rinpoche, Tulku Damchoe, eminent khenpos, monks, nuns and lay people all gathered to participate. This year we recited a new Mahakala text, composed by His Eminence Gyaltsab Rinpoche.