Throughout Tibet and China, many monasteries were 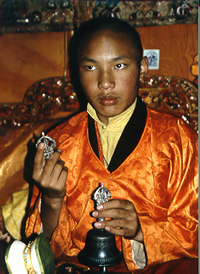 destroyed during 1959 and the Cultural Revolution. Tsurphu was no exception, suffering very heavily. This beautiful seat was completely destroyed and was left in total ruin in 1966. No inhabitants were able to remain there; after the destruction you could see from a distance only the the remnants of a mostly collapsed and ruined wall.

In early 1980, when the communist Chinese government opened the Tibet-Nepal border for older Tibetans to visit family and relatives, His Holiness the Sixteenth Gyalwa Karmapa instructed Venerable Drupon Dechen Rinpoche to go back to Tibet to reconstruct the original seat, Tsurphu Monastery. Reconstruction of Tsurphu was extremely difficult because Tibetan people were very poor and any support they could provide was very limited. However, through the tireless effort of Drupon Dechen Rinpoche and the devotion and dedication of the Tibetan people, many aspects this large complex was rebuilt. After many years of hard work and dedication they completed the partial rebuilding of the main shrine and some of the other parts of the development.

Upon the return of the Seventeenth Karmapa, Ogyen Trinley Dorje, the reconstruction was brought to a completely different level. Most of the original Tsurphu Monastery complex was restored and a new shedra, or monastic college, addition was built. Many devoted students and followers of the Kagyu lineage visited His Holiness Karmapa at Tsurphu and donated their services for the effort of rebuilding the original seat at Tsurphu Monastery.

NEXT: ESCAPE
This site uses cookies to ensure that we give you the best experience on our website. If you continue to use this site we will assume that you are happy with it.Ok