In Praise of the Gurus 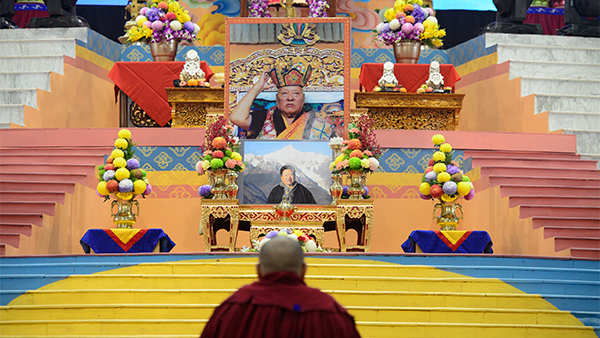 Although still cloudy, the land was clear of mist and fog this morning, when the gong sounded clearly across the Garchen at 3.00am, waking the monks and nuns in order to attend the full-moon day sojong for ordained sangha at 4.00am, administered by Khenpo Lodrö Dönyö Rinpoche. Laypeople began arriving at the Monlam Pavilion two hours later to receive the Mahayana Sojong vows bestowed by the Gyalwang Karmapa.

On the top tier of the stage, the great tormas rose magnificently, set against a translucent blue sky peppered with white clouds, projected on to the new screen background, installed three days ago. This screen will be used for visual effects during the Marme Monlam on 16th January, and stretches the width of the stage, concealing the painting of Mt. Kailash.

The Karmapa sat facing the congregation  on a low seat,  flanked by Gyaltsab Rinpoche and Jamgon Kongtrul Rinpoche. Behind, a row of Chinese-style festive banners had been hung, eight on either side.

After giving the sojong vows, His Holiness gave a short talk, explaining the prize giving ceremony which would take place in the afternoon and the importance of the ritual texts- the 13 tantras of Marpa- which were being preserved by individual monasteries at his request.

As the morning session of the Twenty Branch Monlam progressed, the gelongs and Rinpoches seated on the Monlam stage, donned their yellow tsesha, representing a pandit’s hat, and His Holiness climbed the steps to the small shrine of Buddha as an infant which stands midway, directly below the large golden Buddha and the altars. There he assumed the role of ritual master, performing the different mudras and offerings which accompany the twenty branches – including incense, symbolic washing and drying, and anointing with precious oils.

Traditionally, the second and third sessions on the last day of the Kagyu Monlam are dedicated to the Lama Chöpa: Offerings to the Gurus. October 2013 saw the death of two important Rinpoches within the Kagyu tradition and, as the Gyalwang Karmapa explained,   the first session of the Lama Chöpa this year was dedicated to their memory.

The first to pass away was Kyabje Chagme Rinpoche who died in New Delhi. In his late 80s, Chagme Rinpoche was a senior and highly respected master holding both Kagyu and Nyingma lineages. He was the head of Nyedo Tashi Choling Monastery in Nepal, and was widely renowned for his skills in astrology and Tibetan medicine. In particular, Rinpoche was esteemed for his ability to cure different diseases and was sought out by people all across the Himalayan region. Chagme Rinpoche’s previous incarnations had played an important historical role. The 1st Karma Chagme Rinpoche ensured the continuity of many Karma Kagyu lineage transmissions and practices at a time when they might otherwise have been lost.

Later the same month, Kyabje Dr. Akong Rinpoche was tragically killed in Chengdu, China. With Chogyam Trungpa Rinpoche, Akong Rinpoche founded the first ever Buddhist monastery in the West at Samye Ling in Scotland. After Chogyam Trungpa Rinpoche moved to the USA, Akong Rinpoche continued the work at Samye Ling, promoting the work of the Kagyu lineage throughout the U.K. and parts of Europe through the Samye Dzong organisation. At Samye Ling and Holy Isle he built retreat centres and a shedra [institute for Buddhist studies]. He was also involved in the search for the 17th Gyalwang Karmapa, and accompanied His Holiness to Tsurphu near Lhasa in Tibet.  However, for many Tibetans, his most important contribution was his social work in Tibet through his organisation, Rokpa. He built and supported orphanages, old people’s homes, hospitals and schools, in addition to supporting monks and monasteries.

Two large portraits were placed in a central position on the middle tier of the Monlam stage. After the offerings to the shrine, His Holiness presented katags to the portraits and the Lama Chöpa ritual included a special mandala offering to the two lamas.

After the lunch break, the Lama Chöpa ritual continued.