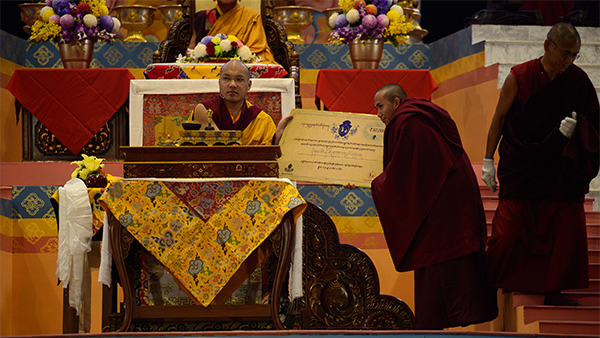 The Final Session of the 31st Kagyu Monlam

A giant golden Buddha has replaced the thangka of Guru Rinpoche on the stage as the setting for the last day of the Monlam. Sixteen exquisite hand painted Chinese silk lanterns, eight on each side, are the ornaments for auspiciousness to close the mandala. Some of the lanterns have auspicious animals – tiger, lion, peacock, vulture, garuda- and others the 8 auspicious symbols and goddesses. Each cylinder is hanging with long gold decorative strands separated by crystal beads, creating a delicate, twinkling display of abundance.

With a sea of sangha surrounding him, the Karmapa honoured the monastics before going on to show his appreciation of the sponsors. As the main sponsor of this Monlam was Gyaltsap Rinpoche, the Karmapa first presented his entourage with representations of the Buddha in the form of statues and texts.

In the course of the evening, the Karmapa continued his support of both branches of his lineage, practice and study. He explained that in 2002, the monasteries had gathered for the first time at Vajra Vidya Institute, and during that meeting, the thirteen tantras of Marpa were distributed among twelve monasteries in India, Nepal, and Bhutan. A few days ago, the Karmapa had asked the monasteries to report on their performance of these tantras, saying that he would give to those who had continuously practiced their tantra, a set of thangkas of the yidams from the four tantras that had been commissioned and overseen by a previous Situ Rinpoche. The main discipline master read the names of the twelve monasteries and the reports of their practices as representatives came forward to receive a large rectangular box over which the Karmapa draped a long yellow kata.  These thangkas are essential references for visualizations, a fundamental part of Vajrayana practice.

During the Winter Debates, five scholars from other traditions had been invited to judge the debates. As the Karmapa explained, these yearly gatherings are fulfilling their purpose of raising the level of study in the monastic colleges. Beginning last year, prizes have been awarded for the best performances and this new tradition continues. The monasteries are awarded a trophy, a certificate, and a large donation. Suspense filled the Pavilion as the announcer repeated “And the prize goes to…” several time before giving the name.

Returning to the practice aspect of his lineage, the Karmapa next offered a beautifully printed and boxed text of three major practices for the Kagyu, Bernakchen, Dorje Pakmo, and Gyalwa Gyamtso, to representatives of the sixty-two institutions (monasteries, retreat centres, and monastic colleges), which came to the Monlam.

Usually in his closing speech, the Karmapa expresses his agenda for the year ahead but this time, it was late and therefore his speech was somewhat abbreviated. To make up for that, he generously proposed to fund new retreat centres so that practitioners could spend 5-6 months practising the Marpa tantras. In the spirit of giving everything he could to fulfil his activity as the Buddha Karmapa, he also offered to give the necessary empowerments and key instructions.

Amidst the waving of white scarves and the cries of Tashi Shok, the 31st Kagyu Monlam came to a close.

A blaze of good fortune, the ornament of the world!

In the realm and the kingdom of the land of Tibet

To the north of the Land of Snows;

May the teaching of the Practice Lineage flourish!

May the world have the good fortune of happiness!

We ask that the world be made happy!

(Prayers to Accomplish the Truth)