13 December, 2007: This year, there is a strict code of conduct which all gelong and gelongma attending Kagyu Monlam must observe. All gelong and gelongma will have undergone three days training and a test in this code of conduct. During the Monlam they will be expected to attend every Monlam session, including the daily Sojong. They will eat only from the alms bowl, not eat after midday, and, on the final day, they must join the Alms Procession.

At a special meeting for gelongma (Sanskrit: Bhiksuni), held in his private room at Tergar Monastery this morning, the Gyalwang Karmapa welcomed everyone who had come to attend the 25th Kagyu Monlam. He then gave a short talk, discussing the reasons why he had specially invited the gelongma to attend the Kagyu Monlam.

He recounted how, in 2004, when he took on the responsibility of overseeing the running of Kagyu Monlam, he began looking into the Vinaya and researching codes of conduct.

The Tibetan sangha has both gelong (fully ordained monks) and getsul (novices) but no gelongma (fully ordained nuns) only getsulma (novices). Yet, there are many gelongma from other traditions who don Tibetan robes. Because of his concern over the absence of the gelongma ordination in the Tibetan tradition, he began searching the Sutras and the Vinaya, looking more closely into the issues, trying to find a way in which he could help the gelongma. The more he studied, the more his interest and concern grew.

There was, however, an obstacle to this research, because, according to the Vinaya, a getsul is not supposed to study the gelong and gelongma Vinaya, and he himself was a getsul. However, because he is a doctrine holder and holds a position of great responsibility, he did study these texts, trusting that he would not incur any fault. After studying the issue, he felt deeply that if there were a gelongma sangha in the Tibetan tradition, it would be a glorious achievement.

Gyalwang Karmapa cited two reasons why it had been difficult to establish a gelongma ordination lineage in the Tibetan tradition.

Firstly, the Vinaya is the foundation upon which the Buddhist sangha relies, so changes are difficult to make. The constitution of a country cannot be changed immediately, but it can be changed through a lengthy process. Similarly, the Vinaya could be changed, but the process would be very slow. Hence, it would have been difficult to start the tradition of gelongma in Tibet.

Secondly, there is the inflexibility of some members of the sangha who think that there is no need for gelongma.

However, the Gyalwang Karmapa explained, it was his hope that the participation of gelongma in Kagyu Monlam, would eventually lead to the establishment of a gelongma sangha in the Tibetan Buddhist tradition, because their excellent conduct would bear witness to all of the grace of the gelongma tradition. He reminded them that they therefore had a responsibility to live up to these expectations.

Finally, he said he prayed that all the nuns would stay well and that no obstacles would arise, so that they could attend the Monlam from beginning to end.

He concluded by offering each gelongma a complete set of robes.

11 December, 2007:.At one of the last meetings with the Kagyu Monlam Committee members before the 25th Annual Monlam ceremony commenced, the Gyalwang Karmapa shared a clear and moving vision of how to realize the Kagyu Monlam most effectively:

HH Karmapa began his talk by clarifying the origins of the reasons and conditions for Monlam, explaining that Monlam means “aspirations”, giving as an example Shakyamuni Buddha. When the Buddha made the aspiration to attain the mind of enlightenment, he offered a simple bowl of soup. A bowl of soup seems a small thing, but he offered it with pure motivation of the ultimate aspiration for enlightenment. So, although small, its blessings pervaded the whole of space and benefited all beings.

Similarly, the power and blessings generated by the Kagyu Monlam depend on the pure motivation and aspirations of each individual participant involved. This may seem easy but in fact is not. Pure motivation requires one to put aside individual concerns and work solely for the benefit of all sentient beings, whose numbers are as limitless as space. Participants need to firmly establish this mindset before the Monlam starts. In order to accomplish this, we need a firm, stable foundation and strong motivation. Without this, when we are confronted with difficulties and stress, we will find ourselves prey to the afflictive emotions such as anger, pride or ego-grasping. Without this, it becomes extremely difficult to maintain both our motivation and aspirations, and without that, we will have lost the whole purpose of the Monlam gathering.

If pure, strong motivation extends from the very beginning to the very end, so all will be good in the beginning, good in the middle and good at the end. The purpose and fundamental root of the Kagyu Monlam is to remember the kindness of our Teacher, Buddha Shakyamuni, and to pray for the peace and happiness of all beings with whom we share this world. We are continuing and preserving a pure lineage which we must not blemish.

His Holiness warned that taking his remarks simply as “fine words” is not enough, and asked the Monlam participants to accept the great challenge to put the pure aspiration into practice. We need to integrate these words into our mind stream – developing loving kindness and compassion. In the end it all comes down to our own individual intention, whether it is vast and deep or shallow. Respect and co-operation are also essential so that we can become friends and develop harmony and peace, which can then extend throughout the world. If we become annoyed or angry or speak harshly or walk around with black expressions, we defeat the object of Monlam. Transforming the mind is difficult for beginners; it is easier to modify our speech and behavior. But if we are able to do just this, the purpose of Monlam will be achieved.

His Holiness recalled that he began working for the Kagyu Monlam after Bokar Rinpoche had passed away in 2004, stating: “At that time there was a question whether the Monlam would continue or not. I had already been preparing myself for the Monlam. Even though I had no organizational experience, I took up the challenge, out of a feeling that I had a close relationship with Bokar Rinpoche, and because I have so much support. When I look back over the past few Kagyu Monlams in which I participated, I feel we still have a lot to accomplish and a long way to go. It would be disappointing if yet another year of our lives were to go by without bearing fruit. So, while remembering the kindness of Lord Shakyamuni Buddha, and holding the benefit of all sentient beings firmly in our minds, let us dedicate ourselves to the root cause of the Monlam gathering for world peace, harmony and happiness for all.” – Tashi Paljor

11th December, 2007. In the afternoon of the 11th, the Gyalwang Karmapa attended a group photo session to memorialize the ending of their 11th annual Karma Gönchö. In the evening, the Gyalwang Karmapa watched the final Karma Gönchö debate as it took place in the main shrine hall of Tergar Monastery. Yongey Mingyur Rinpoche and all the Khenpos also attended. The finale of the debate was between all the eight monasteries who participated the Karma Gönchö. – Tashi Paljor

6th December, 2007. Representatives of the Jonang tradition of Tibetan Buddhism began celebrating its Sixth Monlam Prayer for World Peace at the Mahabodhi Temple in Bodhgaya on 6th December. The Gyalwang Karmapa was requested to attend the Monlam and lead the prayers, and His Holiness attended with Yongey Mingyur Rinpoche. When he arrived, he was welcomed by Chogtrul Ngawang TashiGyaltsen Rinpoche and Khen Rinpoche Choe-kyi Nangpa Chog of the Jonang Tradition. A great crowd of Tibetans, Indians, tourists, and well-wishers, many offering khatas, incense or lotus flowers, were also waiting to greet him.

HH Karmapa first visited the shrine room of the Mahabodhi Temple, where he prostrated and then offered a set of silk robes to the image of Shakyamuni Buddha. Afterwards he sat under the bodhi tree, in front of a crowd of about two thousand monks, nuns and laypeople and led the aspiration prayers. Following the prayers, Khen Rinpoche offered a Mandala to His Holiness, and then His Holiness gave the transmission [lung] of the Names of Manjushri [Jam-phel-tsen- choe] and a short talk, which highlighted the importance of both the Jonang Monlam and the contribution of the Jonang tradition to Tibetan Buddhism. – Tashi Paljor

On December 6th , the Gyalwang Karmapa presided over an examination of members of the sangha under a new code of conduct for monks and nuns, which is now mandatory for all members of the sangha attending Kagyu Monlam. The monks were examined by the Committee of Discipline Masters, appointed by His Holiness and headed by Yongey Mingyur Rinpoche.

The code of conduct focuses mainly on:

Later , in the evening, His Holiness called an assembly of all the monks participating in the Winter Retreat for Debate and Logical Study (Karmae Gonchoe), who are presently staying at Tergar Monastery. He personally instructed them on how to sit during prayers and how to recite the prayers with the correct melodies employing the properly concordant rising and falling of the voice, in preparation for the Kagyu Monlam Chenmo. – Tashi Paljor 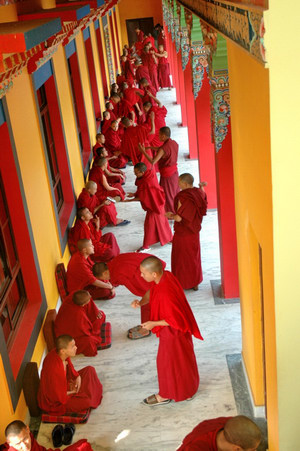 At the Winter Retreat for Annual Debate, monks line the corridors of Tergar Monastery in Bodhgaya to engage in debate over the logical tenets of the Buddhist study system

The 11th annual Karma Gön Chö Winter Retreat for Debate and Logical Study commenced on 12 November at Tergar Monastery in Bodhaya and is scheduled to continue through 15 December. Over seven hundred shedra monks have gathered here for this year’s Karma Gön Chö from institutions such as: 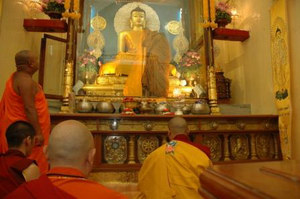 The Karmapa offers a robe to the image of the Buddha in the renowned Mahabodhi Temple in Bodhgaya. Ven. Bodhi Pal is standing on the left.

9th November: His Holiness left Gyuto temple for his winter tour, travelling by air to Delhi. There, the Secretary to the Bureau Office of His Holiness Dalai Lama in New Delhi and Karma Thopden, former Indian Ambassador to Mongolia and a Member of the Indian Parliament, received His Holiness at Radisson Hotel.

17th November: His Holiness left VVI by road to Bodhgaya in Bihar. On the arrival at Tergar Monastery at Bodhgaya, His Holiness was welcomed by hundreds of shedra monks from different Kagyu monasteries, who have assembled at Tergar for the 11th annual the Karma Gön Chö Winter Retreat for Debate and Logical Study. The monastics, along with their Serbangs, escorted His Holiness into the main shrine hall.

18th November, His Holiness inaugurated the exhibition of 8th century Tibetan artifacts by Dzongkar Choede Monastery, on display at the Mahayana Guest House in Bodhgaya. Later His Holiness visited the Mahabodhi Temple to offer a robe to the main Buddha statue. Ven Bodhi Pal of Mahabodhi Temple Management Committee welcomed His Holiness.