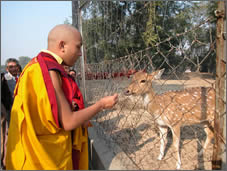 His Holiness communes with a deer in Varanasi in November 2004

His Holiness Karmapa has returned from an extended trip which took place through the end of 2004. The Gyalwang Karmapa arrived at Vajra Vidhya Institute in Varanasi on November 14, where he presided over the Karma Gön Chö, at which representatives of Kagyu monsteries from all over the world debated Kagyu philosophy and soteriology. In December, His Holiness proceeded to Bodhgaya for the annual Great Monlam Aspiration of the Glorious Unequaled Kagyu Sangha (Pal Nyammay Kagyupay Sangha Monlam Chenmo). Subsequently he returned to Vajra Vidhya institute, where he engaged in more prayers, including a service for the Tsunami victims. Some photos of His Holiness travels are available here.