His Holiness Karmapa’s Visit to Tilokpur Nunnery Monastery to Benefit the Monastery (February 19-26, 2007) 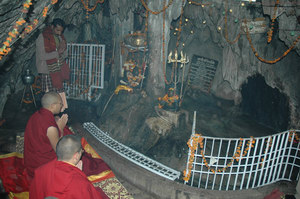 From February 19-26, His Holiness Karmapa visited Drubten Pemo Jalpay Gatsal, the newly constructed Tilokpur Nuns’ Monastery near Dharamsala in Himachal Pradesh. During his visit, His Holiness taught on the life of Tilopa and the 37 Actions of a Boddhisattva, as well as bestowed a number of empowerments. His Holiness consecrated a new temple at Tilokpur, as well as made a pilgrimage to the historic cave of Tilopa near the nunnery.

His Holiness made a short pilgrimage to Tilopa’s cave in the morning of February 20, 2007, accompanied by Gyaton Tulku from Sherabling. Later in the day were International Cultural performances, including Tibetan and Indian performers presented there traditional dance and songs.

His Holiness started the 21st with an insightful teaching on the life of Great Yogi Tilopa. Afterwards he conferred a long life empowerment and bodhisattva vows. An abundant gathering of international devotees, as well as numerous monks and nuns were in attendance. His Holiness performed a small Gya-lha puja on roof top at sunset. Afterwards, fire crackers lit the night sky. On February 22, His Holiness began teaching on the Thirty Seven Practices of a Bodhisattva, from the famous text written by Thogme Zangpo. The teaching on the 37 Practices continued until the 24th.

More on the Tilokpur nunnery