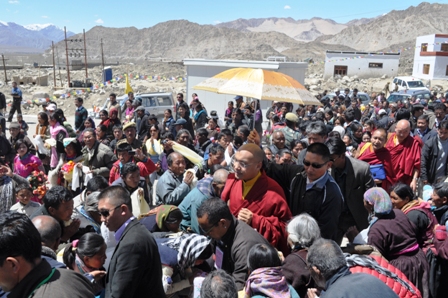 Upon arrival in Leh, Ladakh, His Holiness was welcomed with a traditional Buddhist reception. He was greeted by thousands of cheering people who had gathered in the airport and along the road all the way to the Jhokhang, the main temple of Leh city which houses the statue of Jho Rinpoche. Auspicious mandala offerings were made to him there and refreshments were served to everyone gathered.  After a brief prayer session, His Holiness then visited a photograph exhibit detailing the flood catastrophe of August 6, 2010, where hundreds of lives were lost.

In the afternoon, he had a private meeting with the Vice President of the Ladakh Gompa Association, President of the Ladakh Buddhist Association, and the Ladakh Buddhist Association Youth Wing. They reported to him the source, event and aftermath of the floods and the details of how the community has gradually recovered since then. His Holiness expressed his deep sympathies for the losses. He commented that he had had a strong wish to come immediately after the disaster to be with the Ladakhi people, adding that due to circumstances out of his own control, he was unable to. He expressed his deep affection and appreciation for the love and support that the Ladakhi people have for him. He said that it was most important to remember those who have passed away during this catastrophe and pray for their next lives. He praised the efforts made by the Indian Government, the State Government of Jammu & Kashmir, various NGOs, His Holiness the Dalai Lama, and eminent masters such as Gyalwang Drukchen Rinpoche, for all the rebuilding that has taken place since. 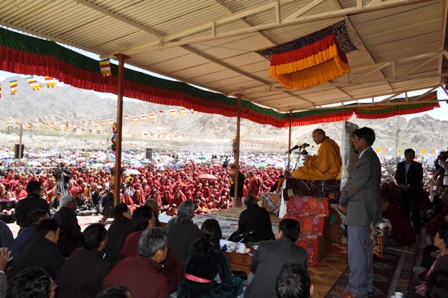 Accompanied by many Ladakhi followers, including prominent members of the Ladakh Gompa Association, Ladakh Buddhist Association, and Ladakh Women’s Association, His Holiness visited several flood affected sites during the second day of his visit to Ladakh.  His Holiness was greeted by devotees on the side of the road throughout the journey. On many occasions, he spontaneously performed blessing ceremonies for the people gathered there.

This first site His Holiness visited was Gangles Gonpa, where he was offered a mandala by the main monks of the monastery. Following this, he went on to Manetsalding, the main town area which was one of the worst-affected areas during the flood. His Holiness made heart-felt prayers in front of over 3,000 people who had gathered, for the future benefit of the people who had passed away during the tragedy. He advised those who had survived to focus on being kind to one another and to practice shinay (calm abiding) as a means of maintaining equilibrium. Since so many people have lost a dear one, he said, healing from this grief would come if everyone could extend their love for their near ones to those un-related to them. He concluded by appreciating the mutual love and care that the Ladakhi people have for him and that he feels for them, and said that he would do whatever he can in his capacity as a lama to help those who were affected during this tragedy.

His Holiness next visited Saboo, where the sorrow and heartache of the people was palpable and men and women both cried openly when His Holiness spoke to them.  He said that people should make deep aspirations for those who passed away, praying that their next lives would be better and free of pain. He said that he himself was continually making this prayer and had done so since the tragedy.

His Holiness then went to Tashi Gatsal, where the devastation was particularly acute. After the mandala offerings, he spoke to the audience gathered, gently reminding them of the healing powers of Dharma practice and asking them not to lose faith.

In the afternoon, His Holiness visited Phyang and went up to the mountain area, which is reportedly where the cloudburst water started accumulating. He preformed rabney blessing for the area and then visited Phyang Monastery, a well-known Drikung Kagyu monastery. The final visit was to Taru, to Bakula Rinpoche’s monastery. 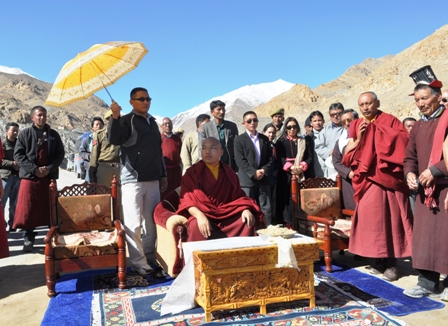 On the morning of the 26th, His Holiness gave a teaching to the general public at Jive Tsal, Choglamsar. Over 25,000 devotees were gathered at the Jive Tsal ground, having come from as far as Kargil, Nubra, and Changtang, dressed in their finest clothes for the occasion. The ground was ringed with shining white mountains under a cloudless blue sky, enhancing the festive and joyful atmosphere.

His Holiness began the teaching by asking everyone to participate in a minute of silence dedicated for the people who passed away during the flood in July. Following this dedication, he first apologized for not having been able to come to Ladakh immediately after the devastating floods in July last year, to share the grief and pain of the Ladakhi people. He praised the strong support and rehabilitation efforts of the Indian Government, the State Government of Jammu & Kashmir, and the many NGOs that stepped in to help Ladakh in its time of need. In particular, the visit by His Holiness the Dalai Lama, who came and shared his loving advice with everyone, as well as the caring and concern of Gyalwang Drukchen Rinpoche and other eminent masters, would have sustained especially those who suffered from grave personal losses, he said.

His Holiness expressed his confidence that Ladakh would overcome this disaster.  “In India,” His Holiness said, “a great democracy with freedom of religion, and equal opportunities available for education and self-betterment, the Ladakhi people can rightfully strive for a great future. This is not true in the case of Tibet.” The Gyalwang Karmapa referred specifically to a young monk who self-immolated at Kirti Monastery in eastern Tibet as an act of protest in March this year. His Holiness had been greatly saddened to hear this news and to know that freedom of religious practice continues to be restricted and that the Tibetan people’s human rights are so greatly repressed. He said, “The situation is very intense for Tibetan people with no room for them to express any freedom and communicate with each other and the outside world without barriers.” He added his support to the concerns expressed by His Holiness the Dalai Lama, Kriti Rinpoche and others who have appealed to the Chinese authorities for a restrained reaction to this recent situation. 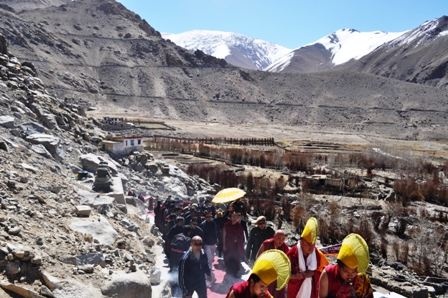 He observed that Ladakh had the great good fortune of favorable outer and inner conditions for dharma practice and added that if one were able to harness inner resolve and perseverance, one could own the dharma. He said that if we are born into a Buddhist family, we can cultivate the habits of mantra recitation and prostrations without really understanding why we are doing this. Therefore, it is very important to ask why one is a Buddhist and what one’s own practice actually means. Being a Buddhist is not all-important, he added. Ladakh has many different religions that exist alongside each other and all people should give respect and caring to one another, regardless of such differences, especially since everyone has suffered together so greatly. He went on to stress the importance of a good heart and said that happiness can be achieved only when it is shared with others and this communal sharing is what will heal the Ladakhi people.

He concluded with lungs (reading transmissions) for several practices including Chenrezig and Tara, which he hoped would help alleviate the grief.