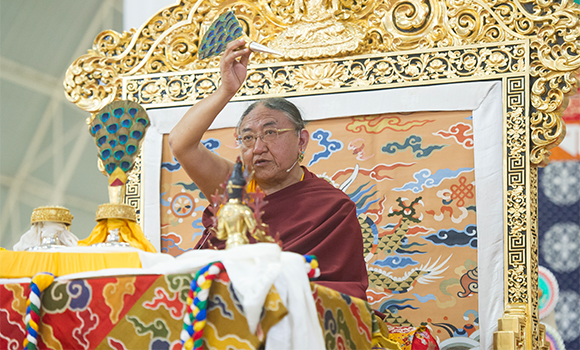 20th December, 2014 – Monlam Pavilion, Bodhgaya
The stage at the Monlam pavilion is set with exquisite attention to detail for the Muni Trisamaya Vyuhaempowerment of Buddha Shakyamuni. A gold leaf pagoda with wind chimes hanging in each corner, and golden auspicious symbols embossed on green panels, contains the mandala of the deity. Large ornate carved offering bowls sit on its rim. At centre stage is a floor to ceiling appliquéd Buddha Shakyamuni thangka. Behind that to the left is a smaller golden statue of Buddha Shakyamuni. A screen with the kings of the four directions painted in the Chinese style is placed at the forefront of the stage so that preliminaries for the empowerment can be conducted in private. From the ceiling inverted silken petals drape the overhead lights like chandeliers. Garlands of marigolds hang from horizontal ceiling banners. The assembly of more than four thousand monks and nuns in golden prayer shawls stretch out like an undulating sea. Behind them sit nearly four thousand laypeople.

While the gyalins announce Sakya Trizin’s entrance, the Karmapa, Jamgon Kongtrul Rinpoche and Gyaltsap Rinpoche enter quietly from the side and stand waiting for HH Sakya Trizin, who is ushered in by a regal monastic procession. He sits behind the Chinese screens to prepare the initiation. The monks chant ‘Namo Shakya Munaye’. HH Karmapa then unveils the masterpiece, a majestic golden throne with golden carved Ashoka lions on black panels at the base, and wide steps as if leading to Akanishta heaven. He inspects it to see that it is set up properly.

All the masters prostrate three times to the Buddha and HH Karmapa escorts his illustrious guest to the throne. His own low throne is to the side of Sakya Trizin’s. To the Karmapa’s right are the two royal lineage sons and to his left are Jamgon Kongtrul and Gyaltsap Rinpoches. The entire assembly then rises to prostrate in perfect unison to the sound of the vajra master’s gong.

In a private interview the day before the empowerment, HH Sakya Trizin explained the connection between the Sakya tradition and the Kagyu lineage.

When Buddhism came from India to Tibet it came in two different periods. The earlier was the Nyingmapas. We are connected with the old school because the Sakya was founded by the Khon lineage who were direct disciples of Padmasambhava. After many generations they felt the time had come to found a separate school. The Sakya school was founded in 1073 and then it became part of the new translation group. Moreover many of the Karmapas and Sakyapa masters were exchanging teachings and initiations. That’s why the Karmapa is giving a series of initiations which came originally from the Sakya. The empowerment I’m giving is Buddha Shakyamuni. It’s tantra but this is Kriya tantra, the very basic tantra. Since it is basic, it’s like a bridge between Sutrayana and Mantrayana.

The main deity is Shakyamuni Buddha himself.  I feel it’s very important because the Theravadins and Mahayanists find it difficult to comprehend the highest deities. But this is Shakyamuni’s form so it’s a good way to connect the Vajrayana and other Buddhist traditions, the Mahayana and Theravada.

The 16th Karmapa was very kind to all of us. I met him in Lhasa in 1955 at a conference. I was very small and he was so kind to look after me. Since then I’ve known him and met him in India many times. The last time I saw him was when he was ill in Delhi and I offered him a long life ritual. He discussed some high initiations with me. He said it was very important for us to uphold the new tantras. He requested a Vajrakilaya initiation and offered me his gold watch.  At that time I had just received the collection of tantras, so he said it was very good I’d received the full circle of initiations and he also wished them to be given to his young tulkus. Now they asked me to give them the initiations.

During the empowerment His Holiness Sakya Trizin elaborated further. ”All the collections have come down to us and it is through the collections of Jamgon Kongtrul particularly that it has come down. If you talk about the lineage of lamas the primary lama, the root lama, is Shenphen Nyingpo. [Ngawang Lodrö Shenphen Nyingpo (1876-1953) was the 64th throne-holder of Ngor Monastery and the root teacher of HH Sakya Trizin.]  He received it from Jamgon Kongtrul Lodro Thaye himself. ”

”The Kagyu and Sakya are like children born at the same time. The place they come from is the same place.” Kunga Rinchen [the 16th Sakya throne holder, 1332-1399] who was predicted by the Buddha, was very careful about preserving practice and study in the Sakya tradition. He said the tradition from Marpa was excellent and he never refuted it.

Because of the 17th Gyalwang Karmapa’s kindness, I have the opportunity to give this empowerment, the great empowerment of Trisamaya Vyuha. The Buddha originally gave this empowerment to the bodhisattvas in the heavenly realm sitting on a lion throne. He taught the 100 syllable mantra of the Tathagata. The Buddha Shakyamuni has the ushnisha, is wearing the 3 dharma robes, and is surrounded by a retinue of bodhisattvas.

This is the Kriya tantra, said to be for those lesser individuals, less interested in the benefit of others, and focuses primarily on body and speech. It is said to be the foundation of all the different tantras. The source of all the Kriya tantras comes from the secret general empowerment. Among the particular empowerments, there are the vajra and pema families. Within this is the transcendent and worldly. This is the transcendent one, in the tathagata family, and a primary deity of the family. This is a perfect empowerment for now.

When we take the empowerments the most important thing is to have a good motivation. If we think to liberate only ourselves, that is not correct nor is it acceptable to have the motivation to achieve happiness in the next life. As this is a secret mantrayana vajra practice we must have an unadulterated attitude of revulsion to samsara.  All sentient beings have been our parents, even the harmful ones. We have to protect them from suffering and bring them to happiness. This is our responsibility. We are ordinary individuals but if we achieve perfect buddhahood, in any instant we’ll be able to protect all beings and bring them to happiness. The primary aim is to achieve perfect buddhahood to benefit all sentient beings. We need to have this kind of uncontrived motivation; not the motivation to remove obstacles or have wealth.

The empowerment then commences with a supplication to enter the mandala and a request to receive the empowerment. HH Karmapa wearing the Gampopa hat leads the mandala offering to HH Sakya Trizin. As the grains of coral-coloured wheat are heaped onto the silver mandala plate, the assembly chants the offering of the universe.

HH Karmapa, representing the assembly, throws the stick into the mandala. Then together with Jamgon and Gyaltsap Rinpoches, the three great bodhisattvas receive the vase empowerment. They all place the dhyani Buddha crown on their heads representing the sambhogakaya.

In his closing remarks, HH Sakya Trizin said, ”HH Karmapa has taken great interest in the Vinaya. He has vast activity particularly during Monlam for the conduct and rules of the Vinaya. I rejoice in this from the depth of my heart. The great forefathers said to train in the Vinaya as the foundation. Even if there are great yogis with realisation, it is great benefit for us to practice the Vinaya discipline. Likewise all of you,please put this into practice as he has instructed you. If we are teaching we need to do it truly and authentically. This is the best way for Tibetan Buddhism to flourish. We have to take this to heart. Our conduct should be in accordance with the Vinaya. Please keep this in mind. We have a profound connection between our dharmas. HH Karmapa is leading all the teachers who are holding the lineages.”

White scarves, like doves flying high in the air, soar through the vaulted Monlam Pavilion in celebration.