The Dalai Lama will deliver teachings on Nagarjuna’s ‘In Praise of the Transcendental‘ (jigten ley depar toepa), Atisha’s ‘Lamp of the Path to Enlightenment‘ (jangchup lamdron), Longchen Rinpoche’s ‘Mind In Comfort and Ease‘ (semnyid nyelso) and Tsongkhapa’s ‘Short Version of the Stages of the Path To Enlightenment‘ (lamrim dhuedhon).

As they receive teachings, Gyalwang Karmapa and Ganden Tri Rinpoche—the official head of the Gelugpa sect—are seated facing one another on thrones flanking the central throne of His Holiness the Dalai Lama. Also receiving the teachings is His Eminence Jamgon Kongtrul Rinpoche, as well as many other lamas from other traditions. 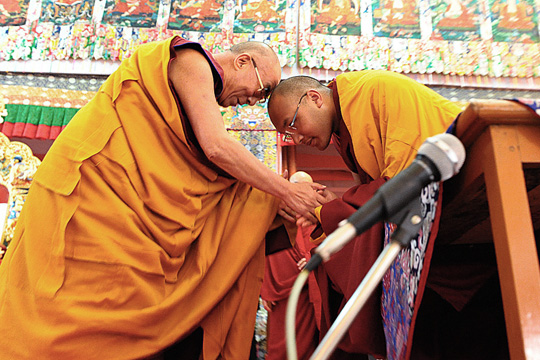