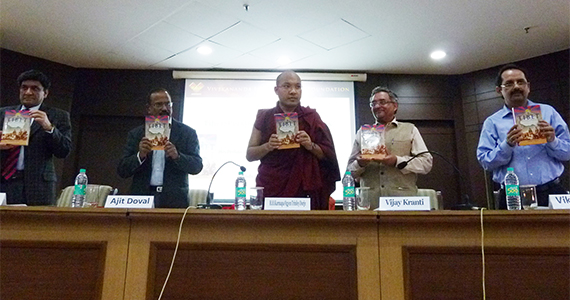 Speaking at the launch of a major new book titled ‘Tibet: Perspectives and Prospects’, edited by Prabhat P. Shukla, the Gyalwang Karmapa spoke of the profound and important relationship between the Tibetan and Indian nations.

“Because Tibetan dharma and Tibetan culture both come from India, it is important for us as Tibetans to appreciate what we have received from India and our tremendous and long-standing debt, both spiritual and cultural, to this country,” he said. “It is important for us to recognize that as Tibetans partaking of Tibetan dharma and culture, we are in a sense the children of India—that India is the mother of Tibetan culture and dharma.”

“The relationship between India and Tibet is not recent, and it is not temporary. It is a very profound relationship, more than one thousand years old. It is not merely political, it is not expedient, and it is not merely economic. It is the deepest possible relationship. It is a spiritual and cultural relationship that really reaches to the very depths of what it means to be Tibetan. This relationship is so important because it goes to the very essence of the identity of the Tibetan people, their dharma, and their culture. So therefore, the issue of Tibet is very much an issue that is especially relevant to India.”