Gyalwang Karmapa Gives Talk on the Preservation of Wildlife

His Holiness The 17th Gyalwang Karmapa gave a talk on the preservation of wildlife to the upper TCV (Tibetan Children’s Village School) students on Monday, June 29th. The talk was an awareness event co-organized by Wildlife Trust of India (WTI) and Care for the Wild International (CWI).

“Animals are not our enemies. We are all interdependent. Every animal has a role to play in the ecology by being a part of the food chain. If you remove one layer, the entire chain is affected. Even while talking in the interest of human beings, by saving wildlife, you are ultimately helping yourself,” His Holiness said.

The event was part of the Tibetan Conservation Awareness Campaign (TCAC), a WTI-CWI project aimed at spreading conservation awareness among Tibetans. The campaign was launched by His Holiness the Dalai Lama on April 6, 2005 to address the involvement of Tibetans in wildlife crimes and the use of wildlife articles in Tibetan medicines and traditional dresses.

“From the Buddhist viewpoint, we say every sentient being has been our mother in past lives. We believe in bringing no harm to all the sentient beings where animals are also included, but the ground reality is that this is being neglected. Some may believe that the environment is so huge that it cannot be affected by the action of one person. However, individuals can make lots of differences; the kind of difference, whether positive or negative, depends on the character and belief of humans.”

“We have observed a visible increase in awareness levels within the Tibetan community, but obviously our work is far from complete. The words of His Holiness Karmapa will help fortify our campaign and benefit the cause by leaving a lingering message in the minds of young Tibetans and adults alike,” Mr. Ashok Kumar Vice Chairman of WTI added at the conclusion of the event.

His Holiness was felicitated with the Wildlife Trust of India award. 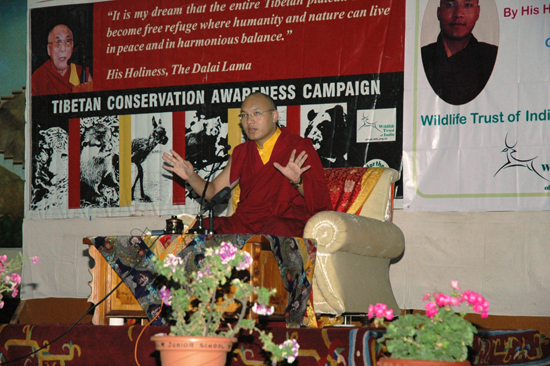 Gyalwang Karmapa gives talk on the preservation of wildlife.