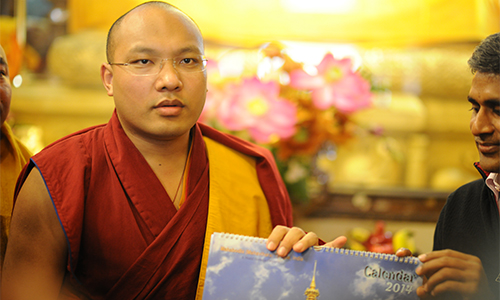 January 1, 2014 – Bodhgaya.
For most people the first day of 2014 was a holiday, but the 17th Gyalwang Karmapa’s day was filled with a range of activities combining duty, social activism and ritual.

It began with a Massed Clouds of Nectar Sang smoke puja offering in his golden tent at the centre of the Garchen, for purification and invocation of blessings. His Holiness was joined in the puja by Gyaltsab Rinpoche and other Kagyu tulkus and lamas.

Next, on the first day of the new year, His Holiness paid a visit to the holiest Buddhist site in the world, the Mahabodhi Temple. There he launched the official 2014 calendar of the Mahabodhi Temple Management Committee in the inner sanctum, before presiding over a session of the Jonang Monlam under the Bodhi Tree.

Back at Tergar in the Monlam Pavilion, His Holiness distributed blankets to people in need, before returning to his quarters at Tergar Monastery for private audiences.