Final Day of Autumn Teachings: Sharing Joys and Sorrows with the World

On the fifth and final day of his Autumn Teaching Series, the Gyalwang Karmapa continued linking wisdom and compassion, while shifting the focus from animals to human beings. To work for the welfare of animals, His Holiness observed, we need do little more than attend to their physical needs. Yet even this requires a great deal of knowledge. To much laughter, His Holiness related an anecdote about his own efforts to use a Q-tip to perform pulmonary resuscitation on a fly that had once fallen into a bowl of soup that he was eating. As difficult as it is to save animals, caring for human beings is far harder, he noted. Even should we be able to provide for their physical needs, human beings still have all sorts of complicated mental and emotional needs that are far harder to address.

In order to adequately care for the complex needs we humans have, ultimately what is needed is to be able to see into their inner dispositions and aptitudes. For this, nothing short of omniscience is required. However, His Holiness cautioned that we ought not to think that omniscience implies achieving a lofty birds-eye view of the world, or the ability to determine the exact number of insects on the planet at any given moment. Rather, omniscience is directly related to benefiting others. As such, the Gyalwang Karmapa suggested that we can aspire to attain a sort of omniscience within this life—an omniscience in which we come to know all the necessary topics, or know all that is directly needed to serve the purposes at hand.

In any case, His Holiness commented, whether we are experiencing pain or pleasure, happiness or suffering, we must always hold sentient beings in the corner of our mind and heart. In this way, we can aim gradually, step by step, towards the enlightenment that brings with it a buddha’s complete omniscience. Once we have reached that goal, the Gyalwang Karmapa said, this is not when our work ends, but when the real work of benefiting beings takes place.

The purpose of becoming a buddha is not to luxuriate in an exquisite pure realm, His Holiness stressed, but to be able to work most effectively for beings. When buddhas work, the Gyalwang Karmapa asked, where do they go? Where is their office? Their office is samsara, he replied. Our samsara is relatively small, His Holiness noted, compared to the vast samsara of all beings that buddhas voluntarily choose as their office or workshop.

With these comments, this five-day series of teaching on generating relative bodhicitta form this very embodiment of compassion neared their conclusion. The teachings were much enlivened both by His Holiness’ own recounting of numerous tales, and by his exchanges with his long-time English translator, Chak Ngodup Tsering, whom the Gyalwang
Karmapa at one point characterized as ‘naughty.’

In keeping with the spirit of inclusiveness and harmony that His Holiness both encourages and embodies, the thanking mandala was offered at the conclusion of the teachings by four representatives of diverse Buddhist traditions: a great Korean Buddhist master, the abbot of the great Nyingma monastery Mindroling, a learned Kagyu khenpo and a lharam geshe from the Gelugpa tradition.

Yet even after the thanking mandala, His Holiness kept offering Dharma, as well as his own thanks to the audience. When it comes to receiving Dharma as well as to benefiting sentient beings, he said, we should not be like rich people who insist on nothing less than the latest model and most expensive goods. (The Gyalwang Karmapa noted that the Dharma equivalent is to take interest only in such elevated practices of Mahamudra or Dzogchen.) Rather, we should be like penniless beggars, who welcome with great gratitude and joy any Dharma they receive. Similarly, we can feel that we have waited many lives to have the opportunity to benefit other beings, even in small ways. In this way, we will embrace with tremendous joy and enthusiasm each and every chance we find to work for the happiness of our mother sentient beings.

In concluding, the Gyalwang Karmapa expressed his own gratitude for the opportunity to share the experience of the Dharma teachings with the audience, both at Gyuto and those listening online via Internet. During these few days, we have deepened our connection to one another, shared our joys and sorrows, and come closer in the process, he said. His Holiness then made the aspiration that this small gathering be only the beginning, and that from this beginning we extend outwards to be able to share the joys and sorrows with all beings of the world. If this should happen, his wishes will be fulfilled, His Holiness said.

One final moment of stillness fell over the hall—and surely too in the homes and Dharma centers around the world wherever the webcast reached—as those listening absorbed the sheer beauty of this closing aspiration of the Gyalwang Karmapa. With that, the cameras were turned off and people slowly headed home, like joyful beggars who had just been offered more riches than they could conceivably carry.

The Autumn Teaching Series will be made available in the future for viewing at http://www.karmapa-teachings.org/ 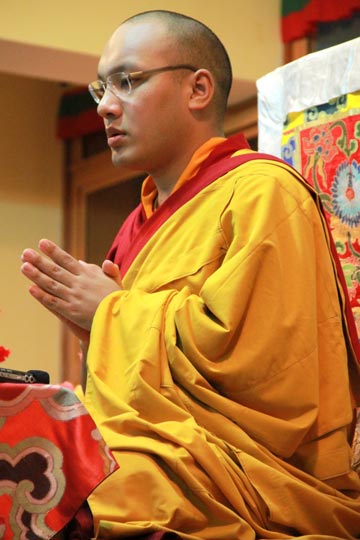