Direct Instructions on the Great Compassionate One, Day Two 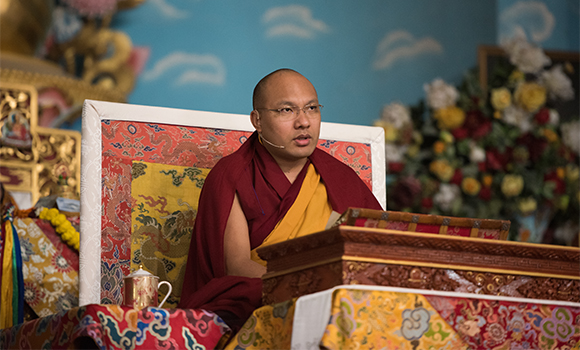 January 18, 2017 – Tergar Monastery, Bodh Gaya, Bihar, India
Today the Gyalwang Karmapa continued his talks on the practice of Avalokiteshvara, moving on to discuss the main mediation practice of creation and completion. He began by reading the text, which describes coming to enlightenment in various ways: through emptiness, through the seat of sun and moon, through the syllable for speech, through the emblem for the mind, and through the perfection of the body.

First we find a suitable, quiet place, create a comfortable seat, and sit down in equipoise with our legs crossed. The Karmapa commented that in the creation phase of the four tantras, one meditates on the deity and here it is Avalokiteshvara. There are many ways to create the visualization—the three stages of the ritual, the three vajra points of meditation on the body and so forth—here, it is the sequence of five stages of enlightenment. While aware of our ordinary body, we look into our chest and see our heart as empty. This represents the first of the five stages, enlightenment through emptiness. However, this is not just thinking that our heart is empty; we should recall suchness, the nature of all things as well.

In the middle of this empty heart of suchness, a lotus on a stem arises from the syllable PAM, and on top of it, a full moon disk arises from the syllable AH. This seat is the second of the five stages, enlightenment through the seat. The lotus represents the wish for enlightenment and the moon, relative bodhichitta. For the practice to be effective, we should recall the significance of the lotus and moon, or recollect the purity. If we just visualize a lotus and moon, it is not that beneficial for our minds.
In the middle of the lotus and moon is the white syllable HRIH, which symbolizes the life force and mind of Avalokiteshvara. This stage is the third, enlightenment through the syllable or speech or through the seed. The white HRIH radiates multi-colored lights in all directions, and they purify every misdeed and obscuration accumulated in our lives from time immemorial. The light fills our body (or our five skandhas) and it transforms into a white lotus on a stem. This represents the fourth stage, enlightenment through the mind, the emblem.

The lotus and stem then completely transform into Avalokiteshvara with one face and four arms. The main two arms are joined together in prayer at his heart; the lower right usually holds a white crystal mala, and the lower left, a white lotus. He is adorned with a variety of ornaments and wears upper and lower garments made of silk. He sits in the vajra posture on the lotus and moon disk. His color is white, not a dull but a brilliant and radiant white like a snow mountain struck by rays of the sun. Avalokiteshvara is smiling and his eyes are filled with compassion. The Karmapa commented that like peaceful deities, his eyes are long and shaped like a bow; they are neither wide open nor closed, but half open and emanating great compassion. (The eyes of fierce deities are wide open, bulging and round.)

One could go into the many details of Avalokiteshvara’s appearance, the crown and upper arm ornaments, and so forth, but actually painters drawing images of the deity need these, but they are not so useful for meditators. What is important is to know what they tell us about Avalokiteshvara and, recalling who he is, experiencing the feeling we have for him. For example, if we call to mind someone we love, their image will appear in our mind along with our feeling for them. We do not think too much about the details, what clothes they are wearing, the pattern on their shirt, and so forth. If our mind gets entangled in these small things, that will impede the experience of the feeling, and this is the most important thing—feeling very close to Avalokiteshvara.

Up to now, we have visualized a white lotus flower, which transforms into Avalokiteshvara who is the size of our own body. His three places are marked with OM AH HUNG, and in his heart is the wisdom being, an inch in height, in whose heart is a white letter HRIH with visargah (two stacked spheres following it). The HRIH radiates lights, which strike the whole universe, turning it into a pure celestial palace and it also touches all its inhabitants, so that their bodies turn into numerous Avalokiteshvaras. This is the fifth branch, enlightenment through perfection of the body.

Lama Nyan (Tsembupa) explained that the purpose of purifying the world (vessel) into a celestial palace and its inhabitants (contents) into Avalokitsehvara is to train our mind in pure vision or pure perception. This will not actually happen now, but purifying the world by seeing it as a palace creates the connection to be born in an utterly pure land in the future. Purifying by perceiving whomever we are with, wherever we are as a yidam deity creates the connection for them to become our disciples in the future.

The white letter HRIH in the wisdom being’s heart radiates effulgent lights to the Potala Mountain (the pure land of Avalokiteshvara) and invites him primarily and also all the buddhas and bodhisattvas of the ten directions. They all come and dissolve into the samaya being, and the samaya being and the wisdom beings become inseparable.

Lama Nyan commented here that the purpose of this visualization is that by meditating on one deity, all deities are accomplished. It is important to realize one deity as all of them, he said, because if we do not, then in one session we would practice Avalokiteshvara and his mantra, and then in another, Hayagriva and his mantra. Practicing like this we would not have enough time to meditate on all the deities. Further, Lama Nyan explains, this type of practice would not become clear or profound; we would also be picking and choosing among the yidam deities, so the realization that makes one a true master would not arise. Therefore, we meditate on one yidam deity and invite all of them to dissolve into this one; for example, we see ourselves as Avalokiteshvara and meditate upon him not just as a single deity, but as embodying all the buddhas and bodhisattvas. This is said to be a core instruction that can make all our virtues vast and continuous.

The Karmapa then read the concluding section of the creation phase, which contains the above teaching of the wisdom beings dissolving into the samaya beings. Then the lights shine and invite the buddhas of the five families, who bestow the four empowerments with nectar from the vases they hold in their hands; the excess liquid overflows, turning into Amitabha as your crown ornament. Light radiates out again and turns all beings into Avalokiteshvara, who recite the six-syllable mantra. Meditate that the yidam deity is emptiness without any reference point and dedicate the virtue to enlightenment.

Specific to Tsembupa’s tradition is the teaching that the buddhas of the five families represent the outer aspect or form, and their inner essence is one’s own lama. Usually the five buddhas are invited from the pure land of Akanishtha, but here in Tsembupa’s tradition (and in particular in the instruction manual from the 5th Shamar Rinpoche), if the lama is alive, we imagine them coming from wherever our guru might be; if they have passed away, they come from the pure realm of Akanishtha. In sum, in receiving these empowerments, the five buddhas represent the form of the deity and the essential nature is the lama. Similarly, after the five bestow the empowerment and Amitabha appears as the crown ornament, he, too, is in essence your lama.

Here Lama Nyan Tsembupa comments that one practitioner can have connections with many different lamas and, to put it colloquially, some of them are our favorites and for others, we do not have as much devotion. We can imagine the central lama to be the one for whom we feel the most devotion, and then imagine that those who feel the farthest away, dissolve into the ones who feel closer, and finally these dissolve into the main lama, who then embodies them all.

It is important to meditate on all one’s lamas as inseparable, thinking that all the other lamas are the same in essence as our favorite one. If we do not do this, then we are picking and choosing among our teachers and will not be able to develop pure perception and realization. This accepting and rejecting makes for negative connections, and if we have a mistaken connection of faith and samaya with one lama, it will affect our ability to make a connection with other lamas. It is important to have faith and pure perception for all lamas. Being human, however, we will have preferences, so we place our favorite lama in the center but do not think of this lama as a single entity; rather, we know this lama to be the embodiment of all the lamas with whom we have a connection. They are in essence the same and the main lama contains all the others. This is the way we can have faith and devotion to them all.

The Karmapa then turned to the mantra recitation. We visualize that from the HRIH in the heart of the wisdom being within us, lights radiate and strike all living beings, turning them into Avalokitsehvara. In some manuals, it is said that the HRIH is surrounded by the MANI mantra, and though this is not in the 8th Karmapa’s commentary, it is all right to visualize like this. The power of our reciting the mantra inspires the Amitabha on our crown, the embodiment of all the lamas, to say the mantra. All living beings who have been transformed into Avalokiteshvara recite the mantra as well. Some manuals say that we can imagine, though it is not easy, that all the microorganisms within our body transform into Avalokiteshvara and recite the mantra. If we can visualize like this (a stable clear visualization helps), the mantra recitation becomes uncountable. Lama Nyan explained that this is the purpose of visualizing ourselves, the guru in the form of Amitabha, and numberless sentient beings reciting the mantra.

Next comes the completion phase and the Karmapa commented that in other manuals, after the dissolution phase, the practice of the channels and winds is mentioned; here, however, Mikyö Dorje explains completion in terms of practicing mahamudra (the Great Seal). Usually the texts speak of three kinds of mahamudra: sutra mahamudra, tantra mahamudra, and essential mahamudra. For our discussion, the first two suffice, and in Mikyö Dorje’s text, sutra mahamudra is emphasized. One could say that most of the mahamudra manuals teach sutra tradition mahamudra; the essential nature of the practice is the perfections and the practices are compatible with the tantra tradition.

The Karmapa will continue teaching the completion phase tomorrow.[Best_Wordpress_Gallery id=”30″ gal_title=”Direct Instructions on the Great Compassionate One, Day Two”]