The Three Essential Points, Day Two, Part I: The Accumulation of Merit 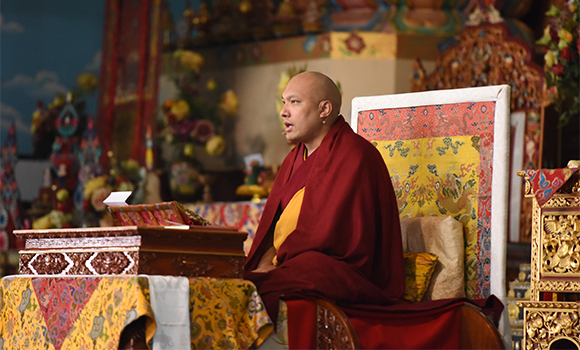 January 21, 2107 – Tergar Monastery, Bodh Gaya, Bihar, India
Yesterday, the Karmapa covered the first two of the three points, and today he discussed the third, the essential point of the Bardo. The root verse states:

Recognize that this is the bardo.
Transform the outer, inner, and secret
And do the yoga of emptiness and compassion.
The wise thus take rebirth.

Commenting on the first line, the Karmapa said it referred to seeing all the appearances of this life, all that arises as the objects of our senses, as the delusive appearances of the bardo. We need to recognize this bardo as actually being the bardo. If we can meditate like this in a stable way, when we are born into the bardo, we will have the feeling, “Oh, I’ve been born in the bardo,” and be able to recognize its appearances for what they are.

In order to do this, the Karmapa explained, it is important to be able to recognize that we are dreaming when we dream. To develop this ability, from sunrise onward, we can maintain alertness and the mindfulness of all daytime appearances as dream-like. Secondly, as we go to sleep, we can pray to our special yidam deity and our lama to grant their blessing that we enter into lucid dreaming and that we will be able to change the dream appearances as well. Through praying, we create an impetus that will carry us through to our goal.

Then we visualize ourselves as Khasarpani, following the description from yesterday, and in our throat at the middle of a red four-petaled lotus is a red OM (or a red AH). Holding our mind on this or gazing on it steadily as we fall asleep will help to recognize that we are dreaming.

The second line of the root verse states, “Transform the outer, inner, and secret.” The Karmapa clarified that after recognizing that we are dreaming, we see all appearances of objects not as ordinary but transformed into pure appearances. Here “outer” refers to the vessel of the world; “inner” to its contents, living beings; and “secret” to meditating on the nature of mind—seeing that all impure appearances come forth while having no true nature. In brief we come to recognize that we are dreaming and then become able to transform its appearances. The external world turns into a pure land; the inner living beings become yidam deities; and in the secret transformation, all the impure appearances of the outer and inner arise yet have no inherent nature.
If we can do this, we will be able to transform the bardo appearances as well.

For the time of death, the Karmapa advised, we should make the powerful aspiration that we will be able to create these three types of transformation (outer, inner, and secret) and then take rebirth as we wish. It is only after recognizing our dreams that we engage in the actual practice of the bardo recognizing, as in the dream practice, that these appearances to our mind are the delusive appearances of the bardo. Likewise, we also make a firm resolve to recognize bardo appearances, and this will create a positive dynamic for it to actually happen.

The final two lines of the root verse read: “And do the yoga of emptiness and compassion. / The wise thus take rebirth.” The antidote for taking an uncertain rebirth is to take rebirth with knowledge or skill. If we wish to be reborn in a pure land, we should do the practice of transference as described yesterday as the practice for the time of death. On the other hand, if we would like to take rebirth in this world as a human, we need to search for our parents. Usually when a bardo being is search for parents, they feel attraction for the father and aversion to the mother, or visa versa, and this is what causes us to be conceived in a new existence. Actually, seeing them as ordinary way is the condition for the arising of aversion and hared.

But here, the Karmapa explained, instead of being moved by attachment or aversion, we should rest in an equipoise they cannot affect or disturb. To counter attachment, we see that the object we cling to is not established by nature; to counter aversion, we feel compassion for those we dislike and pray they will be freed of suffering and know happiness. In sum we block attachment and aversion, meditate on Avalokiteshvara, see our parents as Avalokiteshvara in union with his consort, and intentionally take rebirth. By practicing the yoga of emptiness and compassion, instead of taking an ordinary rebirth through aversion and attachment, we see that all ordinary appearances are not established by nature. With this the Karmapa concluded the Karmapa his talk on the bardo.

This topic was followed by the root verse on view, meditation, and action:

Looking at the first line, the Karmapa commented that all the phenomena that are appearing to us are ultimately not established or, one could say, not established as they appear to us. Recognizing this and gaining certainty about it is the key point of the view. The key point of meditation is resting without distraction on the meaning we have comprehended. The key point of conduct is recollecting that all possible appearances, all of samsara and nirvana, are the same in flavor—appearance-emptiness inseparable—and benefitting living beings as bodhisattvas do.

The last line, “This is the great siddhas’ advice,” states that these are the key instructions of the great Mitra Yogi himself. The Karmapa explained here that the first verse of the root text, the brief overview, was from Mitra Yogi and the others were the detailed explanation of this verse provided by Tropu Lotsawa.

The Karmapa concluded the section on practice by reading the summarizing paragraph:

There is no fault for anyone at all—whether monastic or lay, whether they uphold the precepts of the three vows or not—to practice this liturgy, which has been praised as having tremendous benefits. These instructions given by Mitra Yogi to Trolo that are presented here, are pith instructions in gathering merit, which has been called the greatest method for achieving the form kayas of a buddha.