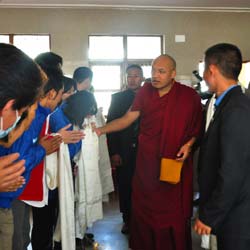 As usual, the medical facility this year is set up at the Nyingma Monastery, the residence for many of the monks and also a site that is accessible to the local population. Halfway across a broad courtyard, surrounded in all sides by double stories of residential rooms, are two rooms with a long veranda outside. It is here that people wait to see the Tibetan doctor, the dentist, or the doctors trained in Western medicine.

In the first room, two Tibetan doctors work in a room that is partitioned off by white sheets from the rest of the room. Outside this consultation area, filling the shelves along the walls are bulging indigo bags with Tibetan written on white labels. Some have their drawstrings closed and some open, showing the dark brown pellets, known as “rilbu” (“the round ones”, the name for pills) that come in a variety of sizes. Three assistants, one nun and two lay people, count out the prescriptions and these are given away free as are all the other medicines and treatments in the clinics.

Behind this partitioned space is the dental clinic. A small, low bed serves as a dental chair and next to it on a folding chair is a gleaming silver suitcase, one by one by two feet, that contains the dental machine. A young Tibetan is having his teeth cleaned by a monk from Rumtek Monastery, who recently started to study with the dentist Hannah and has learned very quickly. After the Monlam, he will take the machine back to Rumtek to provide basic services there. Hannah is talking through a translator to a young woman who has an impacted wisdom tooth and advising her about surgery.

In the room next door is the clinic for Western medicine with three doctors and about thirteen assistants. Some serve as translators, some hand out medicine, and some help to organize the patients. There is a long table on the veranda for people to sign in and a row of red plastic chairs for those waiting.

The distant sound of a siren announces the coming of the Karmapa, and soon his entourage, kicking up some dust, pulls into the wide open space of the quadrangle. He heads first for the dental clinic and examines the machine and the setup as well as the medicine lined up along the wall. As he is leaving, he receives a new toothbrush. Next the Karmapa ducks behind the white walls of the Tibetan doctor’s room and, after warmly greeting him, examines his record book as well as a small tablet for prescriptions. Swiftly, he then moves next door to the clinic for Western medicine, where the three doctors and thirteen assistants in bright blue jackets wait to greet him. Accepting their white scarves, the Karmapa stops to speak to the doctors and some of the volunteers. He picks up one of the boxes of medicine from those stacked along the wall with notes above them describing what they generally treat (pain, diabetes, lungs, etc) or what kind of medicine they are. After he thanks everyone, he walks out into the courtyard where a large yellow umbrella is waiting to shield him as he walks around the corner to see the kitchen.

This year, the kitchen is set up under a high roof to give spacious shelter from the elements. Huge pots, some four or five feet across, sit over their fires. His Holiness lifts a couple of the wide flat lids to see what is underneath. A special pot for heating tea water is five feet tall and four feet in diameter with a bright log fire burning underneath. The Karmapa calls the cook to his side and they walk together to the bamboo rows set up to manage the crowds as they come into the serving table. His Holiness enters one of the aisles and goes up to the table to see what was in the pots. One has the feeling that he does not want to miss anything, that his curiosity extends to the smallest detail.

The cook accompanies him to the far entrance of the courtyard where the cars are waiting, and then suddenly His Holiness disappears up the stairs to the second floor of the building near the gate. On the veranda, a desk chair and the long rectangle of a table have been covered with beautiful brocade. Set out for him is the rice, dahl, and string beans plus carrots that will be served to everyone today. The Karmapa checks with the cook making sure that there is no garlic or onions in the food as they are prohibited for those taking the sojong vows. He tastes everything and comments, “It’s delicious. You’ve done well.” Drinking tea from the traditional covered wooden bowl, he stands to look out over the courtyard and talks with Lama Chodrak about the food at the Mahayana Hotel where many members of the Kagyu Monlam have their lunch. People have made donations and wear cards that allow them in. Lama Chodrak mentions that the food is said to be good and His Holiness replies that he will soon come to the hotel to see how it is.

The Karmapa then descends the stairs with a flurry of security around him and returns to Tergar Monastery to join the fully ordained monks (gelong) and nuns (gelongma) who eat in the shrine hall there.

GYALWANG KARMAPA LUNCHES WITH THE SANGHA

After the two morning sessions, buses are provided to take all the Bhikshunis and Bhikshus to Tergar Shrine Room for a silent lunch. Today when going towards the Shrine Room the sound of sirens could be heard approaching the monastery, an indication His Holiness Karmapa may have found time in his busy schedule to join the Sangha for lunch, his first time for this Kagyu Monlam.

His Holiness entered through the side door and walked around the Shrine Room inspecting the neatly lined rows of bowls filled with food which young monks, nuns and lay volunteers had prepared beforehand. His Holiness did one circumambulation around the Shrine room walking briskly behind one of the security guards who seemed to have problems keeping up with Karmapa’s quick and lively pace. Then His Holiness sat on his beautifully carved wooden chair and watched as the volunteers pour hot water in the plastic bowls for the Bhikshunis and Bhikshus.

His Holiness, having just come from a visit to the Medical Camp, did not have his chogu with him. It was brought to him by an attendant. His Holiness draped the folded chogu [yellow prayer outer robe] over his left shoulder as he waited for the remaining Bhikshus to enter the Shrine Room , don their chogu, and be seated on their dingwa [a special rectangular maroon cloth carried by Sangha to sit or lie on].

From a distance, in the dim light His Holiness could be seen in his trademark stance of shifting from one foot to another , while he was waiting for people to enter. Finally, everyone had poured in and sat down.

The umze began to chant the offering prayers. His Holiness went to the front door and watched as the Sangha prayed. Then he spoke with some of the volunteers as the Sangha were handed their bowls so they could begin their meal. Before eating everyone took some of the food, such as the rice, and made what is called a chambu [traditional Tibetan food offering to the hungry ghosts].

This tradition was prescribed by the Buddha Sakyamuni himself because at the time when the Buddha walked on this earth there was a hungry spirit who had no food and so she would eat her children. The Buddha told her not to do that and ordered the Sangha to offer food to the hungry spirits at every meal. The chambu is left on the plate until the end of the meal when prayers are said to accompany the offering to the hungry spirits.

His Holiness paced back and forth and watched as the Sangha silently partook of their meal. Volunteers went back and forth offering seconds to those who wanted more. On the very first day the umze [chantmaster] had told everyone to be sure to eat enough as the next meal would only occur the following morning.

At noontime at the sound of the wooden blocks everyone put down their bowls and the prayer for offering food to the hungry ghosts was recited as volunteers came by and picked up the chambu.

His Holiness standing near the volunteers, motioned to them with his hands in prayer posture, thanking them for their kindness in preparing and serving the meal.

After the chambu offering prayer we recited the Heart Sutra with the umze whose voice resonated over the intercom. As everyone got up, removed their chogus and began to exit, His Holiness sat down to have his lunch. Then everyone boarded the buses which took them back to the stupa for the afternoon session of the monlam.