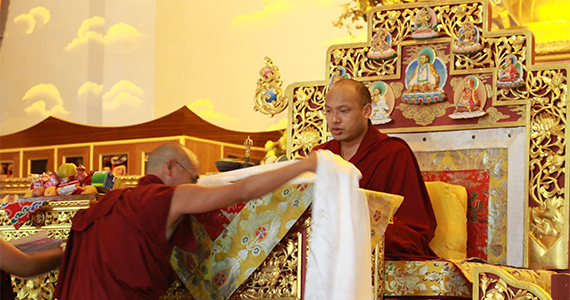 The sound of gyaling horns echoed down the stairwells from the roof of Tergar monastery, heralding the Gyalwang Karmapa’s arrival as he descended into the gompa below to lead the final session of the three-day puja. He joined around 300 monks as well as a small crowd of international devotees in the birthday long-life aspirations.

Yongey Mingyur Rinpoche, abbot of Tergar Monastery and one of the highly respected lamas, entered an advanced meditation retreat two and a half years ago. After leaving behind a letter to his students around the world setting out his intentions, he disappeared alone into the Himalayas to follow the path of a solitary wandering yogi. He carried no provisions, and no fixed plans, as he set off to meditate alone in remote Himalayan caves and at sacred sites.