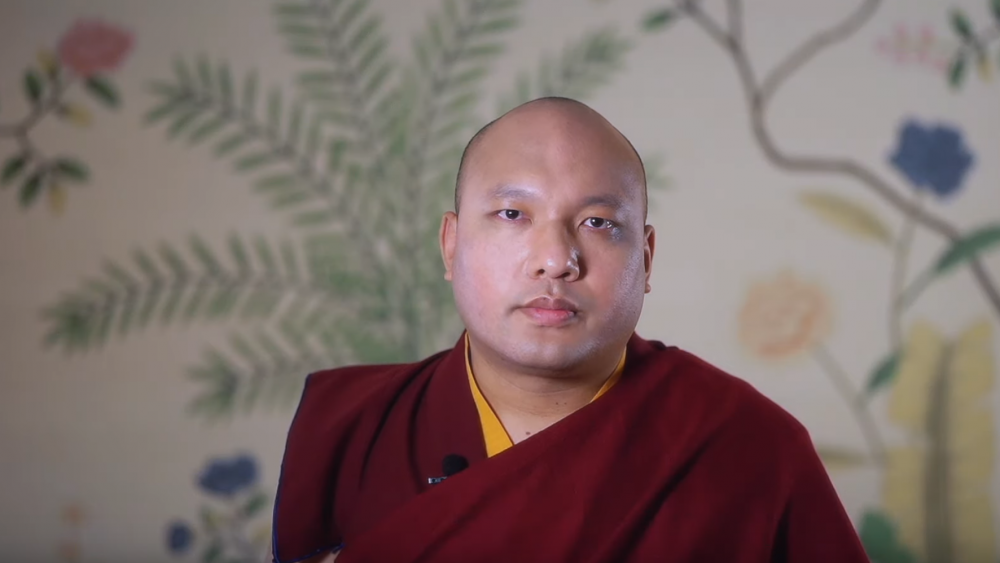 I hope all of you are doing well. Today is the seventh day of the Aspirations to End Adversity. Today we will recite the Manjushri Nama Samgiti together.

In China, Avalokiteshvara, Manjushri, Samantabhadra, and Kshitigarbha are considered the four foremost bodhisattvas, and each has his own well-known sacred site. Avalokiteshvara is associated with Putuo Shan, Manjushri with Wutai Shan, Samantabhadra with Emei Shan, and Kshitigarbha with Jiuhua Shan. These four mountains are recognized as the sacred Buddhist sites in China.

There are several different accounts of Manjushri’s origin. According to the Sutra of Manjushri’s Nirvana, which was translated into Chinese in the third century by the Western Qin lay practitioner Nie Daozhen, Manjushri was born into a Brahmin family in Shravasti. He could speak as soon as he was born. When he grew up and completed his education, he became so learned that no one could rival him. Later he came into the presence of the Buddha, went forth, and became a monk. Through the strength of his heroic-stride samadhi, he was able to send emanations in all directions. It was prophesied that he would awaken to buddhahood four hundred and fifty years after the Buddha passed into nirvana, the sutra tells. This is a sutra that describes Manjushri as a human being.

Many other sources say that he awakened to buddhahood innumerable aeons ago. The Sutra of the Features of Manjushri’s Realm, which is the fifteenth section of the Ratnakuta Sutra, teaches that in the future, Noble Manjushri will waken as the Tathagata Samanta Darshana in the southern realm Viraja Sanchita. Similarly, the White Lotus of Compassion Sutra describes that he will waken to buddhahood in Viraja Sanchita. But the twelfth chapter of the Avatamsaka Sutra states that Manjushri is in the world called Kanakavarma to the east, and the Avatamsaka Sutra also explicitly says that Manjushri dwells at Wutai Shan in China.

Today we are reciting the Manjushri Nama Samgiti, and you might wonder what its importance is. It is extremely important, especially in terms of the secret mantra. The reason is that it encapsulates all the key points of the path of secret mantra. For example, the great commentary on the Kalachakra Stainless Light says that there is no way of knowing the path of tantra without knowing the Nama Samgiti and that Kalachakra must be known through it. It is explained in many ways in the Indian commentaries found in the Tengyur. Some explain it as yoga tantra, some as unexcelled tantra, some as the Kalachakra tantra, and some as a dzogchen text. There is a story passed down from the lamas of the past that when Chandrakirti met Chandragomi, Chandrakirti asked him what he knew. Chandragomi replied, “I know the Panini grammar, the Praise in One Hundred and Fifty Verses, and the Manjushri Nama Samgiti. I don’t know anything else.” It is said that Chandrakirti then understood that Chandragomi was saying he knew grammar and both sutra and tantra. Thus it seems that this means that only when one knows the Manjushri Nama Samgiti does one enter the ranks of those who know tantra.

The Manjushri Nama Samgiti is listed in old catalogs from the time of the dharma kings, and there are several different copies among the Tibetan manuscripts found in Dunhuang. The colophon of Pang Lotsawa’s translation explains how it had been translated by earlier translators and became well-known. There is also a handwritten Kangyur that was copied in Druptop Orgyenpa’s Pukdrak Monastery. The colophon of the Manjushri Nama Samgiti in it mentions several different translations, saying, “There is also a translation of this by Lotsawa Chimey Bumpa and Üpa Garge. There is also a translation by Mang Kharwa.” However, usually when there are multiple translations of a single text, the various editions of the Kangyur and Tengyur chose only one, for otherwise it would have been too much to print. Because of this, many of the translations are no longer extant, which is a great loss for us. Thus, in this electronic era, if we could search for, gather, and compile as many different translations as we can, it would be of great benefit to do some research and analysis.

With regard to this king of all tantras, commentary on all scriptures, quintessence of all pith instructions, source of all teachings, and pinnacle of all vehicles, Reciting and Praising the Names of Noble Manjushri…

Similarly, all Tibetan scholars and practitioners hold the Manjushri Nama Samgiti in high esteem. When the Tibetan Kangyur was compiled, it was placed in the first volume of tantra. It is said that Lotsawa Rinchen Sangpo recited it 100,000 times in Sanskrit and 100,000 in Tibetan and sponsored 100,000 repetitions by others. Lord Tsongkhapa also is said to have recited it three times daily before dawn, never missing a day. There is no Tibetan tradition—Sakya, Geluk, Kagyu, Nyingma, and so forth—that does not have its own commentary on the Manjushri Nama Samgiti. The earliest Tibetan commentaries were probably written, I believe, by the eleventh-century masters Rongsom Chösang and Ngok Shedang Dorje. There is also a commentary written by the translator Pang Lotsawa himself.

The main point is that Manjushri is the deity who represents the prajna and wisdom of the buddhas. The Buddha himself celebrated and welcomed those who entered his teachings not just out of faith and longing but through investigation with profound prajna. He said that such prajna is not just present from birth or gained through study; prajna can also be gained by the power of blessings from others.

So now please join me in reciting with wholehearted faith and devotion the Manjushri Nama Samgiti with the aspiration to swiftly develop profound and vast prajna in your being.