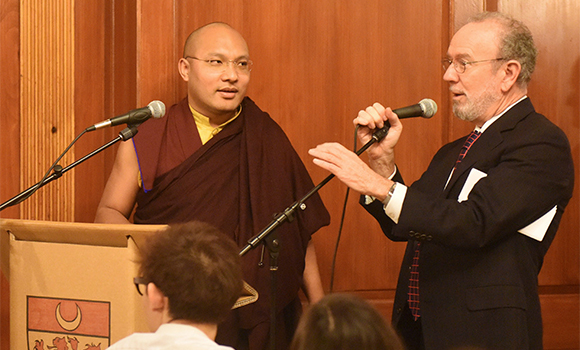 Most often conferred upon political and social leaders, the Chubb Fellowship was awarded to His Holiness in recognition of his role as a global leader on environmental issues. During his Chubb address, His Holiness the Karmapa spoke of the role that religious leaders can play in prompting the changes in attitude and behavior that are needed to bring about change in our environmental practices.

In line with the aim of instilling greater interest in serving society in its students, Chubb Fellows are required to engage in three activities: deliver a campus-wide Chubb lecture, attend a reception in their honor and share a dinner with students at Timothy Dwight College, which administers the fellowship. Timothy Dwight College is one of Yale’s twelve residential colleges. When possible, Chubb fellows are invited for longer stays on campus and are encouraged to interact closely with students, an aim that His Holiness the Karmapa has often described as his own wish for this two-month university tour.

His Holiness the Karmapa fulfilled two of the Chubb commitments on April 7, delivering the Chubb lecture in the afternoon and attending the reception in the evening. An audience of 2,500 packed Woolsey Hall to hear his lecture. Joining for the reception were deans from across the university, heads of the university’s various residential colleges and key faculty from many departments.

The final of the three Chubb-related events at Yale was a dinner with students in the dining hall of the Timothy Dwight College. When His Holiness the Karmapa learned that he was expected to sit at the head table with senior faculty and administrators, while students dined separately at their own tables, he proposed to overturn that order. Instead, the Karmapa sat with students, moving from table to table as each new course of food was served.

Although the young students peppered him with questions for much of the meal, His Holiness the Karmapa also took the opportunity to ask penetrating questions of his own. He has frequently stated on this trip that he wished to learn more about the experiences of today’s young people and gain a closer glimpse of their lives as students. During the Chubb dinner he asked them what strategies they used to deal with the stress of attending an Ivy League school like Yale. He also asked them what impact the competitive academic climate had on their relationships with their classmates, and then listened attentively to their answers.

At the conclusion of the meal, Timothy Dwight College Master Jeff Brenzel asked the Karmapa to speak about his own experiences and offer advice to the students. His Holiness spoke movingly of the pain of being taken away from his parents at the age of seven, and described his own process of coming to terms with his role as Karmapa. He described how formative it had been for him to see that his own parents, though equally pained at having to part from their son, did so willingly in the confidence that his future as the Karmapa would be of great benefit to the world.

“Seeing how my parents dealt with it gave me courage,” His Holiness the Karmapa said. “It helped me understand that if we see that it will be of real benefit to others, we are capable of sacrificing our own comfort.”

He emphasized that this is not a matter of having special qualities or powers. “Deep down, we are all the same,” he said. “We are all fundamentally capable, deep down, of serving others.”

He spoke of his own growing awareness that being told he was the Karmapa allowed him to recognize the great responsibility he had toward others and also gave him a wonderful opportunity to serve others. Although he never drew the explicit connection to the privileged position enjoyed by Yale students, as he described his own unusual life circumstances, the 17th Karmapa gently made the point that not only do those with greater opportunities bear a greater responsibility to serve, but in fact life becomes truly meaningful when it is used to benefit others.