What is True Compassion? The Gyalwang Karmapa Talks to TCV Foster Mothers 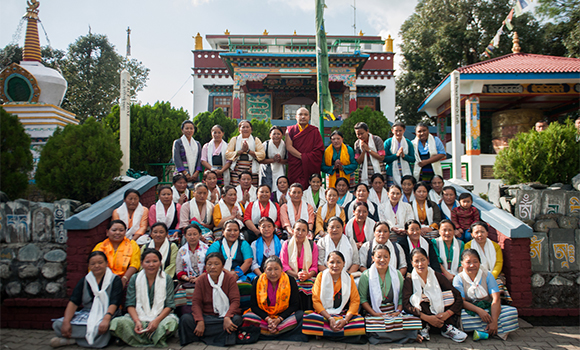 October 10, 2016 – Upper TCV, Dharamshala, India
This afternoon in a more informal setting, the Gyalwang Karmapa met with the foster mothers of TCV Upper Dharamsala. They responsible for the daily care of the students, who live homes of about thirty students each with one foster mother to each home. The Karmapa began his talk with something he said they all would know.

“What people become depends on the social environment of their childhood and especially on the close relationship they have as children with the people who care for them. Whatever habitual patterns are created in their young years and the counseling they receive are probably the most important thing for shaping their thought for the rest of their lives. Therefore, those who act as mothers are essential.

“As humans we usually have a mother and father, but we Tibetans experience the sad situation in which parents and children are separated. Previously, for the sake of their future and to preserve Tibetan culture and Dharma, many parents let go of their children. Not deterred by hardships, many arrived here in India from Tibet. Through the leadership of His Holiness the Dalai Lama, the Tibetan Children Villages were created.”

The Karmapa then spoke of the goals of the school, which were to use both traditional and modern education to create good people, who were also dignified and well mannered. To bring this about, of course, education is important, but equally important are the foster mothers. They hold a great responsibility, because their way of being and working sets an example for the children.

“Usually, we have a difficult time saying that we will take on a big responsibility,” he said. “If you ask some one if they are prepared, or if they have the courage and time to assume a great responsibility, it will be difficult for them to say, “Yes.” But even if we do not have this capability when we are born, it is possible to develop it through gathering experience so that the scope of our mind increases.

“To use myself as an example, I was recognized as the Karmapa when I was seven years old. At that time, I did not understand who the Karmapa was or what to do after becoming him. In our homeland, people usually had great faith in the Karmapa, which was authentic. In general Tibetans have immense faith in lamas and sometimes think of them as beyond human as if they did not even need to eat.”

He continued, “On the day when they recognized me as the Karmapa, I thought, “I’ll get to play a lot and have many friends to play with. It didn’t occur to me that there would be tremendous problems and difficulties.”

“I left my homeland and came up to Lhasa, and then I traveled to Tsurphu, the seat of the successive Karmapas, about 77 kilometers from Lhasa. Before arriving at the monastery, following tradition, I left the car and mounted a horse. The Sangha lined up along the road and there was a traditional parade with banners and drums resounding. There were crowds of people, and I was riding a horse. It all seemed rather strange and, I thought, ‘This is not going to be a lot of fun,’ because I had never heard such loud drums and the people riding horses were closing in. ‘This is not going to go well,’ I thought. I had that kind of feeling in the beginning, and then gradually, I began to study.”

Turning to the topic of reincarnate lamas in general, the Karmapa remarked, “On the one hand, from their previous lives many reincarnate lamas inherently had special qualities and traits from the time they are born. On the other hand, many lamas, to put it plainly, are given studies and made ready for their role. And they are instructed that they have to become incredibly good.”

In terms of his own studies, the Karmapa noted that as many people who are rather intelligent, his discipline could have been better. Be that as it may, he continued studying as he grew up.

Segueing into speaking of a precious human rebirth with resources and leisures, the Karmapa described it is a special human birth, in which we have all the positive conditions needed to benefit others and are free of the opposing ones. “Since we have attained this kind of human rebirth that is useful and beneficial, we must make it meaningful,” he said and commented that this means being able to actively benefit others and ourselves as well.

Returning to the topic of responsibility, the Karmapa mentioned, “Taking on the responsibility of helping others is not at all easy. If we do not have the right capacity for a practice that is supported by love and compassion,” he cautioned, “pleasant words may come from our mouth, but when we are engaged in actual practice, it will be difficult for us. Why is this so? Because the thought to benefit others is not the only one in our minds. We have a whole variety of thoughts and emotions within us. Sometimes we do not know what we should do, so we make many mistakes.

“Recognizing this, we give our power over to what we really need—love and compassion. To them we transfer our control and its authority. If we can do this, then gradually things will go well. Without this, it will not be easy at all.”

He continued, “A large percentage of children who have malaria die. Another executioner in our world could be called our lack of compassion for each other.” The consequence “is that many people die of hunger. Some are all alone without friends, and others live in a situation where they have no refuge or protector. If we humans were concerned about each other and felt mutual sympathy and compassion, we would see less suffering in the world would decrease.”

“We have this capacity for concern and affection from the beginning of our lives,” the Karmapa noted, “however, as we grow up our way of thinking is influenced by our surroundings and the situations we meet, so that slowly we change and become someone without much compassion. Therefore from a very young age, we should make efforts to train this innate capacity for compassion.”

If it is not developed, then there’s a danger of it diminishing or even getting lost, like a child who does not develop its capacity for language if left alone. The Karmapa also gave the example of a retreatant: “Some people stay in silent retreat for a long time with no one around, and when they return to human society, they have a difficult time talking.” So we should nurture a child’s capacity for compassion, he counseled, by often using the words “love” and “compassion” in the course of daily life. “If compassion is developed from a young age, when it comes time to take responsibility, this will not feel like a heavy burden or a hindrance and they will become courageous.

“If we did not have the capacity for love and compassion, and had to take on the great responsibility of benefitting others, it would feel like a heavy load. Other’s problems would seem unbearable and it would be difficult to try and help them. Courage is necessary in order to help others.

“Further, many conditions must to come together,” he continued. “It is not enough to merely have a positive attitude. There are the six perfections, for example, including discipline and patience, which should be developed. Many different conditions must assemble so that afterwards we can truly benefit others.” The Karmapa concluded, “Just a good attitude by itself will not help if it does not actually benefit someone in the way it was intended.”

On a more general level, the Karmapa noted, “For us Buddhists, especially those on the mahayana path, compassion is the root of practice. It is important in the beginning of practice; important while one is continuing to practice; and important at the end when the level of the Buddha is realized. Therefore, it is crucial to develop our practice of compassion.”

Continuing to discuss compassion, the Karmapa stated, “There is a difference between compassion as it is explained in the great texts of Buddhism and compassion as we usually understand it as being affectionate and caring. For example, if we were walking along a road and saw a dog that had been hit by a car and its legs were broken, we would feel compassion for it. This is, of course, compassion but the compassion that is explained in the texts is more active and more dedicated: it involves a greater sacrifice. This is a key point.

After speaking about the future of the Tibetans, the Karmapa concluded his talk with a counsel to the foster mothers: “In the future we should continually sustain our determination and enthusiasm. It is essential to remind and encourage ourselves.”

Following his talk, the Karmapa visited the Juniors’ classes to observe how the teachers conduct their studies and how the students work in class. After a tour of the school’s library, he returned to his temporary residence at Gyuto Tantric University.