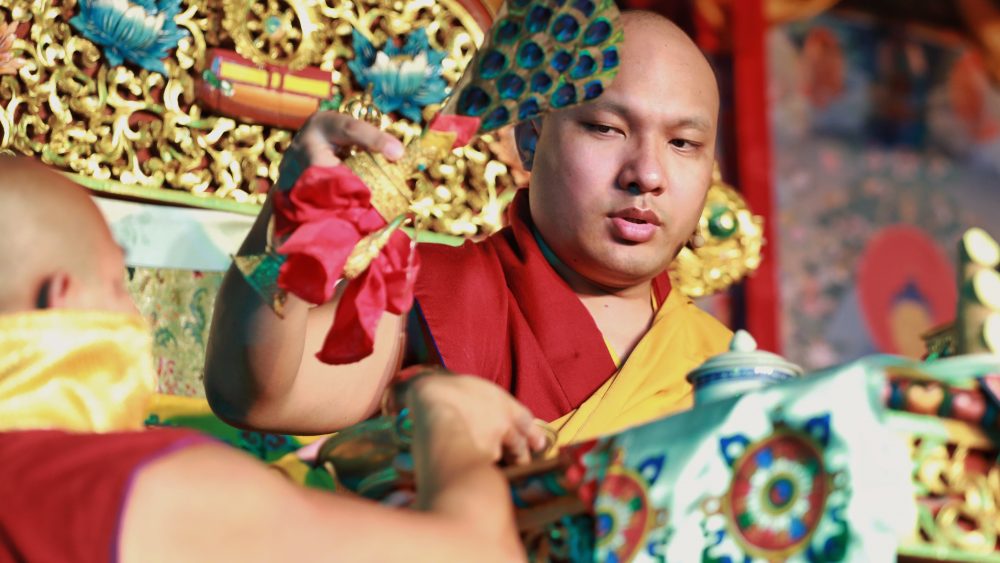 Times of Joy and Sorrow: His Holiness Reflects on His First Visit to the UK

May 27, 2017 – Lakeside International Hotel, Frimley Green, England
In the concluding public event of the 17th Karmapa’s first visit to the United Kingdom, nearly 2,000 people gathered at Lakeside International Hotel near Frimley Green in Surrey to receive an Amitayus Long Life empowerment. The Nepalese and Gurkha community turned out in force to welcome the 17th Karmapa and were joined by devotees from the UK, Europe, America, and other countries worldwide. This was the second part of a one-day program organised by the Buddhist Community Centre UK.

Monks from various Kagyu European centres and the Karmapa’s ritual master and attendants had worked hard to prepare the stage for the empowerment. The golden pagoda used during the Chenresik empowerment earlier in the visit now enshrined an image of Amitayus and a smaller image of Guru Rinpoche. To the left of the images, a large bowl contained long-life pills made from roasted barley and butter and to the right four bowls contained long-life nectar. A wooden throne of engraved and painted panels had been brought from the main shrine room at the BCCUK Centre in Aldershot. Commissioned specially from Nepal and made by skilled Nepali craftsmen, it was the throne used by His Holiness the 14th Dalai Lama during his visit to the BCCUK in 2015. Fresh flowers added life and colour: two huge vases contained mixed bouquets; boxes of exotic orchids graced the front of the stage, and to either side, tall spikes of red and purple lupins reached upwards.

As the Karmapa entered the auditorium for the first time to perform the preparatory rituals, Nepali women came forward bearing traditional offering bowls of rice, milk (as a respectful substitute for the more usual alcohol), food, and water for His Holiness’ blessing. When the Karmapa returned to begin the empowerment, a Gurkha soldier, in full ceremonial dress, piped him in. After mandala offerings and introductory prayers, there was a short break in the empowerment for speeches.

In his opening address, Mr Kaji Sherpa, founder and former president of the BCCUK, spoke effusively of the Karmapa’s contribution to society: “We are truly honoured and delighted to be standing in the presence of His Holiness the 17th Gyalwang Karmapa, the head of the Karma Kagyu lineage, and a great spiritual leader, who through the demonstration of compassion and warm-heartedness has transcended cultures, religion, race, and social status. Your Holiness, your passion and pursuit of educating the world about the need for environmental preservation and welfare of animals, your teachings on the philosophy of non-violence to encourage world peace, your role in championing equal rights and opportunities for women, and your contribution towards digitising Buddhist texts, are not only invaluable today but will continue to benefit many generations to come.”

Next Kyabje Chime Rinpoche, one of the first Tibetan lamas to reach the West and a devoted student of the 16th Karmapa, talked of the connection between the Karma Kagyu and Nepal, which began with Jetsun Milarepa, who meditated in Nepali caves, progressed through other Karmapas, and included the visit of the 16th Karmapa in the 1960s.

“The 16th Karmapa was my teacher,” he explained. ”Now I’ve met the 17th Karmapa. He has only changed his body; his mind is exactly the same.” And then told the story of one of his students, an artist, who usually drew horses until suddenly she developed an artist’s block and was unable to draw them anymore. On her way to Australia, she stopped off in India and had an audience with the Karmapa. She asked him, ”What can I do to serve you?” The Karmapa replied directly, “Draw horses!” After that, she had no problem. “He’s a miracle worker,” exclaimed Chime Rinpoche.

Before moving on to the main event, the teaching, blessing and empowerment by His Holiness the Karmapa, the audience stood for a minute’s silence and prayer for the victims of the Manchester terrorist attack on 22 May 2017. Led by Khenpo Tsewang, Buddhist chaplain to the Gurkhas and spiritual leader of the BCCUK, everyone joined in chanting the Dewachen Aspiration Prayer for all sentient beings to gain rebirth in the Pure Land of Amitabha Buddha.

Finally, it was the Karmapa’s turn to speak. He thanked everybody, and then, in a quieter more sombre voice, he reflected on how his joy during this first visit to the UK had been counterbalanced by profound sadness at the terrorist attack in Manchester and drew lessons from the experience. On the morning immediately following the attack, His Holiness had led prayers for the dead and injured before giving a talk at the Royal Asiatic Society. During his visit to the chapel of King’s College Cambridge, he had lit candles for the victims, but this was the first time he had spoken publicly about the atrocity: “That this visit to the UK has finally happened has been a cause of great joy for me. On the other hand, the bombing in Manchester, that terrible tragedy in which many people, but especially many young people, lost their lives has caused me great pain and sadness.” He continued, “I think we find ourselves at an interesting moment in time, where different types of joy and different types of sorrow occur simultaneously.”

Returning to topics he had covered earlier during his teachings at Battersea Evolution — interconnectedness, empathy, and compassion—His Holiness drew a lesson from this shared experience of suffering. “I consider it meaningful that we have been through these experiences together. It is my hope and aspiration that we can continue in this way, sharing the joys and sorrows of others, and of all sentient beings. Seeing that our joys and sorrows are part of others’ experiences and that the joys and sorrows of others are a part of our own experience, I hope that we can continue being empathetic towards each other and can persevere into the future with great strength of heart and courage.”

In another vein, the Karmapa expressed his gratitude to Mr. Kaji Sherpa and all the other officers of the BCCUK for the leadership they were giving to the Nepali Buddhist community. Having spent the day with them, he joked, he was sometimes not certain whether he was in the UK or in Nepal. He concluded with the promise that, in accordance with Himalayan custom, he would give the blessing of the vase empowerment individually to everyone present by placing the long-life vase on their heads.

The empowerment resumed, and after its completion, the Karmapa continued his teaching, emphasising once again the fundamental interconnectedness of all sentient beings. The Amitayus empowerment was for long life, he began. Everyone wants to enjoy a long life and also hopes for a life of well-being and happiness but for this, two conditions are necessary: a healthy body and a healthy mind.

This idea is encapsulated in the Tibetan word dekyi, often translated into English as “happiness.” The first syllable de refers to physical health and well-being, whereas the second syllable kyi refers to mental happiness and well-being. Thus, to lead a happy life, we need the external factor of a body free of illness and the internal factor of a mind that is not overwhelmed or weighed down by suffering. The Karmapa pointed out that physical well-being on its own is not sufficient; our minds also must be turned in a positive direction.

Furthermore, our experience, for instance within a dysfunctional family, shows us that it is impossible to be happy when others around us are unhappy. Our happiness, well-being, and joy depend on the happiness of others. This is equally true in our family, in our society, and in the world at large. Due to the interdependent nature of the world we live in, we cannot be happy when others are suffering. The happiness of others is part and parcel of our own happiness. This interconnectedness extends to include all sentient beings. Hence, His Holiness urged, it is important for us to value and cherish all life.

“In particular, the many sentient beings whose lives are cut short, just for a few moments of flavour on the tongue of a human being,” he cautioned. The Karmapa counselled everyone to reflect on this in light of our dependence on the happiness of other sentient beings for our own happiness.

And finally, as promised, everyone in the audience was able to receive the vase blessing from the hands of His Holiness. A long line formed into a side-room and one-by-one, people stepped forward to have the vase placed on the crown of their head.

Thus the historic first visit of the 17th Karmapa, Ogyen Trinley Dorje, to the United Kingdom drew to an end, but as the audience dispersed to make their way home, they carried with them the hope and His Holiness’ promise that this would be the first of many visits to come.