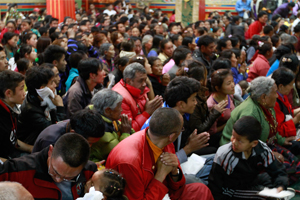 From the moment of His Holiness the 17th Karmapa’s arrival in Varanasi, the monastery where he is residing has been thronged by thousands of people from across India’s Himalayan belt and Tibet, all seeking the Gyalwang Karmapa’s blessings.

During his past visits to Varanasi, Gyalwang Karmapa has typically offered public audiences on alternating days, inside the monastery building. However, due to the large numbers of people seeking the blessing of the Gyalwang Karmapa, His Holiness is now holding daily public audiences. Many Tibetans newly arrived from Tibet, as well as people from Ladakh, Arunachal Pradesh, Sikkim, and Kulu, Manali and Spiti in Himachal Pradesh all have converged in central India in advance of the Kalachakra initiation to be given next week in Bodhgaya by Tibetan Buddhism’s supreme leader, His Holiness the Dalai Lama. Pilgrims coming to attend the Kalachakra are taking what is for many of them a once-in-a-lifetime opportunity to receive the additional blessings of the Gyalwang Karmapa.

To accommodate the overwhelming requests for blessings, His Holiness the Karmapa is holding daily public audience outdoors, on the grounds in front of the monastery’s main hall in Varanasi.