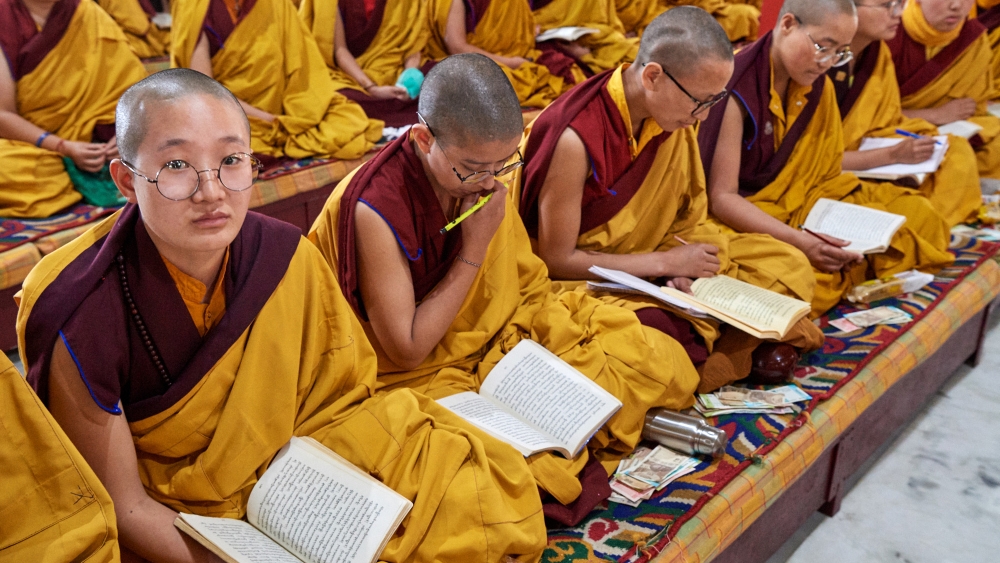 The Superior Trainings in Discipline and Samadhi

His Holiness resumed his exposition of Chapter 11 by reading the opening section on the precepts of engaged bodhichitta:

He explained that distinguishing between the three trainings, also throws light on the Tripitaka [the three baskets of the Buddha’s teachings—the Vinaya, the Sutras and the Abhidharma]:

He pointed out that non-Buddhists have trainings in discipline, samadhi and prajna, either partially or wholly, and they also exist in secular life. A person who makes a promise or vow to give up eating meat is training in discipline. These days, people who have no faith in dharma or even religion, meditate. Research scientists in all fields are involved in deeper and deeper analysis of phenomena. Hindus have fasting vows, Jains uphold a very strict discipline of ahimsa [non-harm] and even during the time of the Buddha there were Brahmanic religions in India that taught dhyana. Before his enlightenment, Shakyamuni learned how to practise dhyana and meditation in the Brahmanic tradition with Ārāḍa Kālāpa and Udraka Rāmaputra. It’s necessary, therefore, to establish what is distinctive or ‘superior’ about the Buddhist trainings in discipline, samadhi and prajna.

First, their order is according to the relationship of cause and effect.

The first training is necessarily in discipline, because, as Nagarjuna said in his Letter to a Friend, “Like the ground for all that moves and does not move, discipline is the basis for all qualities.” Because of discipline, His Holiness explained, we can develop the samadhi of our mind resting in equipoise, and because of samadhi, we can develop the prajna that liberates our mind.

A. The Bodhisattva’s Training in Discipline

1. The discipline of refraining from harmful acts

When a householder has the pratimoksha vows, or a monastic holds the bhikshu or sramana vows, these are the actual discipline of refraining from harmful acts.  We then have to consider what counts as discipline. The essential factor is not necessarily the vow but the intention. The intentional wish to give up killing is discipline but merely not killing is not discipline. Cows, for example, do not eat meat but they are vegetarian naturally so that is not discipline. Discipline generally means something that we are specifically keeping. So laypeople that have taken refuge and keep the refuge precepts are observing discipline, even though they do not hold pratimoksha vows. The essence of non-harm is to give up the ten non-virtuous actions, the essence of which is giving up the seven non-virtues of body and speech.  Then again there are people who have given up taking life, even though they do not hold any vows. His Holiness suggested this might count as the discipline of giving up harming others, but needed further investigation.

2. The discipline of gathering virtuous qualities

This is the virtue of not giving up the six transcendences [perfections], His Holiness elaborated, but rather stabilising your practice of them and increasing them. We need to be committed to all types of virtuous action—listening to the scriptures, reciting texts, circumambulation, prostrations, meditation—whether they are large or small, a gram or a kilogram  of virtue, each one counts. We gather virtue according to our own capabilities. The Karmapa cited the Geluk practice of reciting a puja before teachings in order that no internal or external obstacles or adversities would arise. If you do not do this your studies will not go well. Study is a dharmic activity and many adverse conditions can affect its efficacy, he warned. Some we recognise, but some we only recognise once they occur, when it’s too late.

3. The discipline of benefitting others

Bodhisattvas are committed to work for the benefit of others as strongly as if their hair were on fire. It’s their job. This is extremely important. When we talk about the work of a bodhisattva we often think in terms of the 18 primary downfalls of the Bodhisattva Vows.  However, this list details their work exactly.

His Holiness postponed commenting on the remaining five.

In summary, he concluded: Bodhisattvas only have one responsibility — to accomplish the benefit of sentient beings, and so they engage in the three aspects of the training in discipline. The differences between these are primarily in function only – in essence they are the same and are all contained in the Bodhisattva Vow.

His Holiness then explored the role of these in the Vajrayana:

The three types of discipline are not only important in the causal vehicle of the Mahayana, but they are also important within the secret mantra Vajrayana. As it says in the tantra of the Tip of the Vajra: ‘Steadfastly uphold the three disciplines; the precepts of moral discipline, the gathering of virtuous qualities, and benefitting beings’.

Within the three lower classes of tantra, the primary vow is the Bodhisattva Vow. If you hold the pratimoksha vows and the Bodhisattva Vow there is no particular tantric vow to keep. But in the unexcelled tantra —Anuttarayoga (bla-med rnal-‘byor rgyud)—there are vows.  Although there are different ways in which this described and explained in different Vajrayana traditions, this is how it is described in Kagyu and Geluk, and particularly in the presentations of Karmapa Mikyö Dorje, and the Great Karma Thinley’s Karmashingta [The Chariot of the Karma Kamtsang]. These three types of discipline are important to practice in the resultant vehicle of the secret mantrayana.

B. The Superior Training in Samadhi

His Holiness then moved his focus to the second training – the superior training in samadhi—and the difference between samadhi and shamatha.

Samadhi is one of the five mental factors, it refers to the ability to rest one-pointedly on an object, and the superior training in samadhi aims to develop a one-pointed volition that focuses one-pointedly on a focus.  At this stage, samadhi can be short or long.

The third stage is developing samadhi with the pleasure of pliability of body and mind in preparation for the first dhyana.

These are signs that he had achieved the pleasure of pliability.

Using the analogy of surgery, the Karmapa illustrated their interwoven function. A surgeon needs steady hands and the medical instruments used need to be very sharp. Shamatha is like the surgeon’s steady hands, a stability of mind and focus. Insight is like the razor-sharp scalpel, however difficult or profound, it can cut through.

When we first start training in resting meditation, we might focus on neutral objects such as sticks and pebbles. Samadhi is a mind resting one-pointedly on a virtuous focus, so, though this is an effective method, we cannot call it samadhi.

C. The Superior Training in Prajna

The third training is the training in prajna, and its essence is the prajna that is able to fully examine mental projections.

There is the prajna that realises the relative: the ability to become learned in all areas of knowledge such as healing crafts, logic, grammar and Buddhist philosophy. Non-Buddhists are able to study these areas too, and although theirs is a type of prajna, it is not the training in prajna meant here, because it is not embraced by true refuge or the wish for liberation. When we study areas of knowledge, it becomes a cause for achieving buddhahood only if it is embraced by true refuge, the wish for liberation, and bodhichitta, and then dedicated to enlightenment. If you build thousands of monasteries it may look like a definite cause for achieving buddhahood, but this would depend on your motivation and whether the action is dedicated to enlightenment or not, His Holiness observed. When listening and contemplation are embraced by this distinct intention, it becomes training in prajna. Otherwise, it is just study.

In conclusion, His Holiness summed up the function of these three trainings: discipline sets boundaries to the actions of body and mind and turns us away from distractions; samadhi focuses our mind one-pointedly on virtuous phenomena; and prajna examines the nature of things as they are so we can understand them.

He then emphasised the great chance that the nuns possessed.

We have met gurus, we have clear minds, intelligence and opportunity. Until we achieve buddhahood, we have the opportunity to achieve buddhahood. The main thing is we need to make effort and see what we can achieve in this lifetime, and make the aspiration for it to happen in future life times. It is important that we have enthusiasm and are not discouraged. It can’t be achieved in a day or two…even worldly things such as preparing for Losar take time.

Supported by the strength and resolve of our bodhichitta we should be prepared to direct our minds towards buddhahood and not give up, though it take three uncountable aeons.