The second session of the teaching began with the text:

Thus there are few who have turned their minds away from this life. Many say they are bodhisattvas, but I wonder whether they are really focused on this life. I think about what I would do if I were to die tonight and have never considered any ambitions for tomorrow and thereafter. Because of that, I have understood the critical points of Dharma. That alone is the greatest sustenance for meditation. I had thought it would be likewise for others too, but when I tell them, their attitudes have never been compatible with mine.

His Holiness commented that this illustrates how Potowa applied the Dharma that he knew as an antidote to the afflictions. Knowing the Dharma and teaching the dharma are not sufficient. The Dharma has to be practised as it is taught, internalised and applied to our lives.

In the text, Geshe Potowa explains that people express concern for him. They label his views as too extreme and try to dissuade him from his practice. This, he argues, is one of the four black dharmas [downfalls of the Bodhisattva Vows], making someone regret doing something which they should not regret. He feels discouraged and depressed that concerned people give such advice because it is obvious to him that they have not understood the Dharma. It is as if they are saying: “Do whatever you can to not be liberated from samsara”. The problem, as he sees it, is that too many Dharma practitioners are still concerned about mundane things and have not really renounced samsara.

Potowa makes no plans for the future and mistakenly presumes that others practise similarly.  Because of this, others worry about what will happen to him and fear he will die in desperate circumstances. He, in turn, feels pity and compassion for them because they are so focused on this life and have failed to understand the Dharma.

The Karmapa continued his commentary:

We need to turn inwards and find inner conviction, belief and confidence, otherwise knowing how to meditate is of no benefit, and knowing how  to teach dharma does not help…we have to realise and truly believe that all composite phenomena are impermanent. In addition, we need to recognise and resolve that this life is futile.

Other people try to make Potowa regret the way he practices. He, on the other hand, sees how people waste their lives focused on getting food and clothing. His Holiness commented further that the sutras teach that by rejoicing in another’s virtue we gain half ourselves. Hence, if they had known the Dharma, the people should have been rejoicing in Potowa’s dedication to the Dharma.  Instead, their advice to Potowa and their actions show how attached they are to this life. Potowa found it impossible to discuss Dharma with such people and just let them prattle on.

Potowa describes how even people who were considered to be good Dharma practitioners had the wrong priorities; they said they intended to stay in a monastery to practise the Dharma intensely but first put all their efforts into accumulating food and clothing so that they would not be dependent on anyone. “There are no more than just one or two practitioners who think, ‘Let this life turn out as it will,’” he states.

His Holiness illustrated the dilemma:

If we were to live for fifty years, we would spend twenty-five of those asleep. Of the twenty-five years remaining, until you’re twenty years old, you don’t have the maturity to practise like that. So once we have reached maturity, that leaves just five years to practise. We spend a quarter of that time acquiring food and clothing. So, of that remaining five years we have only three quarters left to either practise the Dharma or do worldly things. And during the remaining time, if we think that first we are going to accomplish all we need for this life and then we will accomplish everything we need for the next life, there will not be enough time.

Having made it very clear: “It’s not possible to accomplish everything for both this life and the next,” he concluded.

The Karmapa then compared those who have not turned away from the concerns of this life, who worry about old age and death, to bees collecting nectar. The bees spend all their time gathering pollen from flowers only to have their honey stolen in the end. There is nothing stable or lasting in this life because everything is impermanent, everything is in a state of flux, and in the end we die.

“If we cling to permanence and have strong attachment this will only increase our suffering,” he advised.

To conclude the teaching, His Holiness led a ten-minute Shamatha meditation on the sound of a special singing bowl, made from diamond dust, the residue when diamonds are cut.

“Today, I will pretend to be an artist,” he joked.

The pavilion fell completely silent as monks, nuns and laypeople sat straight-backed and focused while the Karmapa skillfully varied the speed, intensity and pitch of the resonating bowl. 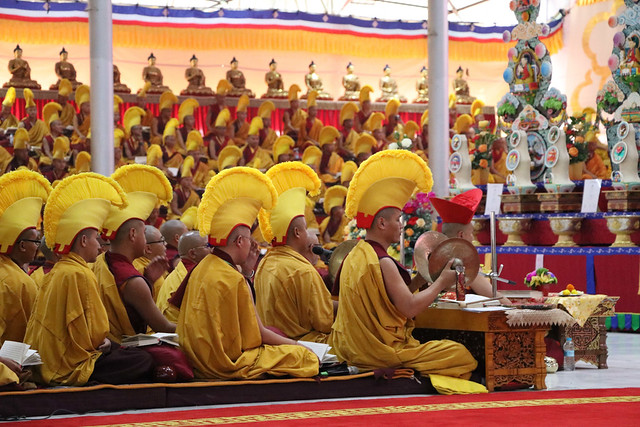