The Opening Session of the 34th Kagyu Monlam Chenmo in Bodhgaya

Thriving Aspirations for the World come from a Peaceful Mind

Just before the break of dawn, His Holiness the 17th Gyalwang Karmapa led the assembly of many thousands into the seven days of virtue and pure aspirations of the 34th Kagyu Monlam.

With a wish to re-establish ancient connections, His Holiness has instated Sanskrit chants at the beginning of the first session. The impressive Sanskrit sounds resounded in harmony through the dark of the Bodhgaya morning, reminiscent of Buddhism’s origins.

“This is the Vajra Seat, the essence of enlightenment,” the Karmapa said and initiated this Monlam by imparting the Sojong vows followed by advice on how to make our aspirations truly fruitful.

He inspired those gathered there with his advice on the need to bring peace to one’s own mind in order to bring peace to the world. You need to have peace in your mind, endowed with love and compassion, to be able to make aspirations from the depths of your heart,”; he counselled and added that, at least for these seven days, we need to be our best selves.

He talked about the people he met who had come from Tibet. Though ordinary people, they wished for peace in the world wholly and honestly, from the bottom of their hearts.

“It is very rare to find that type of person. When I see people like that, I think: maybe there is still hope for the world, for sentient beings.”

He laid bare the perils of convincing oneself of being a bodhisattva but acting out of selfishness. It makes one’s mind fixed and ill-suited for change. “It is really dangerous to pretend to be a protector of beings,” he warned.

He personally assumed the role of chöpon for the opening rituals of the first session. He walked through a royal court-like setting of Khenpos, Rinpoches and Tulkus, flanked by hundreds of gelong and a handful of gelongma on the wings of the stage, up the steps to a small, elegant wooden mandala where a statue of Buddha as an infant was placed.

After the gathering chanted invitations to the Sugatas, the Gyalwang Karmapa performed the rites of washing, drying, and offering clothes and anointment, then completed the ritual with prostrations.

During this time H.E. Goshir Gyaltsap Rinpoche was absent; he had gone to simultaneously perform a special offering at the Mahabodhi Temple.

The assembly chanted Praises from the Sutra of Ornamental Appearance, repeating the words: “I prostrate to you who rely on nothing”.

In a short teaching the Karmapa gave on The Sutra in Three Sections, the essential practice for restoring the Bodhisattva Vows, he recounted an old anecdote. In ancient India, this sutra was recited by those who committed great misdeeds. But Tibetans recited it daily. When certain Indian masters arrived in Tibet, they noted humorously that Tibetans must have transgressed a lot.

But, the Karmapa explained, in the billion-fold universe, our misdeeds are countless. Among all of them, the greatest are the violations of the three vows which are repaired through reading this sutra.

The first section is confession. He advised us to read this while thinking we are in the presence of the 35 Buddhas, taking them as the power of support, offering prostrations and confessing to them all of our misdeeds from beginningless time. The second section focuses on rejoicing. It is said that rejoicing and meditating on the merit of all buddhas, bodhisattvas, pratyekabuddhas and shravakas, bring an incalculable amount of merit. It is one of the easiest and most powerful ways of gathering merit. Dedication for all beings to attain enlightenment, the topic of the third section, is paramount for preventing the loss of virtue due to anger or regretting having done a virtuous deed.

Immersed in this sublime atmosphere, in the grandeur of the Monlam Pavilion, over 10 000 people from more than 50 countries chanted in harmony for peace in the world, and the 34th Kagyu Monlam was opened, leaving us nothing else to do but rejoice. 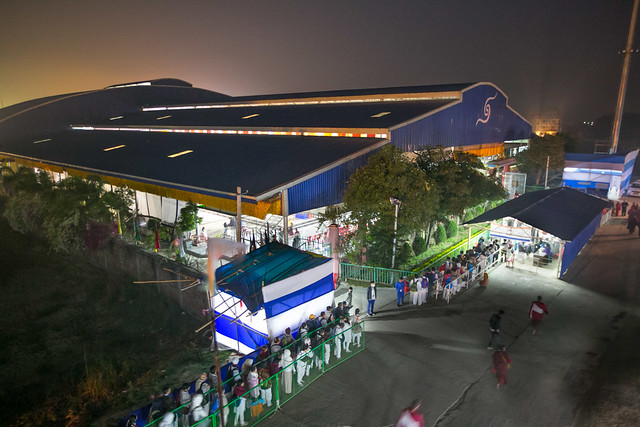