25 February, 2017 – Monlam Pavilion, Bodhgaya
The night session of the Mahakala puja started at 11 p.m. The pavilion was covered in deep blue drapery inscribed with golden, fiery imagery allusive of the brilliant wisdom blazing through emptiness. The blackened atmosphere of the interior blended into singularity with the quiet night outside.

Along with 5,000 monks and nuns in their usual places, about 300 determined lay practitioners remained to practice throughout the night. This night’s ritual text is called the Abridged Incinerating the Hostile (Dang ba rnam sreg las btus pa), also known as the Golden One. Rather than inducing sleep, this kind of night, with the powerful sounds of chanting and drumming, was meant to evoke lucidity and wakefulness.

Below the main statue of Buddha Shakyamuni, statues of Mahakala, Mahakali and Dorje Lekpa were guarded by an impressive, black armour flanked by golden weaponry, as if strategically placed to wage war on all human drama. The scene was reminiscent of the legend of the great protector Mahakala. The story says that his name was Gelong Deway Khorlo (Bhikshu Wheel of Joy) who belonged to the retinue of a previous Buddha named Sangye Tsuktorchan (Buddha with an Ushnisha). Having developed special cognitions and ability to perform miracles, the proud bhikshu competed with the Buddha and, naturally, lost. That caused him great disappointment, so the god Shiva appeared to him and said: “If you pray to be born as my son, I will give you dominion over the three realms.” Driven by his desire for victory, he prayed to Shiva to fulfill the prophecy. The Buddha knew of this and told him: “Except for some temporary happiness, being born as Shiva’s son has little benefit.” When the bhikshu confessed his faults, the Buddha rectified the prophecy of power into that of enlightenment saying that the bhikshu Wheel of Joy will indeed be reborn as Shiva’s son but he will generate the resolve to be fully awakened in order to benefit others and will eventually become enlightened as the Buddha Telway Wangpo. Just as the Buddha predicted, a son with very dark skin and terrifying appearance was born to Shiva and Umadevi. He possessed great power and was given the name Mahakala, the Great Black One.

The potent sounds of drums in the Pavilion exuded a sense of resoluteness calling to mind a different night of resoluteness above all other, right here in Bodhgaya. It was the night that removed the darkness of ignorance when Siddhartha Gautama sat under a tree and vowed: “Though my skin, my nerves and my bones shall waste away and my life blood go dry, I will not leave this seat until I have attained the highest wisdom, called supreme enlightenment, that leads to everlasting happiness.”

Firstly, the god Mara sent armies of temptations but Gautama did not move and, following Mara’s defeat, in the first part of the night came memories of all his past lives and in the second, the realization of truth. Once the morning star arose, it was all over. He was the awakened one.

Mahakala, who had wandered the three realms by then, came to Bodhgaya after Buddha’s awakening and made the commitment to guard the Buddha’s teachings, thus becoming a powerful protector for those on the path to enlightenment.

The puja in the Pavilion continued throughout the cool night as the practitioners chanted and meditated wrapped up in blankets and jackets. Before the morning sun would bring the warmth of blessings with the familiar, powerful presence of the 17th Karmapa Ogyen Trinley Dorje, those who aspired for the benefit of others would remain in meditative poise and, with the practices of the great protector Mahakala, revel in the sea of darkness and delight. 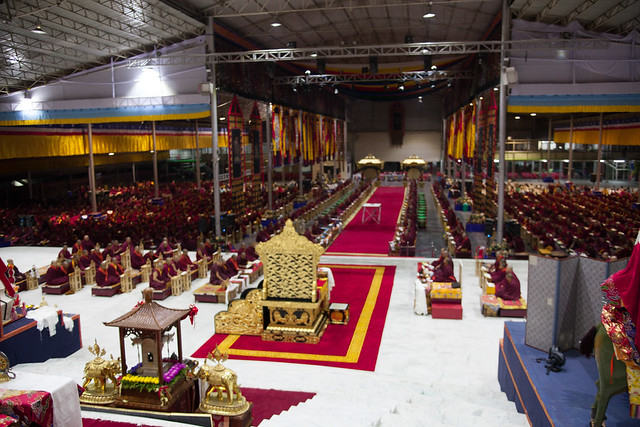