The Karmapa Arrives in America; California Offers A Joyful Welcome 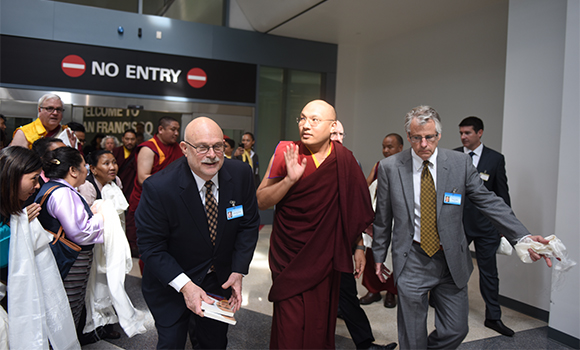 Dharma friends from around the Bay Area converged on the San Francisco airport this afternoon, urgently texting one another to reassure themselves they were all in the right place at the right moment to greet His Holiness the Karmapa. His flight arrived with a slight delay, which allowed the large numbers of Tibetan as well as international disciples to position themselves as His Holiness was ushered through the terminal towards his vehicle. After an emotional welcome by nearly 200 overjoyed students, His Holiness the Karmapa entered his car, with a smile and a gentle wave to those standing on the curb bowing and waving to him.

The party proceeded directly from San Francisco airport to Rosewood Sand Hill in Palo Alto, California, where the traditional welcome with a tea and rice ceremony awaited him. All rose as His Holiness entered the intimate venue and ascended the throne. The mandala offering was made to the 17th Karmapa by Lama Lodru of Kagyu Droden Kunchab Dharma center of San Francisco. Also making offerings in the procession were a Khenpo from Palpung Lungtok Choeling in nearby San Jose, Lama Tsultrim Allione of Tara Mandala, Dr. James Doty, founder and director of Stanford University’s Center for Compassion and Altruism Research and Education and representatives of the Tibetan Association of Northern California.

Although the webcast team had arrived in San Francisco only the prior evening, the media team ignored jetlag and scrambled to set up, and were able to share the occasion with those not physically present via live webcast.

After the tea and special rice were offered, marking an auspicious beginning, the reunion adjourned for a break and resumed with an informal reception two hours later. In the interim, old Dharma friends reconnected as Western Buddhist teachers and long-time practitioners mingled and basked in the glow of the moment. Many familiar faces filled the hall, including teachers Jack Kornfield, Lama Palden Drolma, Lama Surya Das, Lama Tsultrim Allione, Norbu Tenzing and even Michael Imperioli.

Representatives of local Tibetan Buddhist centers from all over North America were on hand, including Karma Triyana Dharmachakra, various KTCs, Karma Sonam Dargye Ling in Toronto, Tergar Meditation Center in Minneapolis, Palpung Lungtok Choeling and other centers. The crowd spilled outdoors onto the lawn, and clusters of Tibetans sat on the grass, giving the afternoon the feel of a large family picnic.

Just before seven o’clock, His Holiness the Karmapa returned to the ballroom at the Rosewood Sand Hill, which had been transformed for the occasion into a less formal seating arrangement.

Patty Waltcher, who had organized the welcome reception, opened the event by introducing the three board members of the Karmapa Foundation, who were all present: Dzogchen Ponlop Rinpoche, Eric Colombel, president and founder of Tsadra Foundation and Dekila Chungyalpa, an environmentalist and research scientist at Yale University. She warmly thanked them for all their efforts to make it possible for His Holiness the Karmapa to visit so many universities and Dharma communities on this trip.

As managing director of the tour, Peter Volz offered a brief introduction to the Karmapa and his activities. As soon as he mentioned His Holiness’ plans to establish full ordination for women, the hall burst into applause. Speaking as a father of a college-age child, Peter Volz expressed his concern at the existential crisis of today’s young people, who are overwhelmed by the enormity of the challenges facing the world today. He described the urgent need for leadership on social change, and the aim of this trip to help meet that need.

Next to speak was Dekila Chungyalpa, who recalled the aspiration that His Holiness the Karmapa had expressed during his first visit to the USA to spend two months a year here, an aspiration that was now coming to fruition. She outlined the stops at universities and spoke of Yale’s plans to award His Holiness its most prestigious award, the Chubb Fellowship, and of the University of Redlands’ plans to grant him an honorary PhD. She noted too the overwhelming interest that has led to seats at university lectures being snatched up within hours or even minutes of opening for ticketing. As an environmentalist she spoke movingly of the positive impact the Karmapa has had on conservation in the Himalayas, turning Buddhist monasteries and nunneries into local centers of environmental action and education. She evoked his particular quality as a spiritual leader who inspires transformation that moves from the meditation cushion to permeate society.

Following this, time was allowed for people to mingle, and a long line swiftly grew of people eager to interact with the 17th Gyalwang Karmapa himself. When all had had their moment with His Holiness, the organizers requested that His Holiness share his thoughts.

He first expressed his sheer joy at having this opportunity to spend two months in the United States. He then spoke of his own experience listening to the plans for him to deliver lectures on so many different topics at the various universities.

“I appreciate their kind words, but all this praise puts me under a lot of pressure and puts me on the spot to say something important,” he said wryly. “I am not sure how I will perform under such pressure, but hopefully it will turn out well.”

He went on to express his gratitude to everyone for showing him such a warm welcome, and singled out those who had exerted such efforts on behalf of this trip. “Thank you from the bottom of my heart,” he said.

“This is the first time I have had an opportunity to spend such an extensive amount of time in any foreign country,” he observed. “Therefore, I would like to take this opportunity to offer my sincere thanks to the Indian Government, and to all my supporters and friends in India who helped to make this possible.”

When he learned that he would be able to make this two-month trip, initially he was elated, the 17th Karmapa said. He joked that only later did it sink in just how hectic the pace and complex the logistics would be. “Two months really is a long time,” he said playfully.

With a final thanks to all assembled, His Holiness arose and departed. Long after he had left the hall, those gathered lingered on, reluctant to bring the joyful occasion to a close, even knowing that the months ahead hold many more opportunities for closeness and connection.