The Historic Visit of the Gyalwang Karmapa to Palpung Sherabling Monastery 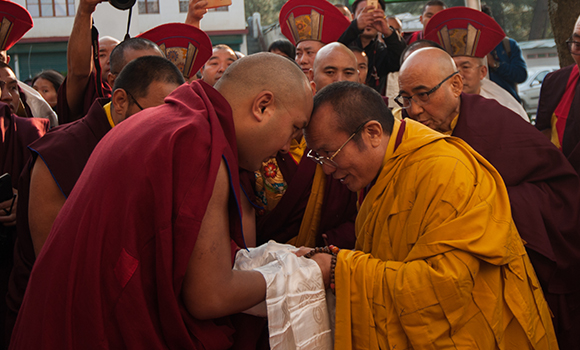 December 8, 2016 – Upper Bhattu, Baijnath, HP, India
Since arriving in India in 2000, the Gyalwang Karmapa had waited almost 17 years to visit Kenting Tai Situ Rinpoche at his nearby monastery of Palpung Sherabling. To celebrate this special occasion, crowds had gathered in a festive mood from all parts of the Himalayan region and from abroad.

The day before His Holiness arrived, the monastery was astir with preparations. Diamond-shaped images of the 16 auspicious symbols and substances lined in bright colors the first part of the monastery road. In the middle of the road close to the main shrine hall, devotees were painting a welcome of the 8 auspicious symbols in brilliant white. The shrine hall was filled with lay people making stately flower arrangements of fragrant lilies while the monks were setting up the sound system, video camera, and the huge LED screen on the veranda outside so that those sitting in the courtyard could see the events inside. Suspended around the courtyard from its third story were immense thangkas depicting Vajradhara, the founding forefathers of the Karma Kagyu, and the sixteen previous Karmapas.

Early on the day itself, a wide red carpet was laid over the eight auspicious symbols. Mounds of fresh flowers in white, orange, and deep maroon were being arranged in a Dharma wheel in front of the east door and in triangular patterns along the red path, leading up the stairs and into the main shrine hall. At the end of the path awaited an impressive golden throne, set in front of a two-story high statue of Maitreya, the future Buddha.

As the Karmapa’s cavalcade approached the celebratory gate nearest the monastery, two young women held the customary offerings of tsampa and chang while standing in front of a large gathering of local people. After a brief pause to receive their welcome, the Karmapa’s motorcade continued to the place where the eight auspicious symbols began. Here the Karmapa waited inside his vehicle as it was circumambulated by a formal procession: brocade banners and pendants glinted in the morning sun and the music of tall drums and jalings filled the air as well as a leitmotif of bells and hand drums played by 16 offering goddesses. When they passed, the Karmapa descended from his vehicle and walked behind eight tulkus (reincarnate lamas) who carried incense and guided him down to the monastery where Tai Situ Rinpoche, Mingyur Rinpoche, and Garwang Rinpoche awaited the Karmapa near the east door.

They accompanied him along the path into the shrine room, where the Karmapa made three bows and then walked with Situ Rinpoche to light a generous butter lamp in front of Maitreya Buddha. Once the Karmapa had sat on his throne, the three main reincarnate lamas—Situ Rinpoche, Mingyur Rinpoche, and Garwang Rinpoche—took their seats followed by the remaining eight tulkus: from Sherabling itself came Pungri Tulku, Shagam Tulku, Tulku Monlam Rigse, Tulku Damcho Norbu, and Tulku Trinley Dondrup, and from outside came Gyalpo Tulku, Drikung Gyalse Tulku, and Tana Tulku. To celebrate this brilliant occasion, the 16 offering goddesses danced, moving gracefully in the center aisle.

After a welcome speech, Khenpo Thupten Karma gave a half-hour talk from memory on the five perfect conditions—the time, place, teacher, teaching, and retinue. Mingyur Rinpoche gave the mandala offering and Situ Rinpoche offered the Karmapa the representations of body, speech, mind, qualities, and activity. For those who had been at Tsurphu, the Karmapa’s seat in Tibet, during his enthronement in 1992, the scene was very familiar, only then Situ Rinpoche had also offered, and the Karmapa had received, the eight auspicious symbols and eight auspicious substances one by one. After the Karmapa given long scarves to Mingyur Rinpoche and Garwang Rinpoche, tea and rice were served to everyone and prayers for the Karmapa’s long life were recited.

Khenpo Gyaltsen Phuntsok gave the history of the relationship between the Gyalwang Karmapa’s lineage and that of Tai Situ Rinpoche. The Khenpo traced their connection back to the first Situ Rinpoche, who was a disciple of the 5th Karmapa, Deshin Shekpa (1384-1415), and brought their relationship through the centuries to the 16th Karmapa Rigpe Dorje (1924-1981). He discovered and enthroned the present 12th Situ Rinpoche, who in turn found and enthroned the 17th Karmapa, Ogyen Trinley Dorje. One of Khenpo’s concluding citations was taken from Chokgyur Lingpa’s predictions, foretelling that the 17th Karmapa would have a close relationship with Situ Rinpoche. At the end of his talk, the morning’s merit was dedicated, and everyone was invited for lunch.

The afternoon saw the performance of Vajra Nyitham (‘cham or vajra dancing) in the courtyard covered in a tent of rainbow colors. The Karmapa, Situ Rinpoche, and Garwang Rinpoche presided in a windowed balcony above the open space while Mingyur Rinpoche sat on the side with the Dorje Lopon, three chant masters, and musicians. In an unusual personal note, all the performing monks were called out by name, and this first time they danced without masks so it was possible to observe their concentration as they engaged in this moving meditation.

To alternating cymbals and chanting, the monks turned in smooth circles and leaps that seemed to be lifted by the sound. Bringing in the blessings and sending them out, they danced without a break for over three hours, lead by the champon (head of the dance) who showed what emptiness is like in motion.

The atmosphere also had its informal side as tea and Tibetan kapse (fried biscuits) were served. Leaning over to his left side, the Karmapa sometimes chatted with Situ Rinpoche and at other times leaned out the window to see everyone more clearly. The Karmapa himself was trained in vajra dance at Tsurphu where he had performed, and then in recent years he took the role of Guru Rinpoche during the vajra dances in Bodhgaya. The day came to a close as the last dancer spun a circle and climbed up the stairs to disappear behind the floating yellow curtains.[Best_Wordpress_Gallery id=”24″ gal_title=”The Historic Visit of the Gyalwang Karmapa to Palpung Sherabling Monastery”]