The Gyalwang Karmapa’s Yearly Visit to the Root Institute 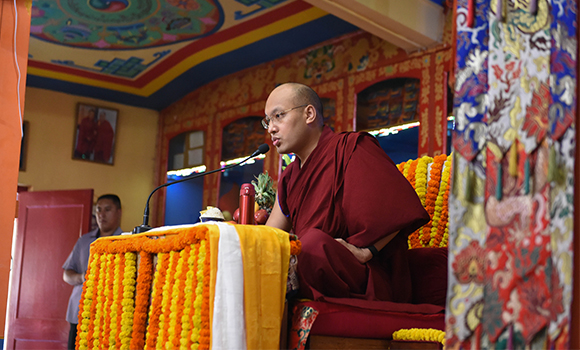 15 March, 2016 -Bodh Gaya, India
Noting that he had been coming to Root Institute for many years, the Gyalwang Karmapa greeted everyone warmly and said that it would be good to have a question and answer session.

Question: Your Holiness, Sometimes when you do a lot of practice, you get a bit tense. Is it good to give yourself a break for a little while? I just finished prostrations and want to take a break before Dorje Sempa.
The Karmapa: In general, it is said that our way of practicing should not be too loose or too tight, just like the strings on a guitar. Since neither extreme would work well, we need to find the golden mean. If we try too hard, that is a fault; if we do not try enough, we are lost in laziness. Sometimes, our mind can get a bit tired out, and so taking a break is fine.

Question: Tibetan Buddhism has spread widely in the last five decades or so, but perhaps not so deeply. Do you think this next generation of teachers needs to take a new approach? Because we have reached a critical point in the world in terms of ecology, violence, and so forth.

The Karmapa: If you look into Google searches for the word Buddhism, you’ll find that the numbers have gone down; whereas the numbers for mindfulness and meditation have gone up. This indicates that the enthusiasm for Buddhism as a religion has decreased, but the interest in what it teaches has increased. The source of mindfulness and numerous meditation practices is Buddhism; however, these have been come detached from their source and commercialized. On the other hand, these practices have opened opportunities for more people to study and learn.

That said, there is a danger of diminishing, or even losing, the value and standards of Buddhism as taught in its scriptures. The Dharma has become fashionable as an aid to alleviate mental problems, but this has only a short-term effect. The long-term goals, liberation or omniscience, as traditionally described are in danger of disappearing.

To respond directly to your question, these days from within Buddhism, it is the practical applications that are important. There is a lot of philosophy in Buddhism, but it is difficult for philosophy alone to help us in the urgent situations, which you mentioned, such as the environment. Greed, the habit of wanting more and more, needs to be controlled but here philosophy will not benefit much, though it can help to set the values we have in this life. What we actually need are practical methods and here Buddhism has vast experience of the mind and how it works—how it moves and how it settles. Especially within Tibetan Buddhism, there is nothing that is not included in terms of practical methods. In our modern times, these can be very useful to train our minds.

Question: I’ve been looking at the Geluk and the Kagyu traditions in terms of their understanding of wisdom (ye shes). In the Geluk tradition it is said that we do not have it until we have entered the path, whereas in the Kagyu tradition, it’s called “primordial wisdom,” and we already have it. Are these completely different perspectives?

The Karmapa: In the Kagyu tradition, the practice of mahamudra is presented in three aspects: sutric mahamudra, tantric mahamudra, and essential mahamudra. The treatise that is the source for sutric mahamudra is known as Maitreya’s Supreme Continuum or (Ratnagotra Vibaga). Here we find the term “the naturally present potential” (rang gzhin gnas rigs). The Kagyu understand it to be present in all living beings and give it the name “wisdom” whereas the Gelukpa understand it to be emptiness itself. The Kagyu see this naturally abiding potential as the subject, wisdom, and the Geluk see it as the object, emptiness, whence the differences in their understandings.

The difference is also due to dissimilar ways of interpreting the second and third Turnings of the Wheel of Dharma. Chandrakirti’s Entering the Middle Way presents the second Turning as definitive and the first and third Turnings as expedient; however, there are also those who describe the third Turning as the definitive one. They explain that the name wisdom was given to Buddha nature (bde gshegs snying po or sugatagarbha). In the Sutra of the Lion’s Roar, buddha nature is explicitly taught as wisdom.
In China there was a philosophical school called the Buddha Nature School, which did not exist in Tibet. One does find in Tibet similar views, such as the Shentong (empty of other) School, the Jonangpas, and some of the Kagyupa, who define the third Turning as definitive, describe buddha nature as wisdom, and speak often of mind’s luminous nature. Therefore, these differences of interpretation and diverse approaches to the Turnings of the Wheels of Dharma have created different understandings of wisdom.

Question: These days in the West, it’s difficult to establish a personal relationship with a teacher as students did in the past. What should we do?

The Karmapa: It is true that in the old days in Tibet, students would gather around a lama in one place and spend a long time together. Since it was not the 21st century with its long hours of work, the Tibetans could stay as long as they wished. If a lama was well-known, there might thousands or tens of thousands of students around him, but I doubt they all could have a personal contact with him. It was not like today when lamas are expected to take care of a student’s place to live, their food, and so forth. Back then a student came to the lama and received oral instruction; then they went out to practice and returned to report on their experience. The lama would evaluate their situation and then give advice and instruction. If student had obstacles, the lama would explain what to do. I think these close relationships, however, were more for special students.
These days what is most difficult for practice are all the distractions, which make it increasingly hard to bring one’s mind together and be focused. In our culture of things, we are constantly pulled in different directions and busyness takes over. To practice well, we need to have a stable and continuous engagement, but all the distractions work against this. The biggest difficulty we have is not letting ourselves be overly influenced by external distractions. It is important to look into this and consider its implications.
Question: Since chanting and mantra are a big part of practice, how can one make the Dharma available to people who are deaf and have never heard a sound?

The Karmapa: I have thought about this before and wondered what could be done for people who do not hear and are using sign language. The benefits of practicing mantras and practicing mudras are similar, so you could show them mudras and explain them. This way they can connect with mental peace and the Secret Mantrayana, and a special feeling could arise though their practice.

After the dedication of merit, the Karmapa left the intimate shrine hall and paused on his way home to feed a gaily decorated elephant, considered an auspicious sign and one of the precious offerings in the traditional mandala practice.