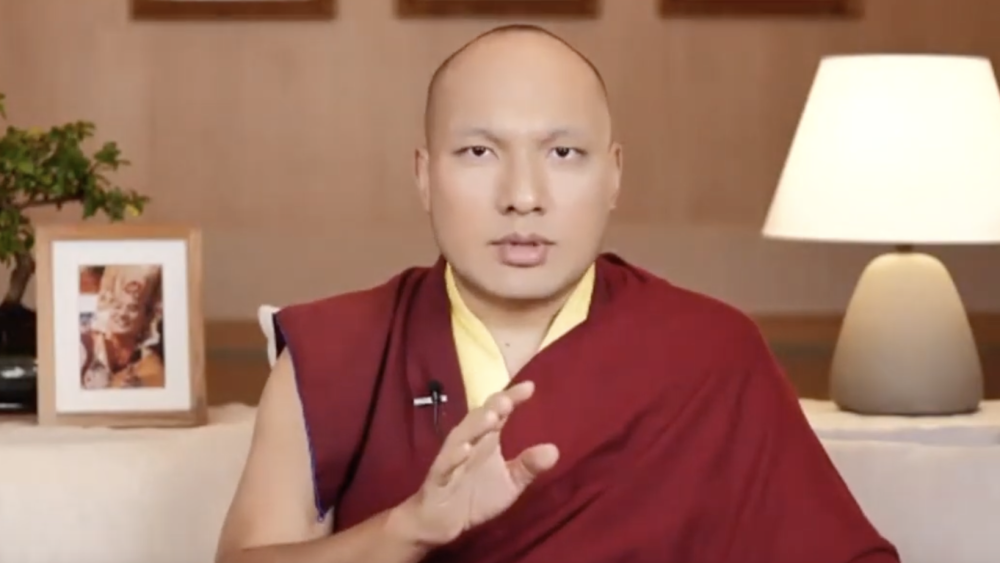 My voice is locked. I’m not sure if I’ve got much to say, I’m losing my voice. I’ve been spending a month teaching, and so I really don’t feel like I have much to say. In general, in the current situation, it is not easy for me to go to India, as you all know. All of you members of the sangha and the monasteries in India know that when I was in India, I had many difficulties. It was very difficult for me to travel, no matter where I wanted to go. Even if I wanted to go up to Dharamsala, I had to ask for permission. Later the situation improved a little, but at the very beginning, it was very difficult for me. And so, for these reasons, I had some problems. In addition, while I was in India, there were many people coming for audiences and a whole lot of other work, so I did not have the time to read texts and research the way that I can now.

Consequently, being abroad for me is actually an opportunity because I can read texts, and I also have the chance to compose texts. In the future, when I become busy again, it will be difficult to get such an opportunity again. So, for this reason, if we were to say that I am taking adversity as the path, it’s rather too bold a way to say it, but I have been taking the opportunity I now have to do whatever I can, to study texts, and to teach the winter teachings, spring teachings, and summer teachings to the best of my ability. And I think that doing this is very important. I’d like to continue to see if we can improve, and make it even better than before, and more complete. So, this is my hope.

I said that I’d be teaching about the “History of the Secret Mantra” during the Mar Ngok Summer teachings, but I haven’t even reached the Mahayana tradition yet, and it’s taken a long time so far. I’m not even sure whether we will even get to the Mahayana next year, because, whenever I start to explain anything, it ends up being an awful lot to say. I usually begin by thinking, “I’m not going to say too much”, then I think, “Oh I should talk about this, and I should say something about that…” I see all these things as having a real point to them. But then, when I include it all, it takes a very long time, and it seems I’ll have to take ten years to speak about the history of mantra! But in any case—the topic I want to speak about is the secret mantra, there’s been no change in that, it’s just that we haven’t reached the mantra yet. I’m very conscious of this whenever I look at the title of the teachings, “The Origins of the Secret Mantra,” because it’s been two years, and I haven’t spoken about the origins of mantra yet! So, this feels a little bit uncomfortable, but there’s nothing to be done. That’s how it is.

Actually, these days we have the summer, winter, and spring teachings, but I thought it might be good to have a bit more teaching. It would be nice, for example, to hold some shorter teachings on particular topics for specific monasteries and nunneries. I have thought of doing this but giving teachings is demanding on my brain and my body—they get tired. For example, I haven’t been feeling so well. Today I’m feeling a bit better, as I’ve done a little bit of exercise. In the past, during the Arya Kshema spring teachings, I didn’t feel well at all, and by the end of the spring teachings, it took me about a month to recover. I had high blood pressure and headaches, and so forth. It all felt very strange, and then a month later, I caught Covid-19, and it took three or four weeks to recover from that. So sometimes I do think I ought to do more teachings, but if there were to be too many teachings, I’m not sure whether it would have a good outcome.

As I said, I have considered doing a few short teachings on particular topics for specific monasteries. I do have the wish that I could give such teachings, but my body is made of flesh and blood—it’s not a machine, it’s not technology. It’s made out of flesh and blood, and so I have to do what it allows me to do, if I use it too much—it doesn’t work well. So that’s how it is.

Composing the Shakyamuni puja took me a little bit of time, and I was writing a good bit of it in my free time during the teachings. Within the Karma Kamtsang, we have very few Shakyamuni pujas, though we have a lot of rituals for other deities, the peaceful and wrathful deities, with many related teachings, but we don’t have any teachings for the Shakyamuni puja.

However, there are times when we have to do pujas for Shakyamuni Buddha, because circumstances have changed and these days there are many times when we have to gather together with other Buddhist traditions. In such a context, if we were to do things with the peaceful and wrathful deities, then sometimes it might feel uncomfortable.

So, for that reason, it would be good to have a Shakyamuni puja. It’s not something that I just made up. In the Kadampa tradition, there were four main meditational deities, and one of them was Shakyamuni Buddha. There are long instructions for this preserved in the “Treasury of Precious Instructions,” by Jamyang Kongtrul Lodrö Thaye. He used these as the basis of the teachings. And another point, I think that it’s unnecessary to mention how kind to us the Teacher Buddha Shakyamuni has been—and speaking about the teachings, one should know that—the reason we have the Buddhist teachings is because of the great kindness of the Buddha Shakyamuni. All of us Buddhists should feel gratitude and remember the Buddha with gratitude. Even if we don’t remember anyone else, we need to remember the Buddha with gratitude, and if we can’t think of the Buddha with gratitude, then we’re faking it when we say that we’re Buddhists.

So for these reasons, I have written this Shakyamuni puja and these praises. There are the “One Hundred and Fifty Verses of Praise”, written by the Indian Master, Mātṛeceta, and they are extremely well-known in India. Whenever anyone went forth, once they took the novice vows, they had to memorize these praises. This was during the time when the teachings flourished in India. The “One Hundred and Fifty Verses” was translated into Tibetan but is not at all well-known. It’s nowhere near as well-known in Tibet as it was in India, other than a few quotations that are given in “The Teachings on the Stages of the Path.” I don’t know whether it’s because the translation wasn’t good, or if there was some other reason. It’s an incredibly important praise, and yet it isn’t well-known.

And so, I have tried to condense a fair amount of the meaning of the “One Hundred and Fifty Praises” and make them easier to understand—and it’s with that intention I wrote these praises—my hope is that this will help us to recall the qualities of the Buddha. So that is all have to say, I shouldn’t say too much.

I would like to thank Khenpo Rinpoche Gyaltsen Phuntsok. He expressed things very well, and so for this reason, as Khen Rinpoche said, “In the future I would like to continue.”

And (it is my hope) that the Mar Ngok Teachings turn out well, and that we will be able to restore all the teachings of the thirteen tantras and mantra, including the ones that have not yet been revived. In any case, at least “The Fifty Verses of the Guru,” and then “The Ocean of Means,” and so forth. So, I thought I should teach some of the tantras. This is my hope.

Thank you very much, I will leave it there. I don’t have much breath left, thank you.