The Gyalwang Karmapa Reaches Out to Displaced Children 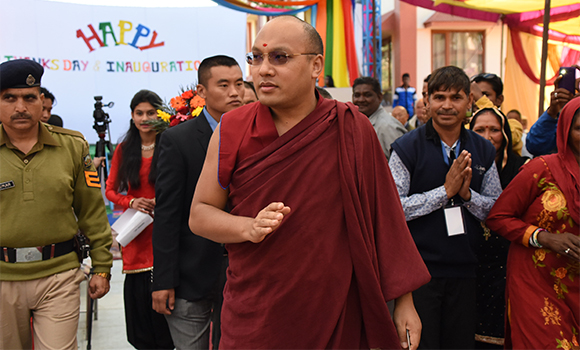 On this brilliant and crisp autumn day, the Gyalwang Karmapa was invited to be the chief guest at the 11th Thanksgiving Day of Tong-len Charitable Trust and also to inaugurate its new building. Situated on the forested ridge of a valley below Dharamsala, the Trust’s major project is to provide health care and education to the children of the nearby Charan slum camp. Tong-len (tong meaning “to give to others” and len, the empathy that wishes to alleviate their suffering) was started in 2004 by Lobsang Jamyang, a Tibetan monk who felt a special sympathy for the young children of the camp, who affectionately call him Guruji. He started out helping 10 children and now their number has grown to 250.

When the Karmapa arrived at Tong-len, he was greeted with the traditional white scarves and escorted to the new building that houses dormitories, a leadership training space, and an interfaith room. Inaugurating it, he cut the decoration across the front door and offered golden flowers. Stepping around the four-petaled flower in bright colors on the lobby floor, he walked up the stairs to the interfaith room, which he specially blessed. On the room’s central wall is a spacious bodhi tree with heart-shaped leaves holding the symbols of the world’s major religions. Another wall is decorated with a statement created by the children together: “The objective of interfaith dialogue is to bring religions together to work in harmony, to live in peace and tolerance respecting each other’s views and beliefs, and to show compassion to all.”

Next to the new building, in front of a big tent for the local audience and visitors from abroad, a stage had been prepared with large swaths of radiantly colored cloths which gently billowed in the morning breeze. To the lower left of the stage stood a shrine with images of HH the Dalai Lama and Sarasvati, the goddess of learning and culture for both Hindus and Buddhists. The Karmapa, along with two other guests, lit an offering lamp to begin the ceremony. After a speech by the founding monk and director, Lobsang Jamyang, the Karmapa was invited onto the stage to give a talk.

He began by noting that after eleven years of study, some of the students have been able to enroll at universities, which delights and inspires everyone. The Karmapa expressed his thanks to “the parents who gave their children a chance to learn by sending them to school. Education brings them a real benefit they can use their whole lives. I would also like to thank the students,” he said, “who took advantage of this opportunity and achieved the good results we can see here today.” He encouraged them to keep up their efforts and not lose heart.

Through their experience with Tong-len, the Karmapa remarked, both parents and children can develop the sense that they are similar to others. He observed, “The children can study and not only that, they are also motivated to become good people with strong inner values and the wish to help others. The desire is to help not just one person but many, especially those who come from a similar underprivileged background.” The Karmapa emphasized, “Developing compassion and loving-kindness is the main goal of the Tong-len Charitable Trust, and actually the goal of us all.” He thanked everyone who supported Tong-len—the parents, sponsors, teachers, and staff—and encouraged them all to continue their important work.

The Karmapa then praised the founder Lobsang Jamyang for his dedication. “In the beginning he went through great hardships when the only support he had was his altruistic motivation and strong sense of purpose.” The Karmapa paid tribute to him as “an inspiring Tibetan, who is practicing Buddhism, and in particular, the path of a true bodhisattva. He is a fine role model for us all.”

In closing the Karmapa remarked, “The Tibetans have been fortunate in enjoying the kindness of India for over fifty years. It is important that one of us Tibetans is returning that kindness and showing our gratitude to the Indian people, and especially the displaced communities, by supporting and serving them.” The Karmapa expressed the wish that in the future more Tibetans would come forth to start projects like Tong-len to benefit their host country and its people. With this encouragement to follow the path of a bodhisattva, the Karmapa ended his talk to the Tong-len community.

Afterward, on behalf of organization, he presented the Tong-len Awards to three people: Tsering Dolkar, who helps all the Tibetans who come to Chandigrah for medical attention; the leader of the Jagori Charitable Trust working to help women and build an equitable society; and to Mario Fontano whose foundation funded the new building.