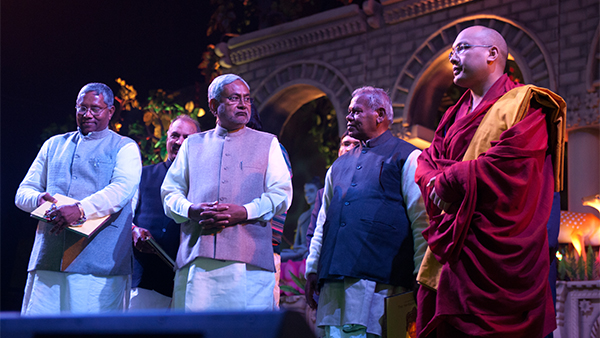 The Gyalwang Karmapa participated today in the opening of the Bodh Mahotsava 2014, a three-day cultural festival commemorating the 2,600th anniversary of Buddha Shakyamuni’s enlightenment here in Bodhgaya.

Chief Minister of Bihar, Mr Nitish Kumar, welcomed His Holiness the Gyalwang Karmapa and saluted tourists and pilgrims from all over the world for their presence in large numbers in the city of enlightenment.

He then lauded the constant improvement in the Mahotsava format and the increasing level of participation of cultural troupes from abroad to make it a truly international event.

Bodh Mahotsava, the much-awaited cultural event jointly organised by the tourism department of the state government and the district administration, began on a positive note on Tuesday evening with the organizers offering the right mix of Indian and foreign cultural menu. The annual event that began in 1998 aims at promoting religious tourism and pilgrimage in the land of Buddha’s enlightenment.

This year the event coincides with Basant Panchami signaling the arrival of the moderate spring season. Spring season and the Buddha’s teachings have at least one thing in common, and that is moderation and absence of extremism in thought, action as well as environment.

Performing artists from Sri Lanka, Thailand, Tibet, Bhutan, Myanmar and South Korea made presentations of their popular culture on stage.

The event, held on the Kalachakra grounds, attracted over 8,000 people, including representatives of various embassies, national delegates and local attendees.