February 6, 2017 – Monlam Pavilion, Bodh Gaya, India
When the Karmapa discussed the special event of the Grand Empowerment of Chakrasamvara during the Winter Debates, he explained, “Usually I do not give many empowerments, only two or three a year, and a grand empowerment from the unexcelled yoga tantra I have only given once before in this lifetime. It was when Tenga Rinpoche was still with us, and he assisted me in giving the vase empowerment from this same Great Empowerment of Chakrasamvara.”

The Karmapa confessed, there were no plans to give this empowerment, but “This year the teachings from the Torch of True Meaning are on Guru Yoga and in conjunction with it, I had planned to teach the Four Session Guru Yoga. Then I newly received instructions from past lamas on the Four Session Guru Yoga, so I took the opportunity to publish the instruction manuals and then had no choice but to give this great empowerment as well. It is very precious and since I’m reluctant to give them, you should not expect to receive great empowerments from me in the future.”

“In general it is not easy to receive these great empowerments,” he continued. “Some people come to me and want to make a Dharma connection through the Secret Mantra Vajrayana, so they ask for this one. When I give this, however, I am not thinking of other people making a Dharma connection with me, but rather that Chakrasamvara is the main yidam for the Karma Kamtsang, and for all Kagyu lineages actually. He is also one of the five sets of five great deities in the practices from the First Karmapa, Dusum Khyenpa.

“The main Kamtsang practice, of course, is Vajra Varahi but this is a very restricted practice and the empowerment should not be given lightly. The Chakrasamvara empowerment is not so restricted, so I thought if we made a Dharma connection through this, it would link to the practice of all the previous Karmapas since I carry the name of the Karmapa. It is also a good way to make a connection with the Secret Mantra Vajrayana, so it is an important occasion.”
“There is one problem, however,” the Karmapa cautioned. “To receive the empowerment, you must make the commitment to do the Four Session Guru Yoga, which is the main guru yoga in the Karma Kamtsang tradition. You could also do any other guru yoga, as each tradition has its guru yoga, such as the Six Session Guru Yoga of the Geluk tradition. Whichever one of them you may choose, the commitment is to do a guru yoga practice every day for the rest of your life.”

With such a big commitment, he remarked, some people might worry, “I don’t know if I can do this practice every day until I die.” However, the Karmapa said, “One should consider it carefully, seeing that there is a great purpose to this special opportunity.”
In conclusion, the Karmapa explained that he will not be giving the complete four empowerments nor that of the vajra master, which makes it easier since there will be no commitments for mantra repetition or other vows. Of course, there will be the bodhisattva vow and some small samaya commitments, but there is no need to worry about the fourteen root downfalls or mantra recitation.

The actual empowerment stretched out over three days, one for the land ceremony, another for the preparations, and finally the actual empowerment. In general, the land ceremony requests permission to use the area for bestowing the empowerment. Within our world there are many unseen beings and one type is known as holders of the land. Before an empowerment can be given, it is important to request their permission to have the land for this ceremony and not create obstacles. To that end they are praised and given copious offerings, both actual in the form of tormas and other substances as well as visualized on a vast scale and in shapes that are appealing to them.

This ceremony took place on sixth of February in the Monlam Pavilion. In the quiet of morning, monks and nuns stood around in small groups waiting for the Gyalwang Karmapa to arrive. Rays of the early morning sun turned the floor of the Monlam Pavilion into swaths of gold. The stage had been especially prepared for the occasion with the Karmapa’s throne on the east side of a square made up of cushions and tables. In the other three directions there were twenty-four lamas who had just finished three-year retreat plus their retreat master and the young Drupon Rinpoche who sat in the leading position. Placed in the middle of this square is the green colored, square-shaped base for the sand mandala of Chakrasamvara, which will serve as the foundation for the shrine. In the bare mandala’s center is a large white offering torma (sculpture) whose delicately sculpted ornamental flowers in a rainbow of colors face the Karmapa.

Behind his throne is placed a screen painted with the kings of the four directions who function as protectors. After the Karmapa arrived and took his seat, the ceremony began. During the ceremony, His Holiness had blessed colored grains ground from precious stones. Once the final offerings were made from the mandala base and the Karmapa had departed, these grains and the mandala base were carried to another room where monks worked in secret for long hours to create the mandala. They mixed the blessed grains with finer ones that are easier to handle, and when the outline was drawn in ink on the basis, they began the process of creating the mandala. This palace of the deity was then brought to the shrine and placed in its center. The golden pavilion with its upturned roof and opened doors was placed over the mandala.

Offerings lined the front of the shrine and right behind them were the two vases representing Chakrasamvara and Vajra Varahi. On the far side was arranged a large deity torma and right behind it, a thangka of Chakrasamvara. On the shelves outside in the four directions were placed the substances needed for the preparatory initiation on the following day: kusha grass for dreaming, red cords to prevent obstacles, the multicolored lotus and tooth cleaning sticks to divine what siddhis would come to each person, and water from a white conch shell to purify the participants’ body, speech, and mind. Thus on the first day, everything had been prepared with the utmost care, beauty, and attention to detail so that all would go well for the next two days of ceremonies. 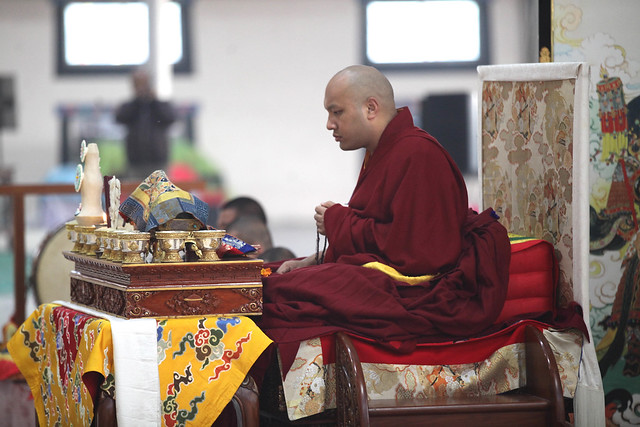