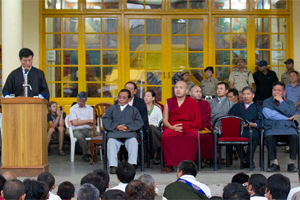 On the day of commemorating his first year in office as the elected head of the Tibetan people, Kalon Tripa Dr Lobsang Sangay and his cabinet colleagues had an official ceremony. His Holiness Karmapa was requested to be the chief guest of the ceremony that was held at Tsuglag khang Mcleodganj.
Prior to the ceremonial speech, Central Tibetan Administration has organised a public prayer service in solidarity with the critical situation inside Tibet at the Tsug-la Khang, the main temple.
His Holiness the Gyalwang Karmapa presided over the prayer session that was attended by officials of the exile administration and thousands of Tibetans and supporters.
Dr Sangay in his public address following the prayer session reiterated the 14th Kashag’s guiding principles of “unity, innovation and self-reliance,” and paid tribute to the hard work and dedication of the elder generations.
Earlier in the morning, His Holiness opened the new Tsuphu Bookstore that is located near to Gyuto Monastery at Sidhbari. The Tsurphu Bookstore aims to collect all the dharma teachings and art of His Holiness the Gyalwang Karmapa.