“The Greatness of Small Acts”: Gyalwang Karmapa Interacts with Students at the University of Delhi 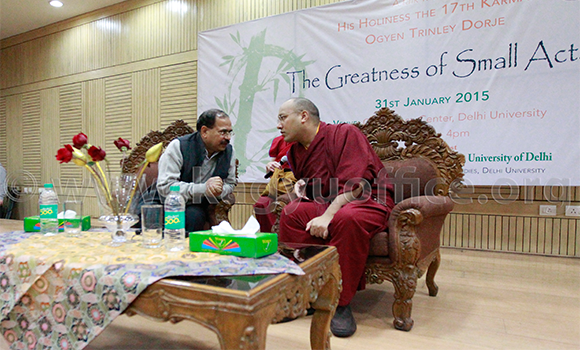 This afternoon the Gyalwang Karmapa made his first ever visit to the University of Delhi, where he interacted with students and faculty primarily from the Department of Buddhist Studies and spoke on ‘The Greatness of Small Acts’.

He was warmly welcomed to the university with a traditional Tibetan white silk scarf and bouquet of flowers by Professor Jain Khurana, Dean of Student Welfare and Professor Hira Paul Gangnegi, Head of the Department of Buddhist Studies.

The Karmapa appeared relaxed and lighthearted, joking with the students that he didn’t really think he could teach them much.

“I’ve had several opportunities to meet with students and we’ve had a wonderful chance to share experiences and ideas,” he said. “Sometimes the way I feel after these events is that I have so much to learn from hearing about your experiences and education, that in the end I get more out of it than you do!”

Over past years the Karmapa has held a series of sustained interactions with university students and youth from different parts of the world to discuss such topics as sustainable development, gender issues and food justice. He is similarly seeking opportunities for such engagements with Indian youth.

The gathering took place at the university’s state-of-the-art Conference Centre, with the Gyalwang Karmapa seated before the students on an elaborately carved wooden chair in the modern, wood-paneled hall. With a selected audience of postgraduate students in attendance, this created a more intimate atmosphere resembling a masterclass or a close family gathering.

“Since I have the position of being a religious leader,” the Karmapa began, “most people immediately think I’m going to be speaking about something connected with religion. But that’s not really where my main interest lies. Instead, whether we’re religious people or don’t have faith in any religion, we’re all the same in being human. We’re all the same in experiencing pleasures and pain, and in being sentient beings, and that is what I consider most important.”

“When we face difficulties and problems,” he continued, “where does our power to deal with them come from? I feel it is from our education and the efforts we ourselves put into it. Only then do we develop the capability to deal with the difficulties of life. But in terms of Buddhist methods, we have the innate potential and ability in our mind. Our virtuous motivation, our love and affection for others, and our altruistic thoughts—such as the wish to benefit others—have all been planted deeply within us. I think the ability comes out of those seeds.

“Therefore, the powers of virtue are like a seed. From a seed a flower can grow. But when you plant a seed you need to take care of it. You need to provide all that it needs, and remove all the things that would inhibit its growth. It is a question of being patient and diligent in growing the seed. Similarly, we have innate compassion present within our minds and it’s important for us to nurture that so that it does not weaken, but instead actually increases.”

The Gyalwang Karmapa then described the process that starts with a thought in our mind, which leads us to say things orally. Through that we then express ourselves physically and act with our body. The actions we perform with our body will then have an effect on our human life, and on society. All of this comes about because of the thoughts and motivations in our mind, so we must pay especially close attention to these.

The Karmapa summarized that when we’re looking at the topic of the greatness of small acts, this is really talking about the greatness and benefits of the motivations that we have in our minds, and how from one small act we can have a great effect.

Next he fielded around eight questions from the students, preferring to explore some of their own ideas rather than simply continue talking himself. One of the first questions asked whether the Karmapa might reincarnate as a woman in his next life.

“I’m asked about this frequently, but actually I really don’t think this is such a big question,” he began. “The reason is that for the benefit of sentient beings, bodhisattvas will take birth and emanate many different forms—males, females, or whatever sort of form. It’s possible that a bodhisattva could appear in any sort of form. It doesn’t really matter.

“But if we look at where this question comes from, it comes from the sexist society we’re in where many people consider men to be superior and women to be inferior. But the way reincarnation works in Buddhism is that of course it can happen. Bodhisattvas can incarnate themselves as men, women, or as anything in order to help sentient beings.

“Now in terms of there being a female reincarnation of the Karmapa, that’s a difficult question for me to answer right now. The Karmapa is a lineage with a 900-year history and I’m still young. I can’t make all these decisions for the future right now, but of course it’s possible.”

In response to another question, on how to stay aware of making small, virtuous acts in our busy and hectic lifestyles, the Gyalwang Karmapa replied that we need to learn how to let our minds relax.

“In the twenty-first century, particularly for urban dwellers, our minds get really hectic and active. We’re unable to let our minds just rest naturally. It’s difficult for us to see the importance of small virtuous acts, or to even experience and feel what we are doing. What is most important for people who live in cities is that we need to learn how to let our minds rest naturally and relax. This is very important.

“We often talk about meditating by following the breath, watching and meditating upon the in-breath and the out-breath. It’s very beneficial to do this. Normally because our minds are so hectic and harried, we’re unable to really pay attention to our breath and hardly even know that we’re breathing. And yet if our breath suddenly stopped we would die.

“When we begin to just watch our breath, if we don’t think much about the future or the past, but just pay attention to the breath that we’re breathing right now and relax our mind within that, then only at that point can we really begin to appreciate our breath and see how important and valuable it really is. And, at that point we begin to get an appreciation of how amazing it is that we are alive and that we’re able to breathe. From that we can also see how important the small things in our surroundings are, and we can begin to appreciate and value the importance of small virtuous acts.

“If we’re walking down the street,” the Karmapa said in response to yet another student, “normally we don’t pay attention to whether we’re stepping on any insects or not. However if we have a virtuous thought and because of that pay attention, for ourselves it’s a small act, but for the insect it’s a matter of life and death. From this perspective our small virtuous act can even become the cause of achieving liberation and omniscience.

“If we think of doing virtue,” he concluded, “it’s not something that’s not already in our life that we then have to bring in extra from outside. It’s doing these small virtues within our everyday human life.”