Entering the Pavilion one was struck by the long tables framing one side of the entrance, laid with hundreds of impressive terra cotta place settings. Tonight’s program was billed as a Grand Garchen Losar Feast and Chakrasamvara Ganachakra. It certainly seemed like a great feast was in store for all.

At 7:30pm the 17th Gyalwang Karmapa took his seat on a low throne on the stage with a medium-sized Buddha statue behind and above him. Stage decorations consisted of a Losar chema arrangement to his right and a large ram’s head and another Losar chema arrangement to his left. The chema arrangements consist of ornate wooden boxes heaped with tsampa (roasted barley flour); fresh stalks of barley, wheat, and other grains; and butter sculpture offerings mounted on gold plaques. These arrangements symbolize prosperity and abundant harvests in the year to come and are standard Losar decorations in monasteries. A row of yellow stage lights beamed down upon the Karmapa, lending an air of majesty to the setting.

The evening’s festivities took place in the context of a ganachakra, a tantric feast. This puja started right away with a ganachakra text written by the Eighth Karmapa Mikyo Dorje. The first part of the text was chanted before the entertainment began.

On either side of the stage, large screens displayed the words of the puja. Then the stage lights shifted from yellow to blue, as the program segued from the puja to the evening’s cultural program.

The central screen displayed a beautiful shot of the Mahabodhi Stupa. Soft music played in the background as a monastic choir filed on to fill the stage. With Khenpo David Karma Choephel conducting, they performed a beautiful song of praise to the Three Jewels that His Holiness the Karmapa had translated from the Chinese.

Afterwards, the two Master of Ceremonies dressed in finery, Ngodrup Tsering and Sherab Tharchin, took the stage to provide the context for the evening’s events and to introduce the performances. Meanwhile, scores of young Indian waiters in uniform white shirts and blue caps issued forth and formed rows to serve the delicious dinner to the audience. This service was carried out in an orderly and timely fashion so that over the course of the next hour, thousands of guests were served a resplendent meal, reminiscent of a five-star hotel dining experience.

Now the entertainment program was in full swing. To justify the inclusion of worldly performances with the spiritual ones, the announcers shared the following quote by the great Tibetan siddha-scholar Karma Chakme:

“When practicing Dharma, the spiritual and worldly views are opposed. When benefiting beings, aside from the difference in intention, the worldly and spiritual are in union.”

Also in the King of Samadhi Sutra, Buddha said:

Always make the best of offerings without compare:
Many types of excellent songs, dance,
Assorted joyful speech, music,
And garlands of lamps and incense.

Understanding the significance of these performances, we will now commence with the cultural programs, seeing them as a great cloud of offerings to please the buddhas.”

Several of these were live performances and others were video performances projected on the two large screens each side of the Monlam stage. These moving spiritual music videos featured recorded footage of the performers singing interspersed with video clips of the 17th Karmapa granting blessings in a variety of settings, such as during large empowerments.

At last, the time had come for the evening to wind down. This night of extraordinary enjoyments concluded with the ending verses of the Chakrasamvara Feast puja, followed by prayers of dedication and auspiciousness, after which, devotees streamed out of the Pavilion with happy hearts and full stomachs. 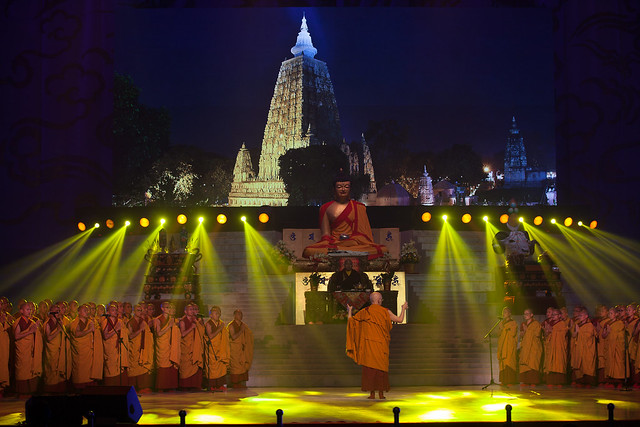