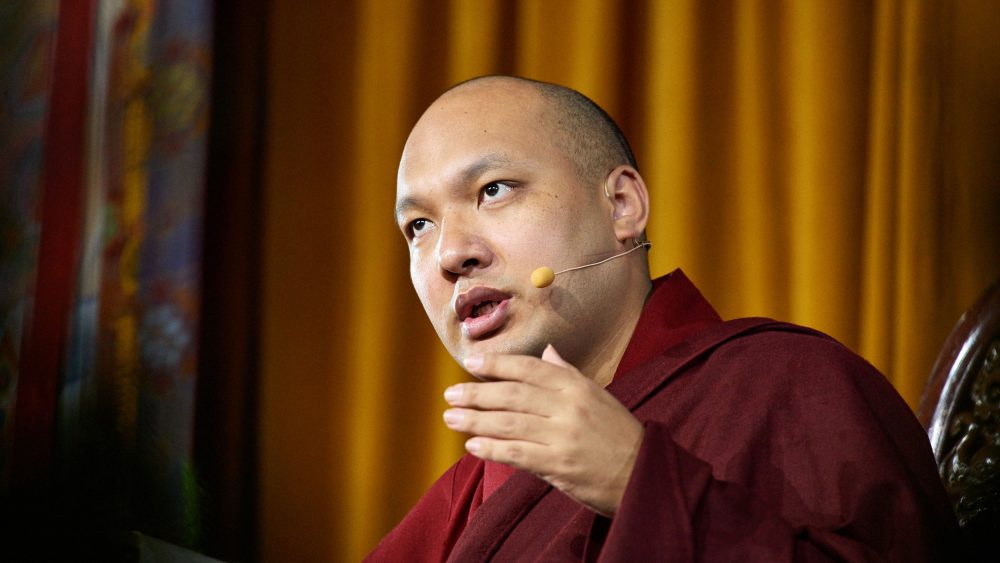 The Challenges of Practice

Today’s morning teachings began with the fourth verse from the Eight Verses for Training the Mind:

Whenever I see beings of ill character
Weighed down by harsh misdeeds and suffering,
As if I had discovered a treasury of precious jewels,
May I cherish them as something difficult to find.

The practice taught by this verse, the Karmapa commented, entails relating to three types of people: those with a negative or horrible character, those weighed down by significant misdeeds, and those experiencing severe suffering. “The first type,” the Karmapa explained, “refers to people whose minds are overwhelmed by powerful disturbing emotions that cause them to lose their self-control. Their minds are incapacitated by their afflictions, such as pride, aggression, or jealousy. It is possible that a family member fits into this category, behaving in erratic ways or becoming irritable and angry. They might be a good person most of time but in their worst moments, they are overcome by negative emotions, which can be worsened by conditions such as alcohol.”

We could encounter similar situations with other people, the Karmapa remarked, even with a teacher, who is not a completely bad person—we cannot say they have no Dharma or that we cannot learn from them—but they may have issues with their personalities. Marpa, for example, had a rough temperament from a young age. His father was worried about him, afraid that he might kill someone or be killed himself. And if we were honest, we would have to say that we would not have been able to tolerate the kind of treatment he gave Milarepa. In our lives we must learn to put up with a variety of character traits and behavior.

The second type of individual we should cherish is one involved in severe misdeeds; for example, someone who has killed many people with explosives. These days, we see violence in many places on our planet. If we look closely at the perpetrators, we can see the anger, malicious intent, and jealousy that fill their mind. They are not in control of themselves but lost to their negative emotions. For this reason, the verse encourages us to cherish them as objects of our compassion.

“The final category of individuals,” the Karmapa explained, “are those are weighed down by extreme forms of suffering, facing painful situations or serious illnesses. Our normal reaction upon seeing them is to disassociate; our minds want to avoid bearing witness to such misery, since it is so difficult to bear. We do not know what to see or do, so we avoid contact. This kind of deep suffering can happen to people in our own family as well. On the one hand, we feel great compassion and closeness to the sick family member, and on the other hand, we feel powerless because the suffering is so severe. We do not know what to think or do so instead of being compassionate, our mind tries to escape their suffering.”

“Main point,” His Holiness summarized,” is that on the path of the bodhisattva when we are helping others, we will connect with a wide variety of people. Encountering any of these three types, we might try to steer clear of them. Without habit of training already in place, it will be difficult to connect with them and squarely face their situation.”

The Karmapa described this avoidance in terms of our experience. “Training in compassion is about shortening the distance we feel between ourselves as the one in a good situation who has compassion and others in a bad situation who are the objects of our compassion. Fully accepting our involvement with people, we rely on the feeling that the two, subject with compassion and object of it, are not separate or different. In fact, when we engender true compassion, we are able to transfer ourselves into the situation of the one for whom we feel compassion and can fully accept their suffering.

If we do not train in this way, then imprisoned in a self-centered mind, we will find excuses not to relate intimately with these three types of people, thinking ‘They will make me feel uncomfortable. I’ll get upset. I just don’t want to face this.’” However, if we analyze these excuses, we will see that they are not authentic reasons to shy away from the misery others experience. Training in compassion helps to diminish the distance we create between ourselves and others.”

When others, out of jealousy,
Scold, insult, and treat me in other unreasonable ways,
May I take such defeat upon myself
And offer victory to others.

“This practice is challenging,” the Karmapa remarked. “Usually when others scold or insult us, we cannot take the blame they heap on us. They point a finger at us and we point a finger elsewhere. We find it difficult to accept that something was really our fault or due to a flaw within us. We become so overwhelmed by an emotional reaction that we are unable to turn our attention inward, and so we look outward, shifting the blame to others.”

The Karmapa continued, “To counteract our evasions, we practice taking defeat upon ourselves and giving victory to others—a famous piece of advice often found in the oral instructions of the Kadampa.” He also warned that this counsel could be misused. The words are heard so often that people can repeat them without thinking. For example, if we simply allow ourselves to be defeated in every situation and think that this is mind training, we would be mistaken in taking the meaning on too literal a level.

“The true intent behind this instruction to give victory to others and take defeat upon ourselves,” the Karmapa explained. “It is not to follow a certain type of behavior; rather, the deeper intent is to direct our attention inward, whenever we are blamed for something even if we have not done anything wrong. The usual reaction is to become angry but the instruction here is to relax and direct our attention inward. Looking carefully at our inner state of mind allows us to respond from a more relaxed place.”

Actually, it is our habit of being self-centered that should take the loss, as the intent of the practice is to reduce our clinging to a self that we take to be real. “If we examine our mind,” the Karmapa instructed, “and find a strong habit of fixation on ourselves, this is the very state of mind we want to pacify or loosen up through mind training. It is our habits of self-centeredness we wish to defeat.”

Verse Six is the following:

Even if someone in whom I have high expectations
From helping in the past
Were to senselessly harm me,
May I regard them as my genuine teacher.

This verse is easy to understand and difficult to practice, the Karmapa noted. “If we have helped someone and expected something in return but they turned on us instead, it would wound us deeply, leaving a mark in our mind. This verse offers a training to prepare us for such suffering. It is not easy to get reality to align with our hopes. There are many times in our lives when what is happening is not living up to our expectations.” The Karmapa offered examples from his life when his expectations were thwarted. At the age of seven, he was told that he was the Karmapa, and he thought that it meant that he would have many toys and playmates. Then when he came to India, he thought he would have the freedom to travel. In both instances, reality did not match his expectations. The Karmapa stated, “If things had gone according to my hopes, this visit to England would have not been the first but preceded by many others.”

“These days,” the Karmapa shared, “I do not have many expectations. I do as much as I can to love others and benefit them. People can remember that there is someone who loves them and take courage from that.” He added, “Even if I cannot benefit others on a grand scale, I still have this heart, this attitude filled with love for others and the wish to help them. For me personally, this is enough and allows me to continue taking steps forward.”