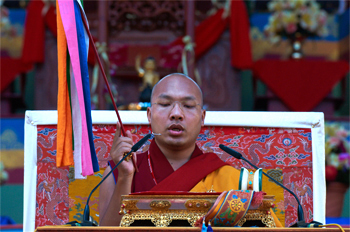 The webcast team was in their places, ready to start broadcasting as Jamgon Kongtrul Rinpoche commenced the Mahayana Sojong vows.

He sat on a cushion facing the assembly and read the vow-taking ritual from a sheet of paper, monks, nuns and laypeople repeating the vows after him.

Dawn broke slowly over the fields of baked earth relieved by clumps of rough grass that surround the pavilion. Prayers from the Mahabodhi stupa 2Km away, broadcast by loudspeaker over the countryside at maximum volume could be all too clearly heard.

The chanting master asked everyone to kneel, and began to recite the refuge vows in Sanskrit; in the background, a chorus of grey mynah birds gained strength.

Gyalwang Karmapa joined the puja after the short break for breakfast, for the chanting of the Twenty Branch Monlam.

His Holiness Gyalwang Karmapa bestowed Akshobhya and Amitabha empowerments on March 5, 2012. Gyalwang Karmapa arrived at the Monlam Pavilion around 9:00 am. After prostrating three times he sat on the throne and put on his black activity hat. After a mandala offering at around 9:15 am, His Holiness gave a brief talk on the history of Buddha Akshobhya.

A picture of Buddha Akshobhya (known as Mitrukpa in Tibetan), a copy of the one painted by His Holiness in 2011, was distributed to all those in attendance. His Holiness told how there was once a bhikku who promised that he would never be angry and not feel hatred to anybody until he reached enlightenment. Buddha then predicted that this bhikku would be called Akshobhya, or unmoving, or that which cannot be disturbed.

He became Bodhisattava Akshobhya, or Buddha Akshobhya, in the spatial Buddhafield where there are no negative activities. According to the teachings of the Buddha Shakyamuni, reciting the Akshobhya mantra will help completely purify negative deeds. His Holiness said that the practice originated from Atisha Dipankara, and was made into one of the Kriya yoga tantras by one of the Shamar Rinpoches.

His Holiness also said that those of us on the Buddhist path need to be broadminded. One should not say that one is Mahayana and that other paths are not good, or insult them, or  be intolerant of them. Dharma is dharma. Such a discriminatory attitude towards others is not good.

His Holiness also explained the meaning of the Sanskrit word “mantra”, which means to protect, i.e. to give protection to the mind. He said that this is something that you have to work on the subtle mind, and it is not about using rituals and religious instruments. The main understanding of the Vajrayana is about our mind. As we have discussed, Vajrayana works to transform our negative vision, or view, and purify how we see things. Because of our strong way of grasping, we see things in a deluded way; we do not see them the way they are.

Gyalwang Karmapa said that, of the many qualities that Buddha possesses, compassion is the most important. As pointed out earlier, Buddha helped others overcome suffering in whatever way possible and always thinks about the welfare of all the sentient beings. He always taught in a way that is best suited to them. For instance, for some people, the concept of selflessness is the most important while for others it is not. Then there are those who need the concept of skillful means. The goal is the same– to be liberated from samsara. Therefore, Buddha taught everybody according to their own particular situation.

At around 9:50 am, His Holiness gave the vase empowerment, after which he gave the crown empowerment.

Finally, a Mandala offering was made to thank for the empowerment.

His Holiness began the Amitabha empowerment at around 10:00 am.

His Holiness said as long as we have negative emotions it is very difficult to be born in the Amitabha realm. However, because of the special dedication of Amitabha, if one really practices and prays to be born in Dewachen (Amitabha Realm) and focuses on Amitabha, than one can be born in Dewachen. His Holiness said that the practice comes from Tulku Mingyur Dorje. When he was young, Tulku Mingyur Dorje had a vision of the Buddha who told him that if you practice Amitabha you will travel straight like an arrow to the Amitabha realm.

Finally, His Holiness said that the main goal of the dharma is to transform and improve our mind, which means to become a better human being. Dharma has to be integrated into life and if one is a true practitioner the dharma and the person are not separate.

Lunch with the sponsors and rinpoches at the Royal Residency Hotel

The Gyalwang Karmapa hosted a lunch for the major sponsors of the 29th Kagyu Monlam at the Royal Residency Hotel, and was accompanied by leading rinpoches.

Private audiences and other duties

Website viewers may sometimes wonder where the Gyalwang Karmapa is. There are days when he only attends one session at the Monlam Pavilion. Yet, each year during the Kagyu Monlam Chenmo he works ceaselessly, rising early and retiring to bed after midnight. Much of the work he does is hidden. Sometimes it involves planning and management meetings or rehearsals of upcoming events.  A major part of his daily schedule is an extensive list of private audiences. These are conducted in his quarters on the roof of Tergar Monastery, usually each afternoon.  During the Monlam, the majority who request audiences belong to groups representative of dharma centres across the world.  Also included, however, are visiting Rinpoches, Khenpos and monks from Kagyu monasteries and shedras world-wide, Rinpoches from other schools of Buddhism, members of the Bhutanese royal family, local Indian dignitaries, Tibetans on pilgrimage from Tibet, and a few fortunate families and  individuals.

The list for this afternoon’s audience, for example, contained nearly 400 names, and the audience ran for nearly three hours.

Rehearsal for the Kangyur and Alms processions

Another aspect of the Gyalwang Karmapa’s tireless efforts to ensure the smooth running of the Monlam are the preparations and rehearsals that he supervises.  Having successfully managed the Karma Pakshi production, he turned his attention to the Kangyur and Alms processions.  At 6.30pm, when most volunteers were relaxing after a hard day’s work, His Holiness gathered all the participants in these two processions together in the Monlam Pavilion to explain exactly what their duties were, to remind them of the correct procedures and modes of behavior expected of them, and to demonstrate personally when necessary, all delivered with his characteristic teasing and playful  humour underscored by seriousness, and the insistence that everything should be done to the best of one’s ability for the benefit of all sentient beings.

He particularly focused on the 103 getsul, novice monks, who will be responsible for handing out and collecting in the pages of the Kangyur which are distributed throughout the congregation during the reading of the Kangyur ceremony.  Eachgetsul is designated by a letter written on a special badge.  Using a map of the pavilion, His Holiness explained which areas each would be responsible for, and lined them up at the end of their allotted rows.