His Holiness the Gyalwang Karmapa offered teachings on Milarepa’s Correctly Expressing the Middle Way, at the request of the Kagyu Relief and Protection Committee of the Central University for Tibetan Studies, in Sarnath. Along with the members of the Kagyu committee, the teachings were attended by students and teachers from the Central University for Higher Tibetan Studies from other lineages as well.

His Holiness began the first day with a presentation of the history of the Kagyu lineages, emphasizing their interconnectedness. His Holiness pointed out that all that is left of many of these once thriving lineages are ruins in Tibet, and expressed his ongoing concern to establish vibrant monasteries in India and elsewhere, to ensure the availability of the teachings in the future.

Building on the introduction to Mahamudra according to the sutra path, His Holiness had conferred, at the Vajra Vidya Institute the previous week, the Mahamudra view in the context of the tantric path. His Holiness delineated the differences in the contexts and purposes served by the Middle Way view and the Other-Empty view of Mahamudra. After conferring the oral transmission of the text, His Holiness commenced his commentary on the text.

On the second afternoon, His Holiness arrived to deliver the teachings straight from a full day’s attendance at the 1st Annual Conference on World Environment, which was hosted at Vajra Vidya at the same time. To an increasingly packed audience, His Holiness delved directly into some of the most complex issues raised in Middle Way philosophy. Outlining the Consequentialist Middle Way stance formulated by Chandrakirti, His Holiness explored its mode of arguing from the perspective of others, while eschewing the claim to have a thesis of its own.

Despite his initial suggestion that his remarks be taken as just casual conversation, during the course of the two afternoons His Holiness presented a virtual “tour de force” of commentary on the Middle Way view.

In conclusion, Khenpo Sogyal expressed thanks and praised HHK in a concluding speech that was clearly as heartfelt as it was extensive. 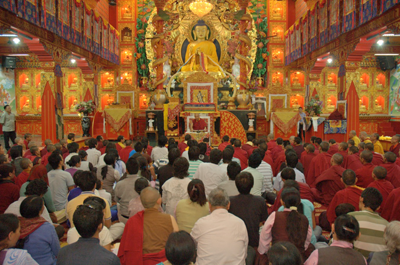