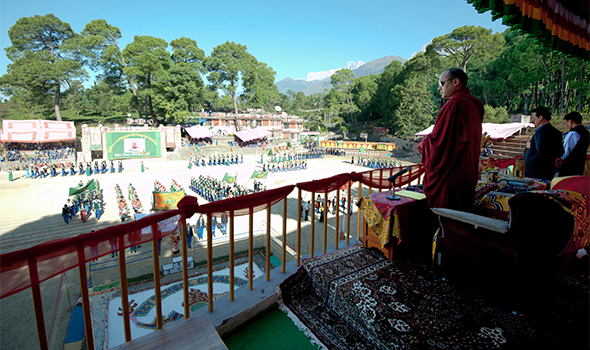 (18 October, 2014 – Gopalpur) His Holiness the Karmapa spent the day as chief guest of the Tibetan SOS Children’s Village in Gopalpur, northern India, during its 16th Annual Sport’s Day. Along with officially inaugurating the daylong event, the Gyalwang Karmapa was requested by the organizers to deliver an address to the students as part of the event’s opening ceremony.

His Holiness the Karmapa recalled that he had already visited the Gopalpur TCV school several times in the past, and expressed his contentment at the current opportunity to continue cultivating his connection to the school. He described the athletic day as a joyful event and added, “sports may appear to be a matter of idle play, but actually it can have significance on many levels.” The inclusion of athletics in the educational curriculum of TCV schools offers an opportunity for students to enhance their physical fitness while engaging in play. This helps ensure that the school experience is enjoyable for students, he observed. Not only within a school or among schools, but “even among nations,” he said, “sporting events serve as a means to come together and enhance relationships.” In this way, the Karmapa noted, sports can even contribute in some measure to world peace.

Wryly noting that lecturing them when they were waiting to engage in playful games was not the most opportune moment for him to speak at any length, the Gyalwang Karmapa observed that His Holiness the Dalai Lama himself had previously visited the school and given many encouraging words of advice, which the Karmapa urged them to keep alive in their minds and put into practice in their daily lives. He encouraged them to make the most of their time at school, and to intensify their courage and determination to achieve their aims in life.

The remainder of the day was filled with the performance of school songs and good-natured exertion in each of the various sports. After a break for lunch, the games continued through the afternoon until the sun began dropping towards the horizon and the time had come for the awarding of trophies to the members of the winning teams. Before he departed for the drive back to Gyuto, His Holiness the Karmapa himself handed the trophies to the tired but exhilarated boys and girls, and the day was declared a success all round.