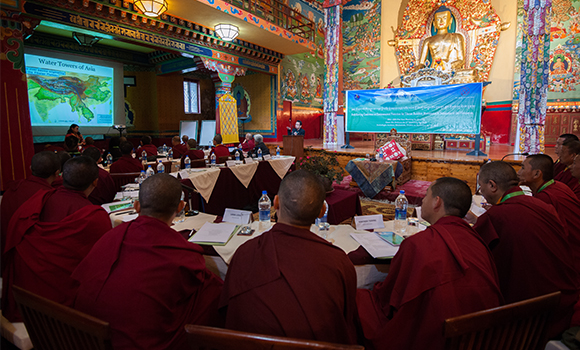 “In order to save the Himalayas and Tibet from the threats of deforestation, climate change, and pollution, we have to be full of courage and believe whole heartedly that this endeavor is winnable. The alternative is unthinkable.”

Khoryug means ‘environment’ in Tibetan and the organization’s sixth conference on Environmental Protection for Tibetan Buddhist Monasteries and Nunneries in the Himalayas has brought together 45 monastic delegates representing monasteries and nunneries in India, Nepal and Bhutan. The goal of the conference is to create the Next Five Year Action Plan for all Khoryug monasteries. A draft of the plan will be presented to the Gyalwang Karmapa when he addresses the conference on the final day.

The delegates will examine the previous five years of projects involving environmental issues such as water and energy conservation, reforestation, waste management and climate change. They will share what projects were most effective and whether the outcomes met the original goals.

Looking to the future the delegates will discuss the following administrative themes for Khoryug in general: Organization, Coordination, Communication, Fundraising and Implementation.

In the past year, three graduate students from Yale and Princeton universities carried out research on the activities of Khoryug monasteries. A group review of the research by the participants will contribute to the upcoming five year strategy of Khoryug.

Khoryug was founded by His Holiness in 2009 to address his heartfelt concerns for the environment and the challenges it faces. Since then the number of participating monasteries and nunneries from various Tibetan Buddhist traditions has grown from 22 to 55. The conference is sponsored by Kun Kyong Charitable Trust.