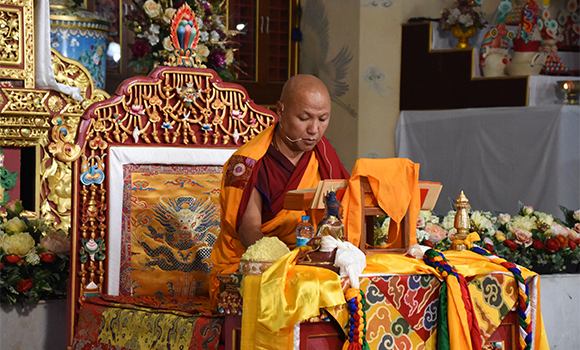 27-29 February, 2016 -Tergar Monastery, Bodhgaya, India
With impeccable concentration and speed, Sangye Nyenpa Rinpoche offered an important reading transmission this week to the monastics gathered for the Kagyu Gunchö Winter Dharma Teachings and Debates for Kagyu Shedras, including HE Jamgon Kongtrul Rinpoche. The transmission was offered over three mornings in the Tergar Shrine.

The text, called Mandala of the Sun, is a commentary on the vinaya written by the 8th Karmapa, Mikyo Dorje. It includes the root text of the vinaya and an annotation on this root text by Tshonawa Chenpo. The text has not yet been translated into English. Since the vinaya is the Buddha’s teachings on monastic vows, the reading transmission was offered only to ordained monks and nuns.

Sangye Nyenpa Rinpoche offered an introduction in Tibetan to the monks and nuns. He expressed his happiness that he could offer the transmission, and that there were so many monastics present from all the Kagyu Shedras to receive it. He also said that the flourishing of the dharma is not just due to a few teachers, but the entire monastic community and their holding of the vows. Therefore, he asked the monastics to put the text into practice and to pass it to future generations.

During the transmission, Sangye Nyenpa Rinpoche read with great speed as well as a sense of ease. He is known as one of the best and most proficient readers in the Karma Kamtsang lineage. It was a phenomenal to listen to his precise pronunciation of the syllables and also to see his eyes scanning quickly across the pages. At times, the Gyalwang Karmapa was quietly present listening as well. On two mornings, the Karmapa walked around the shrine as the discipline master normally does. His presence alone caused everyone present to straighten their backs and their robes.

At the end of the transmission, Sangye Nyenpa Rinpoche offered some words of advice for the monks about implementing the practice of the text. A group of monks, nuns and lay people offered him a mandala, and many monastics came up with katas to make offerings. With humility, Rinpoche came down from his throne to receive an offering from HE Jamgon Kongtrul Rinpoche, and then quietly departed. Afterwards many other monastics went to the throne to make further offerings and to touch their heads to the throne. There was a palpable sense of joy amongst the monastics from having been able to receive the transmission of this precious text.