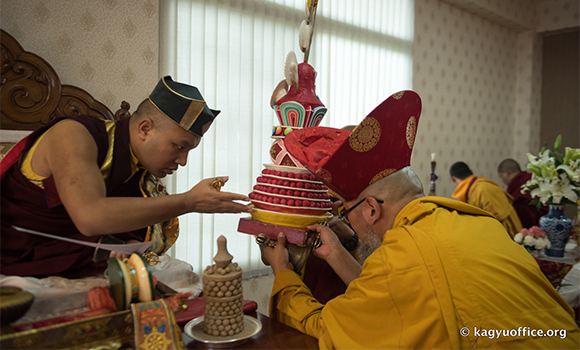 January 29, 2017 – Tergar Monastery, Bodh Gaya, Bihar, India
For the last five days, the first group of three-year retreatants and their retreat master from Yiong Samten Ling—the new retreat center for the Gyalwang Karmapa’s Monastery in Rumtek, Sikkim—have been performing a long-life ceremony for him. The practice, based on the Guhayasamaja Tantra, is a terma revealed by Ratna Lingpa and one of the most popular long-life practices in the Kagyu and Nyingma lineages. Its purpose was to completely pacify any obstacles to the Karmapa’s life and to bring forth the flourishing of his enlightened activity.

On the final day at 8am in the morning, the Karmapa was invited to be present for the practice, which had been taking place in the private temple of the Pavilion for the Kagyu Monlam Chenmo. Taking his seat on the throne and wearing his Activity Hat, the Karmapa participated in the practice with the sixteen monks. At the end the retreatants could offer His Holiness for the first time the representations of body, speech, mind, qualities, and activity. They also made the deep wish that he would be able to return soon to his seat in Rumtek, Sikkim.[Best_Wordpress_Gallery id=”37″ gal_title=”Rumtek Retreatants Offer Long-Life Ceremony to the Gyalwang Karmapa”]