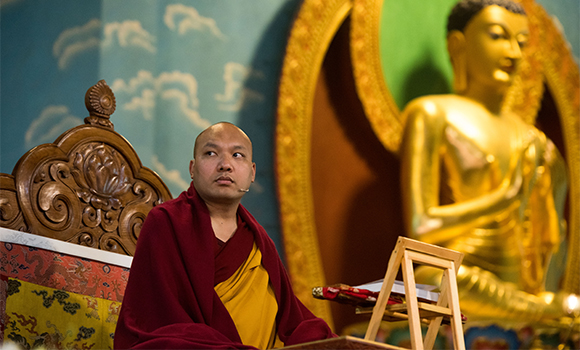 Never Giving Up on Sentient Beings

After a day off for the holiday of Holi, the Karmapa returned to teaching chapter ten on the “Precepts for Generating Aspiring Bodhicitta” from Gampopa’s Ornament of Precious Liberation. The Karmapa focused on the five precepts of aspirational bodhichitta. One of these precepts, never mentally abandoning sentient beings, is the means of guaranteeing that our bodhicitta does not get lost. The Karmapa noted that our achieving the qualities of the Buddha comes down to whether or not we have given up on sentient beings.

The Karmapa drew parallels between the four defeats of the Pratimoksha vows and the loss of the aspirational bodhicitta vow. In the bodhisattva vow, the following are downfalls: (1) With great attachment to gain or respect, we praise ourselves and disparage others. (2) We have the power to assist a sentient being who is suffering, but fail to do so. (3) We continue to speak badly about someone who has made a mistake, and they confess but we lack forgiveness. (4) If we pretend to have a higher view, but do not. These are grave offences of the bodhisattva vow and are analogous to the four defeats.

When we have really strong negative emotions, the four grave offences are performed with great involvement. It is precisely this great involvement that makes these into the four actions analogous to defeats since (1) we do them continually while knowing they are mistakes; (2) we do them with no shame or embarrassment that they are unacceptable; (3) we enjoy doing them; and (4) we view it as being positive. Performing these actions with great involvement becomes the cause for losing the vow of engaged bodhicitta. Such defeats are committed with varying degrees of involvement related to losing the vow. Some say loss of the vow entails the presence of all four actions whereas others say only three must be present.

Other causes for losing the vow include returning the precepts of the vow and developing wrong views. However, in terms of restoring the vow, there are methods for restoration of both aspirational bodhicitta and engaged bodhicitta. The vows of bodhicitta can be restored whereas the pratimoksha vows cannot be restored. A common practice of restoring the vow is three recitations at day and three at night of the Sutra in Three Sections, also known as The Sutra of Confessing and Restoring.

The Karmapa told a humorous anecdote regarding the practice of the reciting this. He said that in the Indian tradition, reciting the Sutra in Three Sections was considered the most powerful purifier. It was only recited when there was a grave misdeed, such as a root downfall of a bodhisattva vow. When Indian people came to Tibet, however, they said Tibet must be fill of terribly wicked people since they recite the Sutra in Three Sections so often.

To further clarify the precept of not abandoning sentient beings, the Karmapa provided the following example. There was a monkey mother and her two children, a son and daughter, who would go into the fields in search of food. The owner of the field would see them there and chase them while throwing sticks and stones. The mother, who favored her son, would carry him on her chest and her daughter on her back as they escaped out of the field. Once the monkey mother reached a tree, she could not climb up with her son on her chest so she dropped him and climbed up the tree. Once she reached the top, she realized he was still at the base of the tree while her daughter was safely on her back. This is what it is like when we try to benefit beings. Just like the monkey mother, in difficult situations, we often run away and leave our bodhichitta (the son) at the base of the tree. While we may have the wish to benefit beings, some urgent situation arises and or something bad happens. At this point, we begin discriminating and forget about other sentient beings.

The Karmapa concluded with the hopeful and joyous news that if the proper signs and conditions manifest, Tenga Rinpoche would be recognized during this Arya Kshema Winter Dharma Gathering. In the case that it does happen, the Arya Kshema will be extended for a couple extra days.