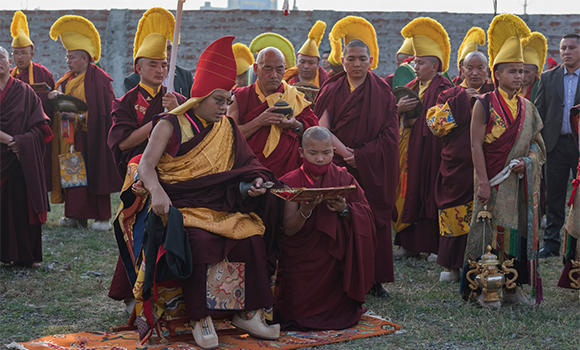 7 February, 2016 -Monlam Pavillion, Bodhgaya
The Gutor Chenmo concluded on the twenty-ninth day of the twelfth Tibetan month, the penultimate day of the Tibetan year, and the day in each Tibetan month which is allocated for Dharmapala practice.

The morning followed the usual pattern of Chakrasamvara self-visualisation followed by torma offerings to Four-armed Mahakala. After lunch everyone gathered back in the pavillion for the concluding rituals of the Gutor. A murmur of surprised delight ran through the auditorium when people spotted that nine-year-old Bokar Rinpoche Yangsi had arrived and taken his seat on stage in the front row. (Jamgon Kongtrul Rinpoche and Gyaltsab Rinpoche were not present because they were leading the lama retreat for the accomplishment of the Practice of Amitayus the Three Roots Combined, in preparation for the long-life offerings at Losar.)

First came a final session of offerings. In accordance with the traditions of the Gutor Chenmo, the Vajra Master, dressed as the Black Hat Lama, was escorted onto the stage to make the Golden Libation offering to the tor-gya.

Then came the expulsion ritual of the great torma which would be the ultimate offering. His Holiness dressed in his red pandit’s hat stood in front of the throne and led the chanting, assisted by Drupon Dechen Rinpoche who held up the text for him.

With great ceremony the tor-gya was lifted on its base and escorted in procession out of the pavillion to a field near the north gate of the pavillion to be burnt. The procession was led by two pairs of monks playing dungchen – long, Tibetan horns. Laymen dressed in chubas, red fringed hats and boots supported the weight of the horns on wooden yokes. They were followed by monks playing Tibetan trumpets and thigh bone trumpets, and monks beating hand-held drums in a steady rhythm.

Meanwhile, from the stage, monks holding cymbals descended into the central aisle. Turning first to the right, then to the left, they clashed their cymbals, making their way along the red carpet in a measured pace, as if in a slow dance. Strips of colourful brocade attached to the backs of their dhagams swayed as they moved. Behind them came more musicians holding aloft green-skinned drums and monks holding texts to be recited during the ritual burning. Then came the tor-gya, swaying slightly as it was carried along by ten monks. These wore stylised maroon velvet caps rather like Nehru hats and had khatags bound across their mouths to prevent their breath falling on the sacred tor-gya.

Behind the tor-gya came the victory banner of Mahakala and then the Black Hat Lama.

Finally, an incense bearer, followed by monks playing gyalin, marked the approach of His Holiness the 17th Karmapa, walking slowly, shadowed by the great golden umbrella which signifies both his kingship and the sheltering power of the Dharma.

They left the Monlam Pavillion and processed down the road to a walled-in field by the north gate of the Monlam site, making offerings along the route in order to ensure the removal of any obstacles along the way.

In the far right corner of this field, a fifteen-foot triangular structure containing straw and dried leaves had been built, with a wide opening to receive the torma.

Facing the torma, the Karmapa and the Vajra Master recited the concluding prayers, the culmination of the previous three days’ rituals: all possible negativities and anything that might harm the teachings or living beings were summoned and dissolved into the torma. The fire was lit, immediately spreading up and down the frame, consuming the dried palm fronds at the top, the loose straw at the bottom, and the torma inside. The Karmapa watched as the flames danced skywards, devouring the structure and the torma, destroying any hindrances and negativities accumulated during the year, and creating an auspicious beginning for the Year of the Fire Monkey.