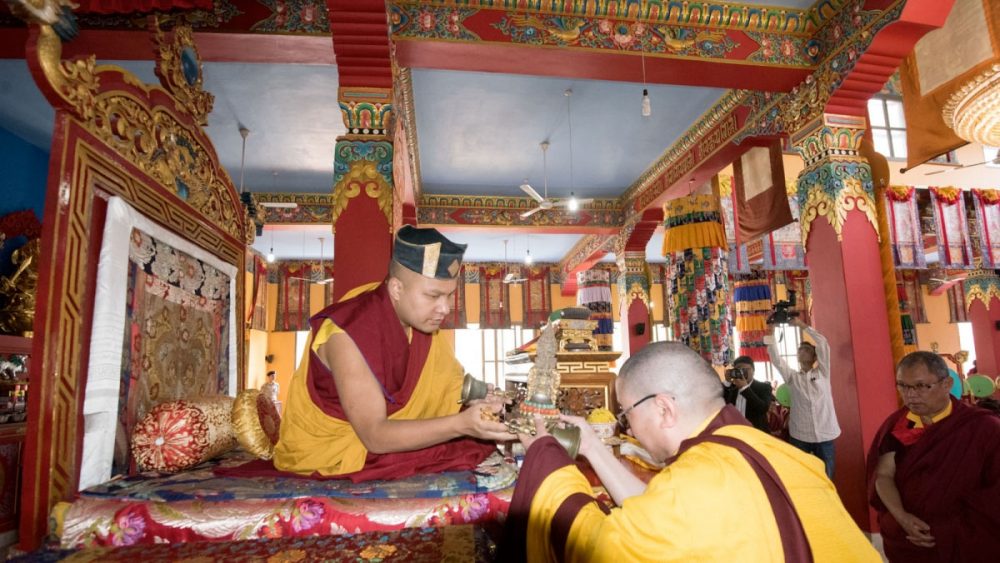 At the request of the Lhatok Gyalyong Association(LGA), the Gyalwang Karmapa traveled from his temporary residence to Khampagar Monastery in Tashi Jong.

His Holiness was welcomed by the Gyalwa Dokhampa (the Ninth Khamtrul Rinpoche), Drugu Chogyal Rinpoche, the Togdens (advanced yogic practitioners), Members of Parliament (CTA),  and ordained and lay people from the Tashi Jong community.

Upon arrival, the Gyalwang Karmapa took his seat on the throne in the  main shrine hall, and Gyalwa Dokhampa Rinpoche offered him a mandala and the representations of body, speech, and mind. The lamas, tulkus and all who had gathered were granted an audience and received blessings from His Holiness. This was followed by  special prayers for his long life, led by the Gyalwa Dokhampa Rinpoche, Ngedon Shedrup Nyima Palsangpo and the Vajralopon of the LGA, and further  extensive mandala offerings.

On behalf of all those living in Lhatok, the LGA offered the Karmapa the merits of life release and saving animals that were to be killed. They planted trees and vowed their determination to protect the environment, nurture its animals and vegetation, and become vegetarian. They also committed to upholding nonviolence and harmonious relationships.

After the ceremonies, the Karmapa and the Gyalwa Dokhampa enjoyed a long leisurely lunch together, sharing their thoughts in a relaxed atmosphere. Before leaving Tashi Jong, the Gyalwang Karmapa stopped to consecrate the new Khampagar Shedra  (monastic college) which is currently under construction.[Best_Wordpress_Gallery id=”41″ gal_title=”2017.04.09 HHK Vist Tashi jong”]