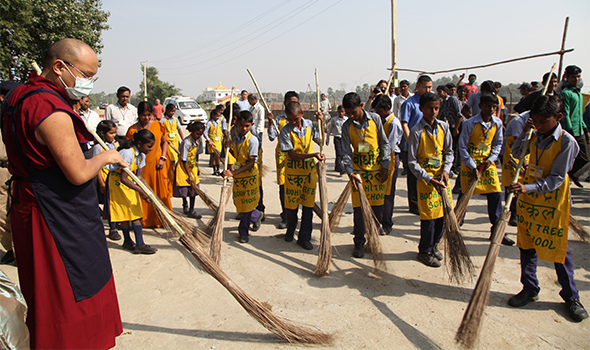 12 November, 2014, Bodhgaya
The Gyalwang Karmapa has often quipped that the word ‘Karmapa’ is somewhat equivalent in meaning to “Action Man”. He is now recognised as a leader who ‘does’ as well as ‘says’, and repeatedly urges his followers to transform their Buddhist beliefs into action.

“Because our lives are interdependent, we carry the responsibility for ourselves, for the welfare of our family and friends, and for all living beings in the world. Interdependence is not just a philosophy: it’s a way of life,” he has said.

This morning, reflecting his advice that we should all take individual responsibility for protecting the environment, he met with an enthusiastic group of children from the local Bodhi Tree School and joined them in cleaning the local area.

The school is currently leading a campaign in conjunction with students from Magadh University to clean up the environment. The Karmapa has a long-standing connection with the Bodhi Tree Educational Foundation, a non-profit organisation which supports and helps develop educational programmes for children and their families in Bodhgaya and Bihar. The organisation provides schools and vocational training, healthcare and courses in safer childbirth and neo-natal care, as well as nutritional and medical support for children.

Before they began this morning’s street cleaning activity, the Karmapa was asked to address the students. Explaining that Tibetans have great reverence for India, particularly for Bodhgaya, the place where the Lord Buddha attained enlightenment, he explained that they call India the Arya Bhumi or Noble Land. Those who live in Bodhgaya, he suggested, have both the privilege of sharing in the nobleness of the place, and a responsibility to use that nobleness of mind to set an example which will inspire the people who come there, most of whom are pilgrims or have some spiritual purpose. He concluded by saying how much he supported and rejoiced to see the students’ efforts to protect and clean the environment, as an ideal way of both bringing benefit to those who come here and also of setting an example.

The Gyalwang Karmapa then took up a traditional broom made from thin sticks and joined the children in sweeping the dusty street and collecting litter and rubbish.

In the afternoon, the Gyalwang Karmapa left his quarters and strode down the road to the fields beside the nearby Monlam Pavilion to inaugurate the pitching of the tents for this year’s garchen – an encampment which continues the tradition established by earlier Karmapas in Tibet. Within a few days, hundreds of shedra monks will begin arriving for the annual Kagyu Gunchö or Winter Debate Session and these tents will be their home for the next two months. Later, more tents will be erected in a separate area for the nuns who will join the monks for the Kagyu Monlam Prayer Festival and stay on for their own winter debate session in January 2015.

In a routine familiar from previous years, the Karmapa took charge of the proceedings and personally demonstrated to the group of fifteen or so monks and helpers what to do and how to do it. Working together they deftly assembled the metal frame for the first tent and placed it on the already-prepared foundation. The Karmapa then co-ordinated the correct positioning of the canvas over the frame and, with the advantage of his height, helped manoeuvre it into place, prompting the monks: “One,two,three, pull!”

After six tents had been pitched, it was time for a short rest and a tea break, with cake and tea served at the work site. Then it was back to work until, as the light began to fade, the Karmapa called it a day, and returned to Tergar Monastery.